Deal tactfully with the Gulf of differences

On the eve of my departure for Qatar last week, it was reported that Hamas and Fatah, the warring Palestinian factions, who respectively control the Gaza Strip and the West Bank in Palestine, had arrived at an agreement to bury their hatchet and work together to secure justice from the Israelis for their long-suffering people. I was, therefore, both disappointed and concerned to find that the accord is making no waves in West Asia. In effect, the bulk of the Arab nations have simply put Palestine on the back burner. Palestine has not ceased to be an issue—it has simply ceased to be the issue. The Arabs are now concentrating on fighting each other.

The division is sharpest in the Gulf region. Nearly four decades ago, the countries of the Gulf, that now employ close to seven million Indians and are the single biggest source of foreign exchange for our country, besides being vital to our energy requirements and to our global trade, had come together to form the Gulf Cooperation Council (GCC). Today, the GCC is split down the middle and they are bickering among themselves as if they were India and Pakistan.

The proximate cause of this is an off-the-cuff statement made by US President Donald Trump at his gathering of Middle East potentates and dictators. The statement was aimed at uniting the Arab world against Iran, but ended dividing the Arab world between the hardliners and softer elements. This has helped Iran further strengthen its position vis-a-vis Saudi Arabia, and left Israel freer than ever to continue its excesses against the Palestinian people.

The US Secretary of State, Rex Tillerson, stopped off in Riyadh on his way to India to try to get the young Crown Prince, Mohammed bin Salman, to tone down his rhetoric. As perhaps the most influential oil executive in the 21st century, he hoped the close relationships he had assiduously cultivated with all the principal Gulf players would help him pour oil over troubled waters. But, the waters have been left so troubled by Trump’s political ineptitude and diplomatic illiteracy that the crown prince just brushed off Tillerson, and the equally young emir of Qatar did much the same. So, Saudi Arabia, in its confrontation with Qatar, has in the UAE and Bahrain its closest Gulf allies (backed by Egypt), while Kuwait and Oman try to defuse the situation by not joining the Gulf boycott of Qatar called by Riyadh. Notwithstanding the continuing efforts of the emir of Kuwait to call a meeting of the GCC to iron out differences and perhaps even restore the status quo ante, the chances of Kuwait succeeding are about equal to those of a snowflake surviving the flames of hell. 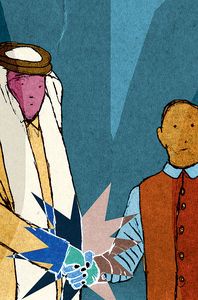 In other words, in his attempt to unite the Arab world to take on Iran, Trump has ended dividing the Gulf as never before and thus strengthened Iran as never before! No wonder Tillerson has been caught describing his boss as a “moron”.

How do these developments impinge on Indian interests? Well, any outbreak of armed conflict in the Gulf would be disastrous for our Gulf diaspora and, therefore, our key economic stake in Gulf stability. So would our interest in the Chabahar port, as the alternative to the Pakistani port of Gwadar that China is developing, be jeopardised by Trump’s threat to dump the nuclear deal with Iran. US sanctions on Iran, backstopped by the US’s Iran and Libya Sanctions Act, would hit India hard.

Under Jawaharlal Nehru, West Asia was once India’s firmest friend, notwithstanding Pakistan’s efforts to play the Islamic card. Now, as we fall increasingly into the American embrace, our national interests in the Gulf, in particular, and, more generally, in West Asia-North Africa, have come under a question mark. Deft diplomatic footwork, of a kind that has not been much evident in the immediate past, is now imperative.