On November 17, 2017, Defence Minister Nirmala Sitharaman, defending the Rafale deal at a press conference, claimed that “the amount paid for each French fighter aircraft was much lower that the one negotiated by the UPA government during its tenure”.

However, said The Indian Express report the next day, although “she was repeatedly asked by the journalists to share the comparative aircraft costs for the two governments,” she coyly refused to do so, saying that while she was not “shying away from giving figures,” she was “asking the defence secretary to share the numbers”.

Seven weeks have passed, but neither the defence secretary nor his army of officers has cared to “share the numbers”. I am not surprised. For, if he was to share the numbers officially—all of which are anyway in the public sphere—his minister would be revealed as having been somewhat economical with the truth.

For, the numbers have been revealed by the Congress spokesperson: As against the UPA price of Rs 54,000 crore for 126 Rafale jets, the present government is buying a measly 36 jets for Rs 58,000 crore. The cost per aircraft was a mere Rs 526 crore when the agreement was virtually sealed by the UPA government in March 2014. Sitharaman will be shelling out Rs 1,570 crore for each of the Rafale jets. Indeed, she has concluded the deal at over twice the cost estimated by her predecessor, Manohar Parrikar, who had indicated a price of Rs 715 crore per aircraft in the aftermath of Modi’s sudden decision, on a visit to Paris in April 2015, to scrap the nearly settled deal.

Not even the mathematical genius of Srinivasa Ramanujan could have explained how Rs 1,570 crore per aircraft could be less than Rs 526 crore. Well, the defence minister cannot, nor can her defence secretary. She expects the nation to quiescently accept her immortal words: “We have obtained a far better deal”. 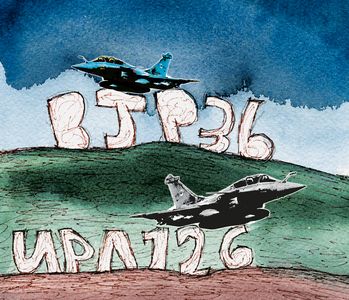 The fact is that the Modi government ditched the previous deal at the most disadvantageous moment. The French manufacturer of Rafale, Dassault, was sinking—Brazil had cancelled its order, the UAE was dithering and even the French Air Force had its reservations. Dassault’s only other confirmed customer was Egypt, but with an order so small that it was but a fraction of the life-saving order that India’s UPA government was negotiating. A.K. Antony had made the market for Rafale a buyer’s market. However, when Modi suddenly scaled down the size of the Indian purchase, Dassault lost all economies of scale. That drove up its price per aircraft exorbitantly and we were left with no alternative but to pay the seller’s price.

Moreover, by reneging on what would have been the single most dramatic example of ‘Make in India’, this government has proved that Modi’s India can make only empty jumlas (slogans).

Since Sitharaman’s defence ministry refuses to answer searing questions, the nation is left with Rahul Gandhi’s unanswered charge that the prime minister “changed the Rafale deal to benefit one businessman”, as “loot” and as a stark case of “crony capitalism”. Why has she not replied to the Congress spokesman’s query: “Why did the prime minister promote the interests of a private corporate entity over a public sector undertaking”?

For the moment, Sitharaman might be able get away with waffling. But, by the time Parliament convenes again by the end of January, she had better get her staff to come up with solid answers and a convincing comparative chart.