Filth in the White House

Like everyone in the universe, I have immersed myself in Fire And Fury, Michael Wolff’s exposé of the Trump White House. And, I am shocked—much less by the pathetic shenanigans at the highest levels of government in the United States than at the kind of language that the best and the brightest appear to routinely use.

Digestive functions and genital acrobatics figure constantly in their everyday speech. Their vocabulary never seems to extend beyond the filthiest four-letter words. Is this really the way grown-up Americans speak? Are these the descendants of such masters of the language as Thomas Jefferson and Abraham Lincoln?

Mind you, I am no prude. I went to boarding school and remained cloistered in an all-male environment all through my adolescence and through college. So, I have learned my share of dirt talk. Moreover, having been brought up with legions of Punjabis and Haryanvis, my lexicon of swear words is gratifyingly extensive.

But, at some stage—my late teens is where I would put it—one grows out of it. Wolff’s book seems to indicate that this does not happen in the US of A, particularly not if you are spectacularly successful in business or politics—or both. Worse, what Trump dismisses as “locker room” talk is by no means a male preserve in his White House. Women aides are hardly behind in routinely resorting to the most startling obscenities, and seem quite unfazed by the filth sloshing around them.

Are these, then, adolescents caught in adult bodies? Is this the language they speak in and, therefore, think in? Is this why, for all the material and military might at its command, US policy is so dangerously flawed?

Richard Nixon and his Sancho Panza, Henry Kissinger, entered the White House in 1969. Four years on came the revelation that Nixon had bugged himself. His role in Watergate was revealed largely because of the tapes on which he had indicted himself in unguarded conversations with top aides and legal counsel.

As transcripts of the tapes were released, the world was left guffawing at the number of times the expression “expletive deleted” was used to mask some gutter remark that Nixon had revelled in. As the heat rose, it seemed there were, in fact, more expletives (deleted) than any good sense in the ruminations of the president of the most powerful country in the world. His calling Indira Gandhi a “b**ch” was just par for the course. 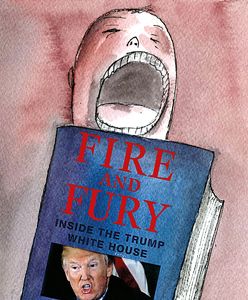 Former foreign secretary Maharajkrishna Rasgotra, in his recent autobiography, A Life in Diplomacy, tells of his explaining, as India’s deputy chief of mission in Washington, DC, in the middle of the 1971 Bangladesh crisis, that when Kissinger was caught saying Indians are “bastards”, it was meant to be a compliment in Americanese to call us a clever, cunning lot! External affairs minister Swaran Singh, to whom this explanation was proffered, looked, understandably, bemused.

The only riposte I can suggest to Americans whose mommys hadn’t washed out their mouths as children is a story told to me deadpan by an Irish diplomat—that after Noah had embarked with the animals on his ark, he retired to his stateroom for a well-earned night’s sleep, but woke with a start at the crack of dawn on realising that the animals had not been house-trained. Alarmed, he rushed to the deck and, as he had feared, the animals had made a ghastly mess all over the ark. Furious, he summoned them, sharply rebuked them all, and, handing each a pail and a broom, ordered them to wash out the decks. Suitably chagrined, the shamed animals did as they were told, and out went the muck far into the sea. “And there,” said my Irish diplomat friend, “it lay undisturbed—till Christopher Columbus discovered it in 1492”!