Mankind has seen so much change from BC to now. Adam and Eve lived on apples. Our ancestors lived on whatever was edible in the form of herbs, plants, vegetables, animals and fish to satisfy their appetite. Human beings were never satisfied and wanted to venture into eating odd things like fish roe, raw fish and raw meat because of needs and compulsions.

The last few centuries saw a paradigm shift in eating habits, and chefs started experimenting with unusual food items and made them into delicacies. Delicacies like caviar, foie gras, shark fins, frog legs and Wagyu beef have become the order of the day in most good restaurants all over the world. Bluefin tuna appeared on all good menus. Sea bass became a household name.

Today, some food is banned because of health reasons. Maybe because it is not good for kids or maybe because of swine flu or bird flu. Cultural taboos also play a very important role today. Some governments and societies ban food, yet others do not. The reasons can be varied and weird at times. The dog is a pet in one country, yet eaten in Korea, Vietnam and some other Asian countries. Can you imagine tomato ketchup is banned in France because some believe that it poses a cultural threat to classical and traditional French cuisine! Marmite is banned in Denmark because it is fortified with vitamins. Jelly sweets are banned in the European Union as the thickening agents used in coating is a choking hazard. Mind it, it is freely available in rest of the world. Haggis is a delicacy in Scotland, but banned in the USA. 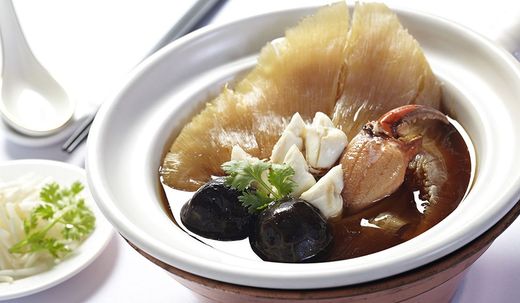 To each its own: Chinese royal sharks fin soup with crab and mushroom.

Horse meat is a delicacy in France and Italy, but is banned in the USA and the UK though Gordon Ramsay tried to put it on the menu and was criticised a lot. Chewing gum is banned in Singapore because it is a neat and clean city. Durian is banned in the metro there but available in the market. But the most surprising is the ban on samosas in Somalia by an extremist group because the shape resembles Christian symbols.

Suddenly, certain countries banned foie gras because the way they force-fed ducks was inhuman. Are we not doing the same thing to chicken feed by mixing seashells, yellow corn and other things to make chickens grow fatter and juicier earlier than their age?

Even vegetables and fruits have life in them. We should be concerned about oversized, obese vegetables because of the use of fertilisers and chemicals. Think of lady finger and chicken feet—both have life. One is plucked and the other is killed. We are concerned about chicken and goose, but not about lady finger. While one country takes a stand against endangered species like bluefin and shark, it is a delicacy for millions of people. Tomorrow, there will be too much poaching of fish, so ban it. And, millions will be deprived of their daily meal. Even in the USA, some states ban goose liver and others do not.

Will banning solve the problems? I say, no. Let people eat whatever they want as long as it is not inhuman. Even Wagyu and Kobe beef, where cows are given beer as part of their diets, might be banned in some countries. Are we living in a free society or not? Even some Arab countries allow pork rooms to serve pork as they do not want to deprive pork-eating people of their food. Politics should be left out of it.

Your form could not be submitted.
This browser settings will not support to add bookmarks programmatically. Please press Ctrl+D or change settings to bookmark this page.
Topics : #Chef's Choice | #opinion