A 25-year-old college dropout, Shravan Krishnan has dedicated his life to rescuing and caring for animals

It is playtime at Hotel for Dogs in Chennai. A dobermann jumps into the pool and swims, splashing water on the labradors by the poolside. At the far end of a ground, a golden retriever prances around, making the most of the time outdoors, before being taken back to her kennel in a nearby apartment.

As I wait for Shravan Krishnan at his boarding for dogs, a few german shepherds come near me to show their affection, and I run for my life. Shravan appears and tells me that the dogs are all friendly. “They won’t harm anyone,” he says.

As we start chatting, a cocker spaniel sniffs at me. Scared, I keep my eyes closed. Finally, we decide to go out of the hotel. “I love dogs, but from a distance,” I tell him apologetically.

Shravan has been in the news for rescuing a dog in Chennai. In a video that went viral a few days ago, a medical student in Chennai was shown throwing down the dog from his terrace. Shravan helped track down the dog, took it to hospital and named her Bhadra.

He had 49 dogs of his own when Bhadra came into his life, but the 25-year-old loves her as if she were his first pet. “I have deep respect for her. She is a real survivor,” says Shravan. “Bhadra has fractures on her hind legs and spine. She might take four to six weeks to recover.”

He has gone to court against the dog thrower. “We have Supreme Court lawyer Prashant Bhushan fighting the case for us,” he says. “He has offered his services pro bono.” 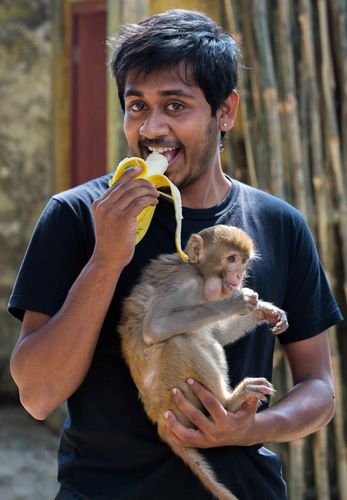 Shravan with a monkey he rescued | Lakshmi Jagan

A college dropout, Shravan has dedicated his life to rescuing and caring for animals. He founded Hotel for Dogs in 2014. It has a branch in Bengaluru now. He spends more than half the money he earns from it on rescuing and rehabilitating animals. He has rescued monkeys, pangolins, barn owls, Indian black kites and Asian palm civets. Sharvan, along with his friend Adhishwar T.A., also runs a small shelter in Chennai, where rescued dogs are given temporary boarding.

“During last year’s floods, migratory birds like pond herons, blue herons and egrets got deviated from their routes and nested in a housing community. As the hatchlings started falling down, the residents called us. We went there and tied nets under the trees, to prevent hatchlings from falling down and getting hurt or being harmed by animals,” he says.

Shravan never turns off his phone. On an average, he gets five calls a day asking him to rescue snakes. Some days, he gets 20. He says he has rescued around 1,400 snakes.

Rescues can be challenging. “A baby deer fell into a drain during the floods. One of its legs was broken and it couldn’t move. So I had to walk down the drain, which was overflowing, lift the deer and push it [to safety],” he recalls.

The deer was nearly dead. “We gave it artificial respiration. It took around three hours for it to stabilise,” he says.

All over Shravan’s body are souvenirs of such rescue operations. “I have been bitten by monitor lizards, and have survived snake bites on hands and legs many times. The most painful one, however, was a jackal bite on my thigh. It was extremely painful. Jackal saliva contains a lot of bacteria. So I had to get anti-rabies shots,” he says.

A stray dog passes by. Shravan asks me to wait for five minutes and goes after it. Later, he asks his staff to have the dog checked by a vet. “It has a skin disease called mange, which is contagious,” he says. “So we can’t put it in our shelter. We will give it medicines mixed with food.”

Does he get emotionally attached to the animals and birds he rescues? Shravan says he tries not to. “I normally don’t even name the animals I rescue. Bhadra is the exception. I do rescue operations like a skilled professional,” he says.

Shravan feels that sentiments can come in the way of taking the right call. “There was this dolphin I rescued. She was found on the shore. She had been trying hard to push herself back into the sea, but couldn’t. I knew there was no proper rehab facility in the city. So I took her in a boat and left her in the sea, hoping mother nature would cure her. Had I got sentimentally attached to her and taken her to a rehab centre, she would perhaps have died on the way,” he says.

Nothing delights Shravan more than finding a home for a dog or helping an injured bird recover. “I come from a family that loves animals. My grandparents and mom always had pets. They had dogs and squirrels,” he says.

Shravan’s father was a news photographer and he grew up watching National Geographic and Discovery channels. His childhood idols were naturalists like Steve Irwin, Jeff Corwin and David Attenborough.

Later, he started volunteering at the Madras Crocodile Bank set up by conservationist Romulus Whitaker. “Croc bank has a well-stocked library on wildlife. I would sit there for hours and read. I would also have long chats on wildlife with [conservationist] P. Gowri Shankar, who was then an educational officer at the croc bank’s centre for herpetology,” says Shravan. 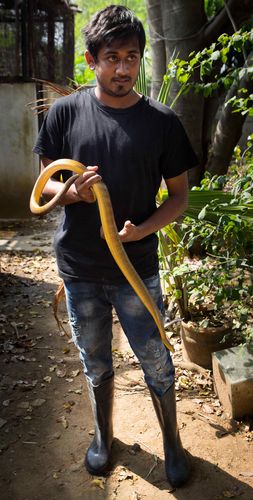 He is deeply concerned about the plight of animals in India. “Around 30 dogs were poisoned and then burnt in Chennai recently. The reason was strange—a dog bit a goat. So they killed all the dogs around,” he says. “There is abuse everywhere. Monkeys are being used by gypsies to beg. There have been instances where animals were raped by human beings. Breeders abuse dogs. Old female dogs are abandoned on the streets once they are no longer fertile. Breeders do a lot of inbreeding; the father is mated with his daughter or even a sibling. Keeping a dog in a cage throughout the day is also abuse.”

Unfortunately, the laws are not stringent enough to stop the abuse. “Though we worked so hard, the culprits in the Bhadra case were out in less than half an hour. Even if you abuse an animal, you can get away by paying Rs 50—that is the message you are going to get from this case. Animal abuse should be made a non-bailable offence. That will at least help reduce instances of abuse,” he says.

According to Shravan, the Prevention of Cruelty to Animals Act, 1960, is outdated. “We will put pressure on the government to revise the act and pass the Animal Welfare Bill, 2014. It is a pity that the bill doesn’t even come up for discussion in Parliament, despite numerous instances of animal abuse in the country,” he says.

As an animal rights activist, Shravan knows he has been making more enemies than friends. “I fought with OLX recently. They were selling dogs online. That was encouraging a lot of backyard breeders. I put a post saying what they were doing was wrong. That got 2,000 shares on social media,” he says.

Shravan has a huge online following, and he hardly gets time to respond to fan mails. “My hours are erratic. The time I wake up depends on the time the rescue gets over the previous night. Sometimes, rescue goes on till 5 in the morning,” he says.

By 11, he is off to work. He spends time with the dogs at Hotel for Dogs and checks the accounts. “Back when I started, there were no good boarding centres in the city. When I left my dog at some place, he came back with a lot of parasites. He even fell sick. I had to miss a lot of tours because there was no place to leave him and go. Sitting at home made me think about this,” he says.

The daily boarding charges for a dog is Rs 300 to Rs 600, depending on the breed. The Chennai facility can accommodate 40 dogs at a time. “I have boarded around 4,000 dogs here,” he says.

Shravan is an avid traveller. “Most of my trips are associated with wildlife,” he says. Beyond animals and wildlife, the only passion he seems to have is cricket. He was part of the state cricket team for nine years.

I wonder why an intelligent person like him would drop out of college. Would you mind revealing what happened, I ask. “Animals happened,” says Shravan, smiling as he hurries on to watch The Secret Life of Pets, an animated movie on what pets do when their owners are not around.