Off with their heads 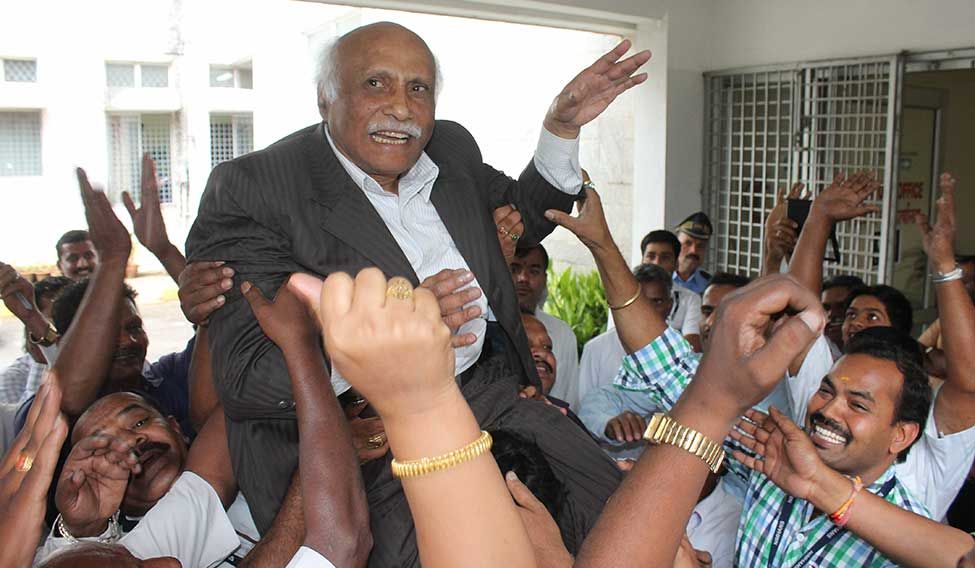 Exit procedure: Dr Pradhan with his supporters at the NIMHANS campus.

NIMHANS director in-charge embarks on a termination spree, throwing the premier institution into a major crisis

It has been a turbulent week for the National Institute of Mental Health and Neurosciences, Bengaluru. The country’s premier institute of mental health and research witnessed events unprecedented in its history as its director in-charge Dr N. Pradhan went on a termination spree from July 24, not even sparing former director Dr Satish Chandra, who was serving as senior professor.

Others who have been sacked or removed from their posts include registrar in-charge Dr V. Ravi, three department heads, a doctor and eleven clerical staff members. Ravi was replaced by K. Shekar, head of the department of psychiatric social work, who has been named deputy director, administration. Pradhan said he had not terminated anyone. “Some retired people who were taken in as consultants have been asked not to continue in service,” he said.

Pradhan seems to enjoy the support of the lower grade staff. The NIMHANS Employees Union took to the streets on July 25 to express solidarity with him. “Our union has demanded for long that the retired staff who had been reappointed should be removed from service. Now, the director has taken some measures towards this, which he hopes will catalyse changes for the betterment of the institute. Unfortunately, the faculty is at loggerheads with him,” said union president J. Murugan. The union has started a signature campaign to extend Pradhan's tenure as he is due to retire by the end of July.

The NIMHANS Faculty Association, however, has submitted a statement to the joint secretary of the Union ministry of health, alleging that the department heads were removed “without any attributable cause or inquiry.” It said the move to terminate the services of Chandra, a permanent employee, was done “arbitrarily by the director and without any orders from the ministry.’’ But Pradhan said Chandra's tenure had come to an end and it was unlikely that he would get an extension. “I have asked him to get a letter from the ministry of health to continue as a senior professor,” he said.

The members of the faculty association had requested an urgent meeting with Pradhan on July 24 to discuss outstanding issues. But he refused to meet them. Subsequently, they have written a letter asking him to reverse all decisions he had taken after June 30. Karnataka Health Minister U.T. Khader said the state government would take up the issue with the Union health ministry.

Pradhan was reluctant to respond to queries from the media. "My wife has asked me not to speak to the media," he said. She never wanted him to be director. She was abroad when he applied for the post of director earlier, and he did not tell her about it. That time, Chandra, who was Pradhan's student, got the post, despite Pradhan's seniority. He said he had always regretted whenever he had gone against his wife's wishes.

Amidst the ongoing feud, the institute was scheduled to host President Pranab Mukherjee on July 28 for the inauguration of the magneto encephalography unit and the dedication of its revamped heritage building to the nation. The programme has now been postponed following the death of former president A.P.J Abdul Kalam, but it has given the warring factions a chance to interact with the Union health ministry officials to put forward their respective points or perhaps even to find an amicable way out.