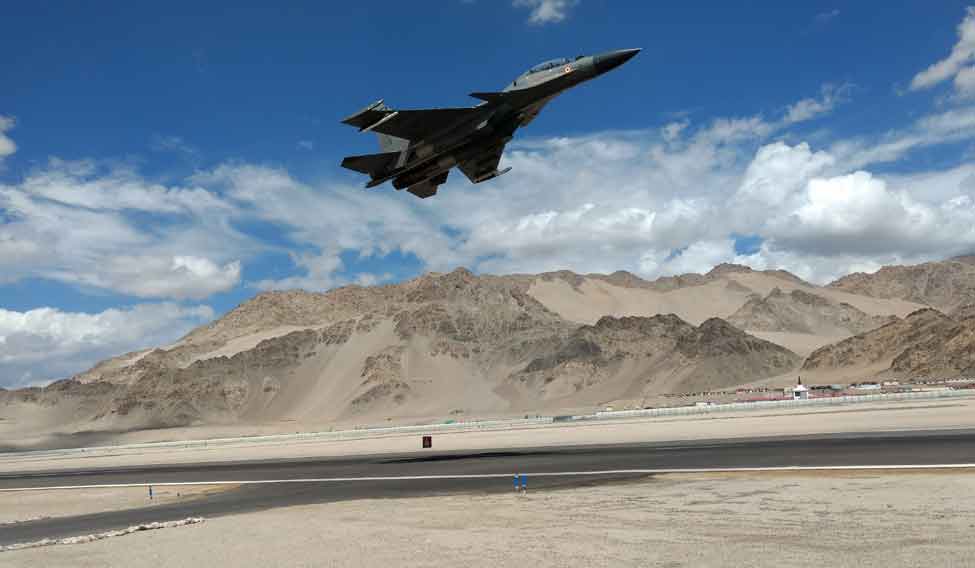 Two MiG-29 and two Su-30MKI fighter aircraft started taxiing out of their hangars in Adampur and Halwara air bases in Punjab, respectively, at around 10am. In approximately 23 minutes, they covered 800km and reached Leh, their destination. “We can take on any threat at these heights and we are sending the message across that we are ready to flex muscles, if required,” said an IAF officer.

India has deployed its fighter aircraft at the Leh airbase after the 1999 Kargil war. And, now, the IAF is planning for a two-front war with China and Pakistan. It is also catering to the enhanced deployment of the Army in eastern Ladakh, including areas such as Daulat Beg Oldi (DBO).

After the April 2013 incursion in DBO close to a newly-laid air field of the IAF, officers said the area had a similarly treacherous terrain like Siachen. “Being there serves no military purpose, but China seems to have sent its troops to make us commit more troops in the area,” they said. It forced India to move in a whole reserve brigade from counterinsurgency operations to the barren Ladakhi deserts, and maintain the posts with helicopter support.

“The saying about Ladakh is that the land is so barren and the passes are so high that only the fiercest of enemies and the best of friends visit us. In such places, we have been made to commit troops and machines in a big way,” said the officers. India moved three battalions in the region after a Chinese battalion entered Chushul. After the incident, the Karu-based 3 Infantry Division has been given the charge of an additional brigade, the 81 Mountain Brigade, along with the existing 114 and 70 Mountain Brigades.

Two regiments (100 tanks) have been deployed in the region with the help of the IAF and a new brigade (three regiments) of tanks is being raised there. With the increased tasks, the assets of the IAF unit have been stretched as it has to cater to the requirements of nearly 100 forward posts of the Indo-Tibetan Border Police, the Army and the Intelligence Bureau in Ladakh.

Senior officers said the government spent around Rs 7-8 crore per day for operations in Siachen. A similar amount is now being spent on deployments in north and eastern Ladakh, as threat perception from China has forced India to launch a Siachen-like front in the east.