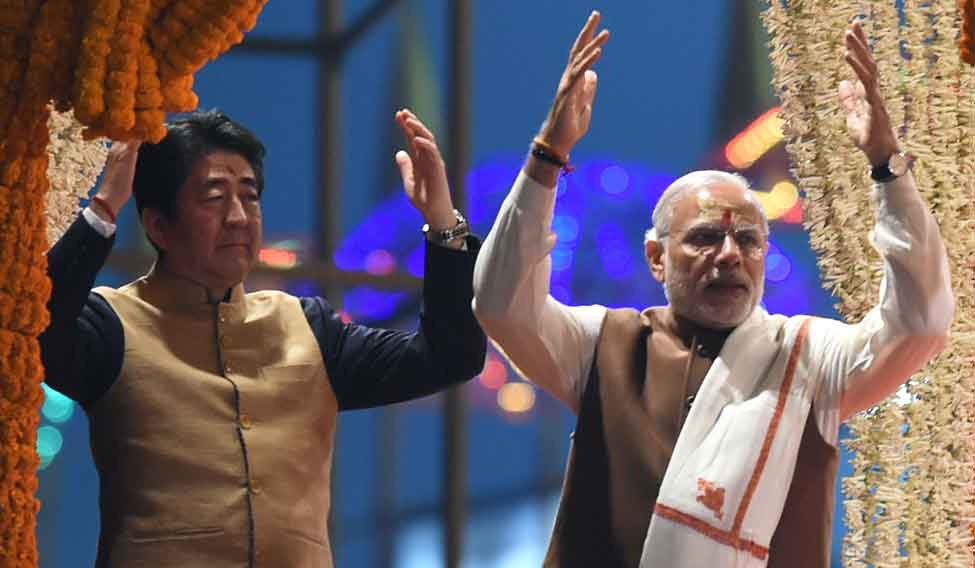 Leaders in sync: Abe and Modi during aarti on the banks of the Ganga in Varanasi | AFP

In the end of 2011, months before he returned to power in Japan, Shinzo Abe visited India as a special representative of the Japanese government. In his meetings with prime minister Manmohan Singh and defence minister A.K. Antony, he suggested a close tie-up between India, Japan and the US for containing China. He gave a speech on similar lines at the Institute of Defence Studies and Analyses, a strategic affairs think-tank in Delhi. Experts, however, found his ideas and suggestions too bold for the liking of the Manmohan Singh government.

India did not respond to the Japanese overtures as it was wary of antagonising China. It did not want the dragon to be angered in any way, even by the smallest of gestures such as turning the annual Indo-US Malabar naval exercise to a multilateral war game by inviting Japan, Australia and Singapore.

In December 2012, Abe was reelected prime minister. He continued his efforts to bring India strategically closer to Japan, but without much success. In May 2014, Narendra Modi, whose nationalistic credentials matched Abe’s in Japan, came to power in India. Abe had established good relations with Modi during the latter's days as Gujarat chief minister.

“The bonhomie between Modi and Abe could be seen even during the Indian prime minister's visit to Tokyo earlier this year,” said Niranjan Sahoo, the southeast Asia expert at Observer Research Foundation. “But the two countries really came close officially during Abe’s recent visit.”

Under Modi, the Prime Minister's Office had taken deep interest in finalising a $1.5-billion deal for buying the US-2 amphibious aircraft from Japan. It was the only deal that could not be completed during Abe’s visit, as there was difference of opinion between the defence ministry and the Navy on whether India needed the expensive aircraft.

Highly placed officers dealing with the procurement told THE WEEK that the Navy’s last-minute change of stance had created confusion. The Navy had earlier told the ministry that it did not need the aircraft. Later, it wrote to the PMO that it required six such aircraft.

Despite the confusion, the PMO insisted that the deal be mentioned in the joint statement by the prime ministers. Thanks to the PMO’s interest in making headway in the deal, it has been decided to buy six US-2 amphibious aircraft. Sources said the aircraft would be bought off-the-shelf and there would be no ‘Make in India’ element in the deal.

Strategic experts credit China for the success of Abe’s India visit, which has brought India and Japan closer to each other than ever before. “In this case, China is the elephant in the room,” said Sahoo. “Japan has its own boundary and historical issues with China. India also has a long-pending border dispute with China. The increasing Chinese hegemony in the region has played a major role in the deepening of ties between the two countries. India is wary of Chinese attempts to encircle it through its ‘string of pearls’ strategy, under which Beijing is developing ports in Myanmar, Sri Lanka, the Maldives and Pakistan, from where it can keep an eye on Indian movement, both civil and military.”

Japan has also been a victim of China’s aggression. The Chinese have been imposing air defence zones in areas close to maritime territories claimed by Tokyo. Apparently, India’s decision to include Japan as a permanent partner in the Malabar exercises was taken with China in mind. The move will “help create stronger capabilities to deal with maritime challenges in the Indo-Pacific region,” said the joint statement by Abe and Modi, indirectly referring to Chinese efforts to control the South China Sea.

“India and Japan don't have any direct claim over the South China Sea. But they, along with America and a host of other nations in the region, have been taking on China over [its restrictions on] freedom of navigation in the area,” said defence expert Deba R. Mohanty. India and China recently had an uneasy moment in the South China Sea when Indian warship INS Airavat, which was returning to India, was warned by a Chinese surveillance aircraft to keep out of Chinese waters.

If Japan’s inclusion in the Malabar exercises was meant to be a pinprick for China, it certainly worked. Even before Abe landed back in Tokyo, a Chinese foreign ministry spokesperson expressed her country's displeasure over the move to include Japan in the war games. In 2007, when Japan had taken part in the Malabar exercises, China had protested. India responded by keeping Japan out of the naval exercise for the next seven years. “This time, however, it does not seem India will give in to the pressure from external quarters,” said Sahoo.

Another move that will have the potential of evoking a strong response from China is the agreement between India and Japan to fund the construction of roads in northeastern states, including Arunachal Pradesh which China claims as its own territory. “India, as a policy, had kept the northeast out of its roadmap for several decades. But, with New Delhi getting Japanese help to fill the gap, it is bound to get a Chinese reaction,” said Mohanty. 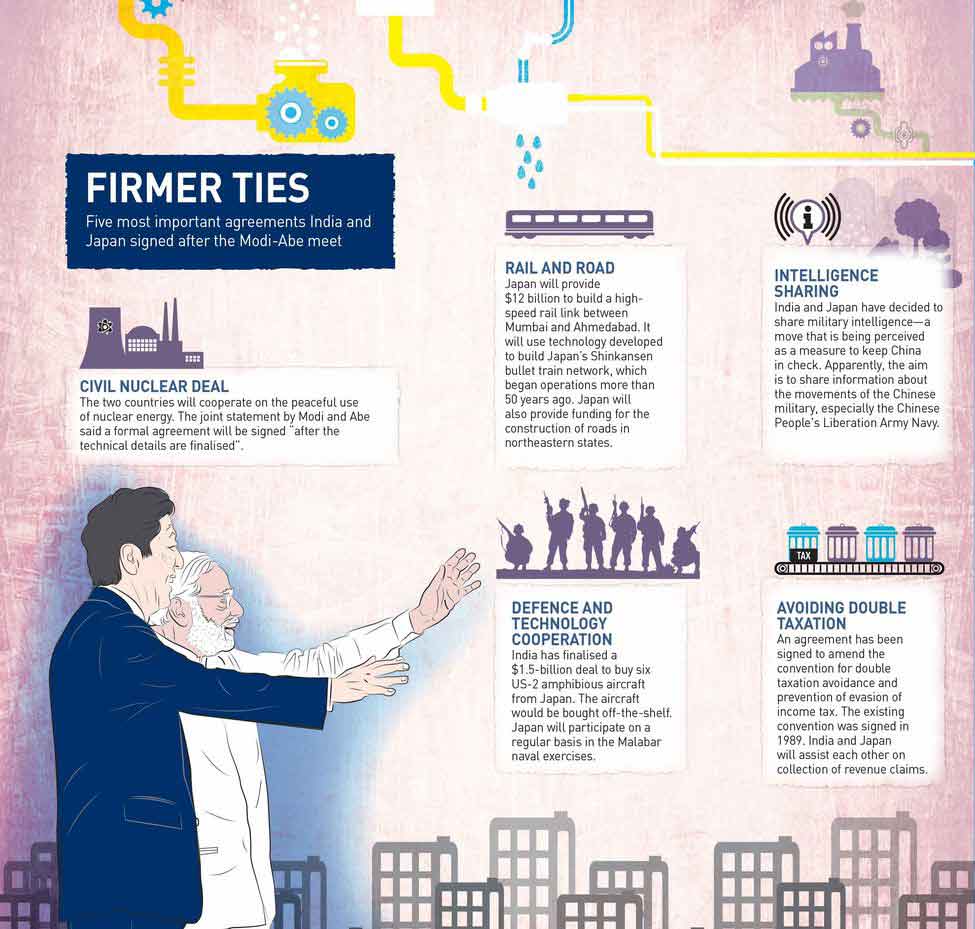 The agreement between India and Japan to share military intelligence also seems to be aimed at China. The two countries are likely to share with each other information about the movement and actions of the Chinese military, especially the Chinese People's Liberation Army Navy, which has been on an expansion spree in terms of expeditions outside its waters.

Apart from a $12-billion deal to start a bullet train service linking Ahmedabad and Mumbai, the two countries signed a civil nuclear deal, which had been hanging fire for years. “There was a trust deficit between India and Japan over the issue owing to the experiences in Hiroshima and Nagasaki. But the Indian leadership has been able to do away with the doubts,” said Mohanty.

Japan had been seeking tougher safeguards from India, which has not signed the nuclear nonproliferation treaty. India declared that it has self-imposed moratorium on further nuclear tests. “The key part has been done,” said Foreign Secretary S. Jaishankar after the two countries signed the deal, which has to be ratified by the Japanese parliament. Abe said Japan would review the deal if India decides to conduct nuclear tests in the future.

The visit boosted the prospects of the Make in India programme, as Abe agreed to invest $12.4 billion to spur manufacturing in India. The commercial agreements between India and Japan may have hogged the headlines, but the biggest take-aways of the visit have been in the fields of strategic and defence ties.

Experts credit the bonhomie between Modi and Abe for taking the bilateral relations to new heights. “There is a lot of personal trust between the two leaders, who have known each other for almost a decade now,” said Sahoo. “The nuclear and defence deals could have taken place during Manmohan Singh's visit to Japan. But then, the Japanese did not trust him as a leader. In Modi, they see a decisive and able leadership in India.”

With India moving close to ‘US bloc countries’ such as Japan and Australia and forming an unprecedented military alliance to contain China’s rise, Modi will have to do some balancing act during his visit to Russia next week. “It appears that the Modi government is redesigning and reframing the foreign policy objectives of the country and this includes arms diplomacy as well,” said Mohanty. “While the US bloc is business, Russia is an old-time strategic friend. I think the Indian arms market and military modernisation projects will keep both the US and Russia interested in it.”