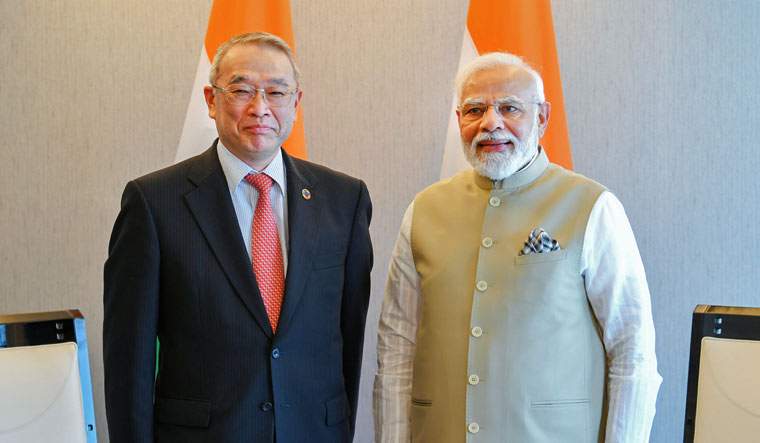 Prime Minister Narendra Modi with Chairman of NEC Corporation Nobuhiro Endo during a meeting in Tokyo. PM Modi is in Japan on a two-day visit to attend a summit of the Quad leaders | PTI

China on Sunday launched a broadside against the Indo-Pacific strategy of the US ahead of the summit of Quad leaders in Japan, saying that it is "bound to fail" as it is vigorously promoted by Washington to "contain" Beijing.

Chinese Foreign Minister Wang Yi said that the Indo-Pacific strategy "cooked up" by the US, in the name of "freedom and openness", is keen on forming "cliques". China claims that the grouping intends to "change China's surrounding environment".

The "Indo-Pacific strategy" is causing more and more vigilance and concern in the international community, especially in the Asia-Pacific region, Wang said while responding to a question at his joint press conference with Pakistan counterpart Bilawal Bhutto Zardari in the southern Chinese city of Guangzhou.

This was Bilawal's maiden visit to China after he took over as foreign minister following the fall of the Imran Khan-led government last month.

The US "Indo-Pacific Strategy" is bound to be a failed strategy, Wang said in the comments posted by the Chinese Foreign Ministry on its website.

His comments came ahead of the Quad summit to be held in Tokyo on May 24 in which US President Joe Biden, Prime Minister Narendra Modi along with his counterparts from Japan and Australia will take part.

China refers to the area as Asia-Pacific region and is averse to the Indo-Pacific strategic concept which has gained prominence during previous President Donald Trump's tenure and vigorously pursued by his successor Biden.

The Asia-Pacific should become a plateau for peaceful development, rather than a geopolitical arena. Attempts to turn the Asia-Pacific into a bloc, NATO or Cold War will never succeed, Wang said.

The Quad grouping of the US, Japan, India and Australia focussed on free and open Indo-Pacific while Beijing likens it to 'Asian NATO' aimed to contain its rise.

The US, India and several other world powers have been talking about the need to ensure a free, open and thriving Indo-Pacific in the backdrop of China's rising military manoeuvring in the resource-rich region.

China claims nearly all of the disputed South China Sea, though Taiwan, the Philippines, Brunei, Malaysia and Vietnam all claim parts of it. Beijing has built artificial islands and military installations in the South China Sea. China also has territorial disputes with Japan in the East China Sea.

The Quad's purpose is to contain China and make Asia-Pacific countries serve as "pawns" of the US hegemony, Wang said.

What is particularly dangerous is for the US to shed its disguise, provoke and play the "Taiwan" and "South China Sea" cards, he said.

"Try to mess up other regions and then mess up the Asia-Pacific region as well. Facts will prove that the so-called "Indo-Pacific Strategy" is in essence a strategy of creating division, inciting confrontation and undermining peace, he said.

"No matter how much it is packaged or disguised, it will inevitably fail in the end. The people of this region should tell the US that the outdated Cold War scenario should never be repeated in Asia, and the turmoil and war that are taking place in the world should never happen in this region," he said.

Wang said the Indo-Pacific concept is not only trying to erase the name "Asia-Pacific" and the effective regional cooperation architecture in the region, but also trying to wipe out the achievements and momentum of peaceful development created by the concerted efforts of countries in the region over the past decades.

He said the Asia-Pacific region has fresh memories of conflicts and confrontations dominated by hegemony and are now pursuing national stability and happiness.

There is a general reluctance among Asia-Pacific countries to take sides. The prevailing voice is that all countries should live in harmony and pursue win-win cooperation, he said.   The trend of the times in the Asia-Pacific region is to advance regional integration and build an Asia-Pacific community with a shared future, he said.

In the face of turbulence and change in the world, the region has maintained overall peace and stability. Asia was the first to break out of the shadow of the epidemic, with GDP growth reaching 6.3 per cent in 2021. This has not come easily, thanks to the solidarity of Asia-Pacific countries and the hard work of its people, Wang said.

Wang also attacked the "Indo-Pacific Economic Framework" (IPEF) to be launched by Biden in Tokyo on the sidelines of the Quad summit.

China, like countries in the region, is happy to see initiatives conducive to strengthening regional cooperation. But it opposes the plot to create a split confrontation, Wang said.

"First of all, we must draw a big question mark and see through the hidden plot behind it," he said.

First, free trade should be promoted, and protectionism in disguise should not be pursued, he said.

Asia is highly receptive to globalisation and free trade. The region has made outstanding achievements. In compliance with WTO rules, parties have established the trade goal of a free zone of the Asia-Pacific, launched the Regional Comprehensive Economic Partnership (RCEP), and established a platform for regional cooperation with ASEAN at the centre, he said.

China has vigorously promoted regional trade and investment liberalisation and facilitation. The US, on the other hand, has gone against free trade by resorting to protectionism and withdrawing from the Trans-Pacific Partnership (TPP), Wang said.