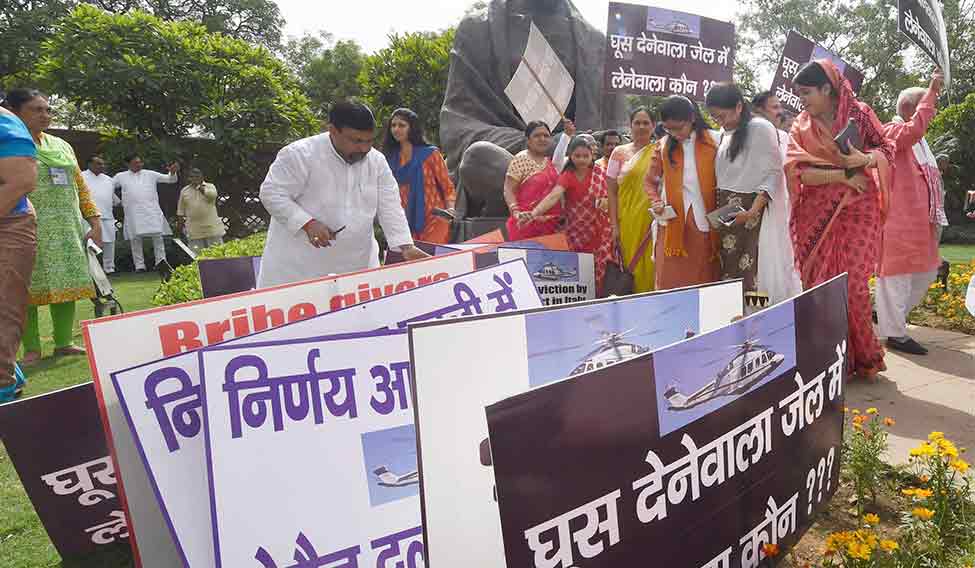 On February 6, 2010, a dining room in Delhi's Maurya Sheraton hotel saw both joy and despair. The Indian government had given Italian defence firm Finmeccanica the contract to supply 12 VVIP helicopters to the Air Force. The company was to sign the contract two days later and its officials were in high spirits. In the same room, at a table not far away, sat a despondent bunch of officials from US defence firm Sikorsky; they had been beaten for the contract.

Guiseppe Orsi, international CEO of AgustaWestland, had flown down from Italy to oversee the inking of the Rs 3,600-crore contract. Orsi had, on many occasions, lost to Sikorsky in international tenders. Now, buoyed by the victory, he sent a handwritten note and a bottle of expensive Italian champagne to the Sikorsky table. “You cannot always win,” read the note. The rivals, peeved, immediately left the venue.

Three years later, Orsi was arrested in Italy for paying bribes worth Rs 362 crore to swing the deal in his firm's favour. The issue rages on in India and, as the CBI and the Enforcement Directorate dig deep into the files, many heads are expected to roll.

The CBI has already questioned air marshals N.V. Tyagi and J.S. Gujral. The latter, according to the minutes of a meeting accessed by THE WEEK, was instrumental in placing an order of 12 choppers when the Air Force had been looking for eight.

On May 9, 2005, in a meeting held in South Block under defence secretary Ajai Vikram Singh, Special Protection Group inspector-general N. Ramachandran had suggested that the VVIP choppers should carry 40 people overall. The minutes say that, at this point of time, Gujral suggested that, to meet this requirement, they should buy eight VVIP choppers and four more non-VVIP versions.

Moreover, the minutes of a meeting chaired by former national security adviser M.K. Narayanan suggest that, while the prime minister's office wanted the operational requirements to “broadly conform to the parameters of the Mi-8 helicopters” already in use, these were later changed. 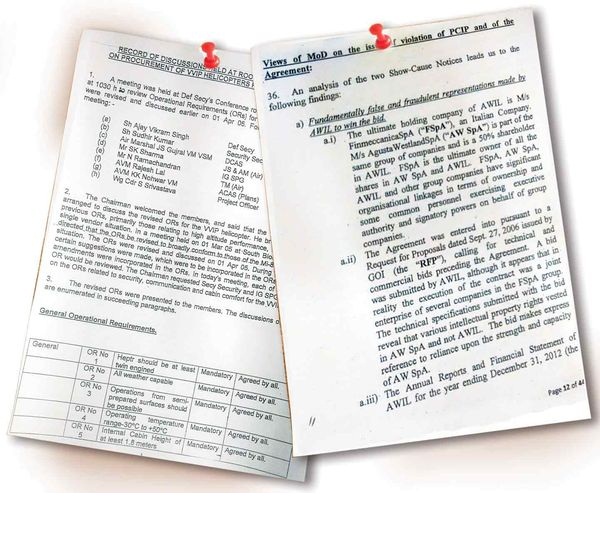 Paper, plane: A document shows that the required internal cabin height of the helicopter was changed to 1.8m; (right) a defence ministry document explaining the false representations made by AgustaWestland International Limited.

According to the documents, one of the parameters—the required height of the helicopter's internal cabin—was changed to 1.8m, making the competition for the contract more restrictive.

Also, defence ministry documents accessed by THE WEEK raise questions about the legitimacy of AgustaWestland International Limited as the original equipment manufacturer of the AW101 helicopters. According to the documents, “The ultimate holding company of AgustaWestland International Limited (AWIL) is FinmeccanicaSpA, an Italian company. AgustaWestlandSpA (AWSpA) is part of the same group of companies and is a 50 per cent shareholder in AWIL. [The] group companies have significant organisational linkages in terms of ownership and some common personnel exercising executive authority and signatory powers on behalf of group companies. The bid was submitted by AWIL, although it appears that in reality the execution of agreement was a joint enterprise of many companies in the Finmeccanica group, and the various intellectual property rights were with AWSpA and not AWIL.”

Defence Minister Manohar Parrikar said that the bid was issued to AgustaWestland Italy, which does not manufacture helicopters, but the response was submitted by its subsidiary in the UK, where the choppers were actually manufactured.

Officers in the defence ministry's acquisition wing say the Indian Coast Guard had earlier blacklisted AgustaWestland, in a different helicopter tender, for a similar discrepancy—the tender was issued to the Italian address of the firm, but the response was submitted from its British address.

The CBI and the ED, which have been asked to go all out on the money trail hunt, have prepared a list of people to be investigated, including Air Force officials and bureaucrats who were associated with the deal. This includes air marshals Gujral and Tyagi (whom the CBI has already questioned), Air Marshal R.K. Sharma and former air chief marshal N.A.K. Browne.

The government is also expected to investigate a senior Congress leader who had recently met alleged middleman Christian Michel at his hideout in Dubai.

Michel, whose driver Narayan Bahadur has been picked up for questioning by the CBI, has denied meeting any of the top leaders in India, including Congress president Sonia Gandhi, then defence minister A.K. Antony or Prime Minister Narendra Modi, but admitted to meeting former air chief marshal S.P. Tyagi at the Delhi Gymkhana Club.

CBI sources say Michel has to be interrogated to determine whether the chopper scam will be taken to its “logical conclusion”, as Parrikar put it in Parliament.

Like in the Bofors scam, apparently everybody agrees that there is corruption in the chopper deal, too. However, so far, nobody in the political circles has been apprehended with links to the kickbacks.