Demand for power peaks in the late afternoon and early evening 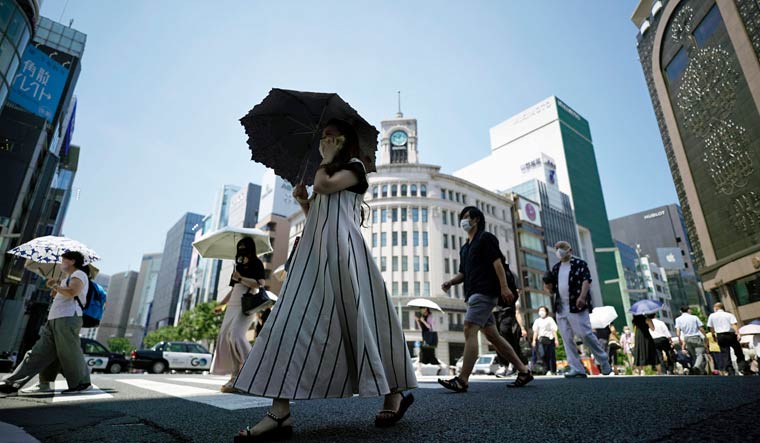 People walk over a pedestrian crossing under an intense sun Tuesday, June 28, 2022 | AP

As parts of Tokyo witness record high temperatures, residents are being asked to conserve energy to help protect power grids. The Meteorological Agency said on Monday that the rainy season has ended for the Kanto-Koshin, southern Kyushu and Tokai regions, the Japan Times reported.

“We ask the public to reduce energy consumption during the early evening hours when the reserve ratio falls,” Yoshihiko Isozaki, the deputy chief cabinet secretary, told the Guardian.

The Japanese meteorological agency forecast a temperature of 35 deg C for the city, throughout the day and similar temperatures for the rest of the week. In Isezaki, a region north of Tokyo, the temperature rose to 40.2 degrees on Saturday, the highest ever for June, ABC News reported.

The government requested that people switch off lights when not in use and restrict the use of air conditioners while asking them to be wary of heatstroke. According to Tokyo Electric Power (Tepco) demand for power peaks in the late afternoon and early evening. Tokyo is currently witnessing the worst streak of hot weather in June since 1875, Reuters reported.

Japan goes to the polls on July 10 to elect half of the 248-member upper house or the House of Councillors. And as per polls, most voters have picked the cost of electricity and prices of essentials as the main concerns.