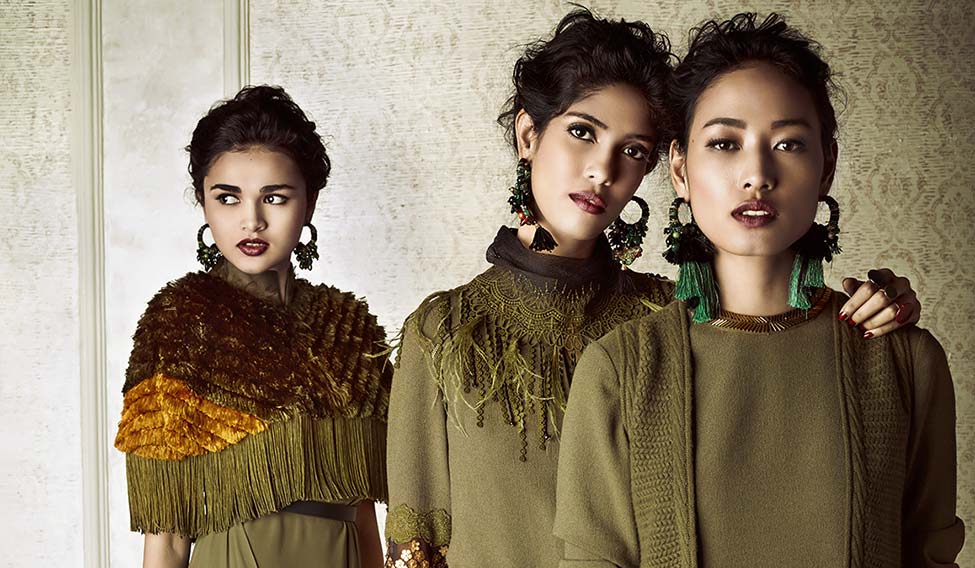 Velvet walks into the wardrobe again, making it the hottest trend of the season

Spardha Pandey looked resplendent at her brother’s wedding early last year. Unlike others, the 27-year-old Delhi resident chose velvet for the big day and dazzled in a blue embroidered lehenga. “Velvet takes me back to the days when kings used to don it. I chose it because it made me feel like a princess,” she says. “I thought it was an ideal outfit for the wedding because it reflects luxury and richness.” It was so well embroidered that she gave heavy accessories a miss and yet stood out.

Fashion designer Tarun Tahiliani says no fabric can replace velvet because of its royal look. But owing to its cost and thickness, raw silk, dupion silk and lightweight suedes took its place. However, it has made a comeback because of the varied ways it is used. “Velvet disappeared from the runway because of its thickness. However, its sheen and texture are irreplaceable,” he says. “Techniques like velvet applique, using velvet sequin or cutouts in embellishments, velvet tapes and braids, printed velvet yokes and borders are some of the twists that velvet has seen this year along with quilting the velvets.”

Indian designers took a nostalgic route this year and brought a myriad of yesteryear’s trends back on the runway. However, a common fabric that bound the fashion honchos was their love for velvet. Designers are reinventing the fabric in a contemporary manner. Velvet has been complemented with zardosi and zari embroidery and has been vividly used either in the entire outfit or in the form of borders with embellishments or at hemlines in the form of ruffled ends. A plain velvet dupatta is also being used to uplift the outfit.

Designers like Manish Malhotra, Tahiliani and Sabyasachi Mukherjee added their creativity to refine traditional outfits with their exquisite works and cuts. Who can forget Malhotra’s eye-catching Persian-inspired collection that gave a vision of royalty at the Couture Week 2016? The designer presented his line by using darker tones of blue and maroon, which have become a hot seller this season.

Malhotra also added funk to lehengas, gowns as well as blouses. He used ruffles and gave brides a new trend to adore—maroon Bardot blouses in velvet. “Velvet is a fabric that has always been directly associated with luxury and glamour. It works great when designing something ornate since it is very durable in nature as compared with, say, chiffon,” he says. “In my couture collection, The Persian Story, I have created opulent pieces using sheer fabric and aged velvet with intricate hand-woven gold embroidery on lehengas, jackets over cigarette trousers, exquisite gowns and regal sherwanis. Embroidery and layering on velvet has been doing very well this wedding season.”

Manish Malhotra used darker tones of maroon in his creations.

Raunika Sood, design head, Raunika’s Couture, added a velvety touch to her attire for a function by adding a red velvet dupatta to her sharara. “Known for its aesthetically appealing look, velvet defines elegance,” she says. “I wore a black and red printed sharara and added a red dupatta in velvet to it to give it a rich look. The dupatta had gold and silver work in zari embroidery with gota patti borders. It was heavy and I loved the way it added the shiny look to my attire.”

A lot of credit for bringing out velvet as a style statement goes to Sabyasachi Mukherjee for his ‘Firdaus’ collection. It knitted a serious love affair between the brides-to-be and velvet. The designer presented his collection in reds and olive greens and used pastel hues, floral prints as well as zari embroidery. He also paired embroidered velvet lehenga and dupattas with plain blouses.

On the other hand, Masaba Gupta added a hint of velvet in her collection by bordering the sari with this rich fabric. People, too, are getting inspired from designers. Jaspreet Singh Lamba, 29, who recently got married, chose a velvet stole to go with his golden sherwani for his D-day. “I like velvet. Unfortunately, I was looking for a light-coloured sherwani for my wedding. However, I made sure to add sheen to the look by carrying a red-coloured stole in velvet,” he says.

Designers are also working hard on its wearability. Tahiliani says velvet used to be a thick fabric, not entirely appropriate for Indian summers, and was expensive. But that has changed. “Velvet can be worn throughout the year now due to trend-oriented designs that make outfits look attractive and not gaudy,” he says.

The acceptance of velvet today, as compared with a decade ago, has doubled because designers are bringing out more colours along with more experimental garments. “It is now becoming a part of everyday outfits like dresses and coats and other garments,” says fashion designer Ritu Kumar. “Maroon and black are no longer the only colours that define velvet—blue, green, beige and gold are taking the runway by storm.”

* Always use a steam iron. Regular iron leaves an imprint on the fabric, making the outfit unwearable.

* Dryclean your velvets, every time.

* Avoid making folds in velvet outfits. With every fold, the lines go deeper and darker over time and crack up the fabric permanently.

* Velvet blouses with a lehenga or sari are back with a bang.

* Opt for velvet coats, waistcoats and tops, paired with pants.

* Velvet gowns and skirts in dark shades are a safe bet.

* Men can choose velvet bandhgala, kurtas or a blazer for a soiree.

* Step into a velvet jutti and walk away in style.

* Wear a lightweight velvet outfit if you are voluptuous. A heavy outfit makes you look fuller.