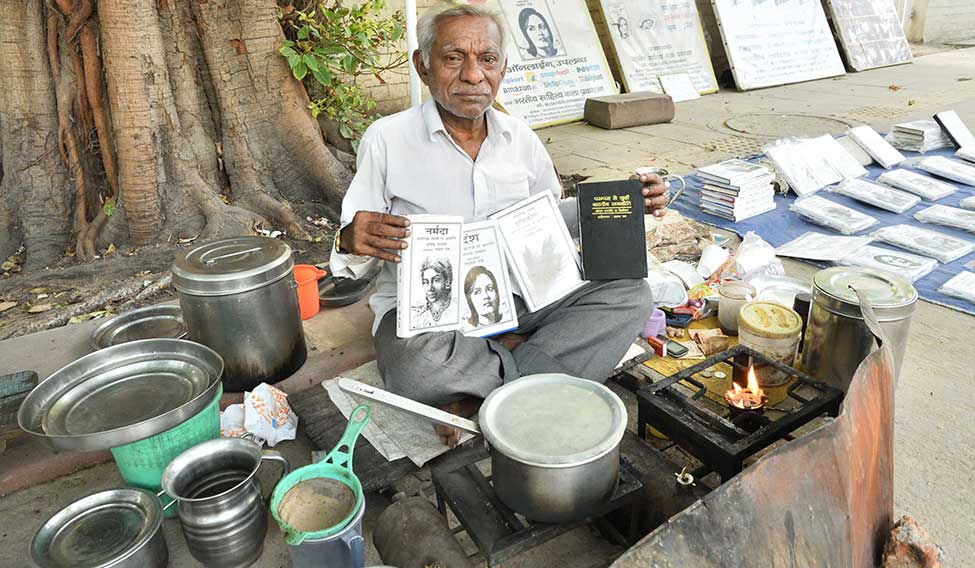 This sidewalk tea-seller has authored and published 25 books

Laxman Rao, 65, a tea-seller in New Delhi overcame all odds to publish 25 books in Hindi. His works—ranging from fiction and plays to analyses of Indian politics and economy—are now sold through e-commerce websites and Kindle.

Rao’s journey as a writer began in 1977, under a tree, on the pavement outside Hindi Bhawan at Vishu Digambar Marg in ITO, New Delhi. You can still meet him there, and buy a cup of tea for Rs 10. His desire to write was fanned by Gulshan Nanda’s books, some of which—Sharmeelee, Kati Patang Daag and Khilona—became Bollywood movies. “Surprisingly, what started as an interest in my teenage, developed into a passion. This passion made me write in Hindi, like Nanda, even though Marathi was my mother tongue,” he said.

Rao’s journey to Delhi was not easy. “Before coming to Delhi, I worked as a servant at a doctor’s house in my village for two years,” he said. “Then he got me a job at a spinning mill in 1970, when I was 22. I worked there for five years before the mill shut down. Then I went back to my village and briefly took up farming.”

But, he wanted to pursue his passion. He borrowed Rs 40 from his father, went to Bhopal and worked there for three months. “After earning Rs 90, I came to Delhi in July 1975. I had to settle for odd jobs, sometimes as a labourer and sometimes as a cleaner in dhabas,” said Rao.

In 1977, Rao started selling paan and cigarettes at Vishnu Digamber Marg. In his free time, he read the translated works of Shakespeare and Tolstoy. In 1992, Rao wrote Ramdas and Nayi Duniya Ki Nayi Kahani. Publishers rejected both.

“One of the publishers said ‘get out’ and another one informed me about the costs involved in publishing,” he said. He decided to self-publish and saved money towards this. And, in 1979, he opened Bhartiya Sahitya Kala Prakashan and published Nayi Duniya Ki Nai Kahani for Rs 7,000. By 1981 the story of his life and his books had made him the talk of the town and he was invited to meet Prime Minister Indira Gandhi.

“I met Indira Gandhi on May 27, 1984, at Teen Murti Bhawan at an event commemorating Nehru’s death anniversary,” he said. After the meeting, he scripted a drama called Pradhanmantri and also published an anthology of Indira’s speeches. In 1995, Rao started selling tea at his shop. And, the books kept coming.

All his books—Narmada, Renu, Paanch Pratinidhi Kahaniya and Dansh, to name a few—were inspired by real-life incidents and people. Renu was a girl from the college across the road from his shop; she overcame poverty and her father’s alcoholism to get a good job in the city. After the success of this book, Rao met then President Pratibha Patil.

Today, Rao is a one-man publishing house—he writes, publishes and then cycles to rural markets to sell his books. Rao also visits schools and colleges to address students. The sale of books at the tea shop brings in around Rs 8,000 a month. Then there is the income from e-tailers.

Rao hopes to wind up his shop by the end of this year so that he can focus on writing. His latest book, Patiyon ki Sarsarahat, is scheduled to release in two months.

The ‘tea-seller-cum-writer’ is famous outside India and gets visits from foreigners. Several international universities also pay him royalties for the right to publish anecdotes from his life. He plans to get his books translated to English as foreigners complain that the language-barrier stops them from reading his works, Rao said.