The traveller is strong-willed and demands that he/she be the protagonist and orchestrator of the journey. Vacationing is no longer a pastime, but a necessity for the new-age traveller.

It is the traveller’s yearning to make the best out of a trip that has kept tour operators on their toes. Innovation, like in every other field, defines their brand, as they function as the medium between the ever-changing tourist and the destination. The organised travel sector is evolving from the traditional packaged holidays to ones tailored and curated to the backpacker’s preferences.

Market analysis by Indian start-up and market leader MakeMyTrip reveals the sector’s colossal growth in recent years. Among other factors, there has been a surge in last-minute bookings, increase in the average vacationing period and a strong hike in the average spending per person. 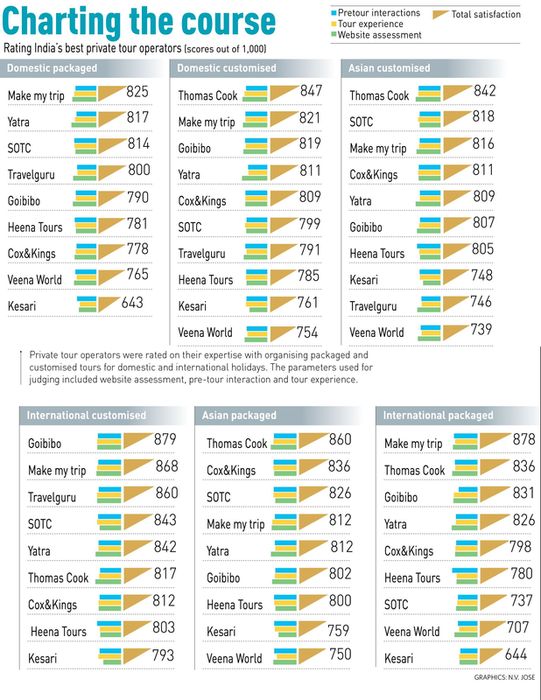 “Vacationing for Indians is no longer a see-as-much-as-you-can whirlwind tour. Rather with an increasingly discerning palate, ‘experiential’ is the new Indian traveller’s mantra,” says Mahesh Iyer, COO of Thomas Cook India. India’s millennials, says Iyer, are explorers for whom travel is non-negotiable, always on the lookout for the experimental off-beat journey.

But no trend in the industry has been as persistent as the homestay concept. The reluctance to stay in hotels, and a preference for a homelier atmosphere, gave rise to operators successfully playing middlemen for homestays, village stays and time-sharing.

Focused group discussions conducted as part of THE WEEK-MaRS travel survey identified that this cheaper, flexible and low-key option, though significantly developed abroad, is yet to mature and be properly welcomed in India. Eyeing the potential in the new trend, Thomas Cook India joined hands with international pacesetters Airbnb to introduce the concept domestically.

The co-founder and CEO-India of MakeMyTrip, Rajesh Magow, feels that the trend is a highly underpenetrated segment. “Alternative accommodation, led by homestays, is a relatively new concept that has the potential to revolutionise the industry,” he says. “It brings accommodation options in remote parts of the country that were earlier out of reach.”

But catering to the changing demands of tourists comes with obstacles along the way. Tour operators face problems including poor infrastructure, unhygienic conditions, and concerns on sanitation and tourist security.

“E-visas had received a boost, but there are many other barriers including the lack of vernacular language interface, proper destination information, and lack of help in documentation,” says Magow.

Fragmented and nonuniform taxation across states continues to be a major hurdle for operators, coupled with the steep hike in service tax. Iyer argues that the sector, despite being a significant contributor to the country’s GDP and employment, is yet to receive the industry status.

With the increasing number of players in the market, experts believe that the massive discounts handed out have made the sector unorganised. Moreover, in the last few years, the increased demand for tickets has led airlines to stop giving commission and incentives to booking portals.

Thanks to the ease in scouting for destinations and the expectations delivered by social media, there is a spike in young travellers, says Rakesh Thomas, CEO of Mausam Holidays. “The ‘one-click-book’ concept has become a reality,” he says.

Magow believes that the Internet of Things (IoT) will play a major role in the sector’s evolution. Operators agree that tourism, like most sectors, will soon be heavily dependent on the internet.

Your form could not be submitted.
This browser settings will not support to add bookmarks programmatically. Please press Ctrl+D or change settings to bookmark this page.
Topics : #Wanderlust | #travel