'Stargazing, astro tourism and celestial events will take off in a post-pandemic era' 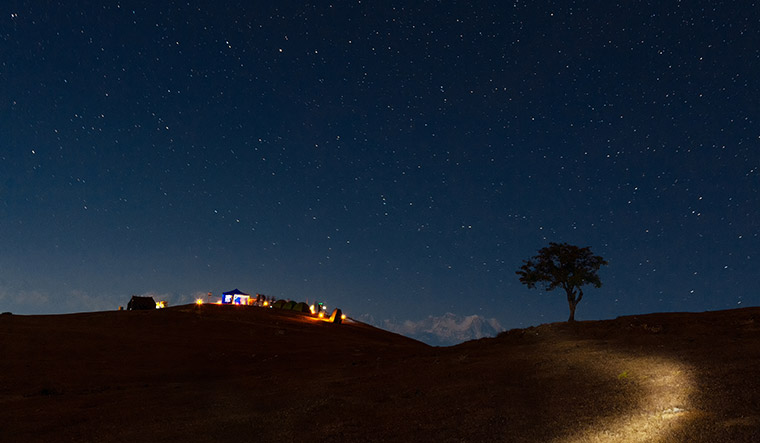 In the bugyals of Benital in Uttarakhand, there was once a deep-water lake which has now dried up, overgrown with a thicket of grass. Local legend has it that the water was so deep that an entire wedding party drowned in its dark abyss. At 6,500ft, Benital’s lush alpine meadows with unhindered views of the snow-clad Himalayas is quiet and soporific with the lilting toll of cowbells. A disputed private estate of a Delhi-based owner, Benital in Chamoli district stretches out to some 600 acres of forest; forget tourists, it is hardly known to local trekkers or guides. But on a cold, cloudless December evening, just some distance away from that dark lake, an astro party has tourists, government officials, photographers and budding astronomers milling around big bulky telescopes. Invitees are being advised to look away from their phones to get used to the darkness, so the stars appear brighter. Adjusting an 11-inch Dobsonian telescope, a 27-year-old ‘educator’ asks a monkey-cap wearing shepherd to look closer for Tycho, among the moon’s brightest craters. As soon as it is spotted, others join in and erupt into a crescendo of claps. And suddenly the whole night sky seems to be snowed upon by stars.

What makes for the perfect dark sky location where astronomers—experts and novices—can spot the brightest constellations? Essentials will have a remote, high-altitude area with zero light pollution and next-to-no radio interference. There is an organisation—International Dark-sky Association (IDA)—which tags the darkest, clearest skies in the world for stargazing in its effort to combat light pollution. Think about spotting the moonbow near the 13,803ft Mauna Kea summit of Hawaii. Or, close to the tropic of cancer, Japan’s Iriomote-Ishigaki National Park where one can expect to see 84 of the 88 constellations that the International Astronomical Union recognises. In 2020, an entire island called Niue in the South Pacific Ocean was designated as dark-sky nation. There are no Indian entries among the 180 certified International Dark-Sky Places (IDSPs) in the world. But avid Indian stargazers will rattle off a list of potential candidates, from Nubra Valley in Ladakh to Spiti Valley in Himachal Pradesh to Yercaud in Tamil Nadu. Now two amateur astronomers from a Gurugram-based company are pushing hard to put India on the global stargazing map. 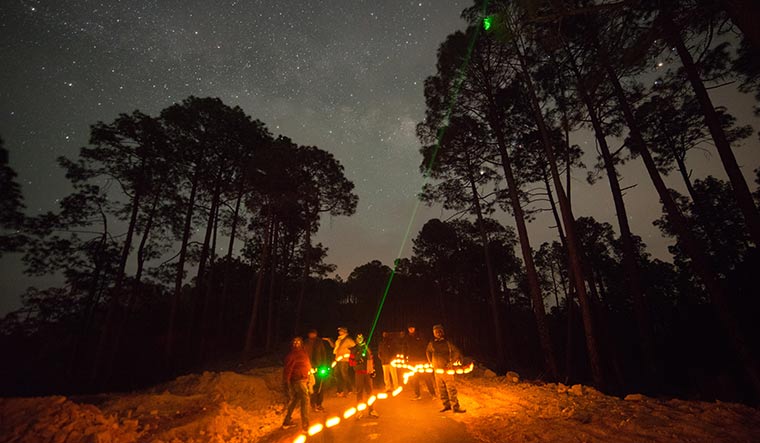 Look up: An astrophotography workshop by Starscapes in Uttarakhand | Starscapes

Astronomy enthusiast and photographer Ramashish Ray wants five million more eyes to look up to the sky at its starry best. After helming operations in telecom majors like Nokia and Samsung for decades, Ray began his entrepreneurial journey in 2019 along with former colleague Paul Savio by setting up Starscapes—”an astronomy experience platform” which hopes to build a chain of private observatories for night-sky viewing beyond academic research and commissioned studies. The first one opened in 2016 in the hill town of Kausani in Uttarakhand—it was equipped with an eight-inch computerised GoTo telescope. From there, Starscapes was realised into a scalable company. A physics grad from Delhi University with an MBA from IIM Calcutta, Ray bought his first telescope—an eight-inch Celestron CGX mount—during his stint with Nokia in Singapore which has an active astronomy association. It was there that he started hopping islands, hosting intimate star-spotting soirees for interested friends and family. Perhaps that is where the idea of an astro party with food, music and the milky-way took off. In 2021, Ray set up observatories in Alwar and Bhimtal, with Coorg and Ooty in the offing. “The pandemic brought home the truth of feeling a sense of oneness with nature, the vastness of the sky and the universe. Stargazing, astro tourism and celestial events will take off in a post-pandemic era,” says Ray from a tent pitched high up on a hill in Benital, manning an astro party comprising a motley mix of rappers, photographers, sky lanterns, top-of-the-line telescopes, a snaking thread of fairy lights, and a food-hut tossing out biryanis and kebabs. Just 100m away from the site, the state tourism department had acquired a chunk of forest land and announced the development of an astro village in 2018. Some Rs5 crore will be invested to build huts for guests and 15 people from nearby communities have been trained as astro guides by Starscapes. “Our biggest challenge will be to involve the local communities so they feel they have a stake here. And second, preserving the fragile ecology of the bugyals. This is a very niche area of tourism,” says Himanshu Khurana, district magistrate, Chamoli. 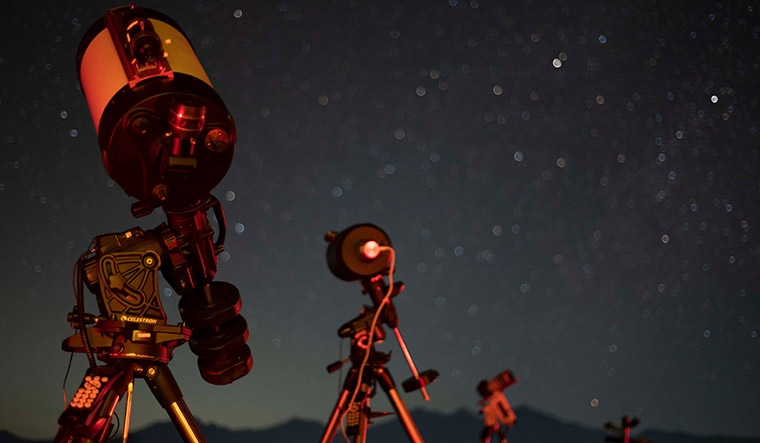 But can a relatively untouched Benital where environmentalists continue to decry its private status—the land and the lake was given to a private owner by the British in 1945—become a designated dark-sky location? “In astronomy, there is a nine-level numeric scale called Bortle which measures the degree of night-sky brightness. Class 9 on the Bortle scale means the most amount of light pollution. Delhi is 9. Benital, like Lahaul and Spiti, is Class 1 on the scale,” informs Ray, highlighting the untapped dark-sky heritage of India. “A lot many things need to be done to realise the certification,” adds Ray, who is also a member of the IDA. “But I am very motivated by the idea of getting India into the list. Then the potential of the site will become global. It is also a great long-term idea to protect the ecology of such places.”

Prateek Sharma, an educator and photographer with Starscapes, shoots a green point laser torch, its beams going 5km into the sky. He traces alphabets in the night sky to recognise stars and galaxies for a group of onlookers. “We have kids in Kausani now who are talking about black holes and nebulae,” says Sharma who until two years ago did not know anything about photography or the stars and the moon. The magic of the night sky becomes more palpable when local youngsters travel all the way to rediscover something that has always been around. Chandan Singh never got a chance to look through a telescope in spite of doing his master’s in geography from a government college in Chamoli. Looking at planets so close through the Dobsonian at the astro party, he makes a pledge: “When I start teaching, I will get the same telescope in my college’s geography lab.”