The medieval city of Mandu from a hot-air balloon 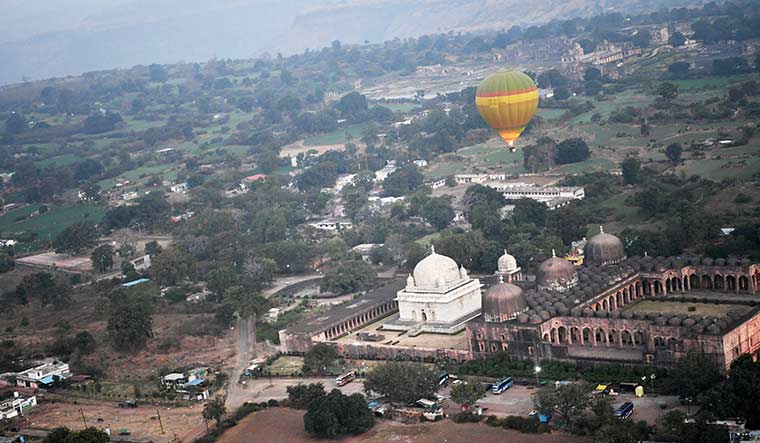 On a pleasant January morning in Mandu, Madhya Pradesh, three hot-air balloons gradually come to life on a deserted stretch of land far from the town centre. The yellow and blue balloons will soon soar, propelled by a burner that will blast flames into their throats.

We have seen them often, gently bobbing in the sky like colourful, colossal, inverted teardrops. As ours flies high up over the Vindhyan ranges, crossing lakes and ravines, jungles and farms, the passengers wonder if they will be able to see the ancient ruins of Mandu, originally the fort-capital of the Parmar rulers of Malwa. And perhaps relive the eternal love story of the poet-prince Baz Bahadur and his beautiful consort Rani Roopmati by admiring her pavilion, which gazes down at Baz Bahadur’s palace, an exquisite specimen of Afghan architecture.

But the pilot, Polish balloonist Beata Choma, urges her passengers to look beyond the forts and palaces. “The Mandu fort is 20km away. We have left it far behind. We will go where the wind takes us,” says Choma, as she regulates the burner’s flames to gain and lose height. Ready to fly: Hot-air balloons at the Mandu Festival.

It was in 1989 that Choma saw an advertisement in her school in Lublin, in eastern Poland, calling for those interested to train as glider pilots. While learning to be one, she volunteered to fly hot-air balloons. Soon, she became a judge at hot-air ballooning championships in Europe.

“But, with the coming of GPS trackers and smartphone data loggers, there was no need for such judges. That is when I became a hot-air balloon pilot,” says Choma, who now divides her time between Poland in summer and India in winter, piloting hot-air balloons from Agra to Goa to Varanasi. “Mandu has a great landscape for ballooning. It is a good mix of mountains, roads and farms. One should look for areas accessible by cars.”

Choma later demonstrates how landing a hot-air balloon is the most interesting part of the air sport, as she manoeuvres her basket out of a farm in the village of Chikli, where basil and fennel grow wild. In several hot-air balloon rides, there is the tradition of regaling the guests with a champagne toast after landing. Originally, the fine beverage was meant to placate appalled farmers in the 18th century, who would suddenly wake up to dragon-like balloons cascading onto their fields and farms. 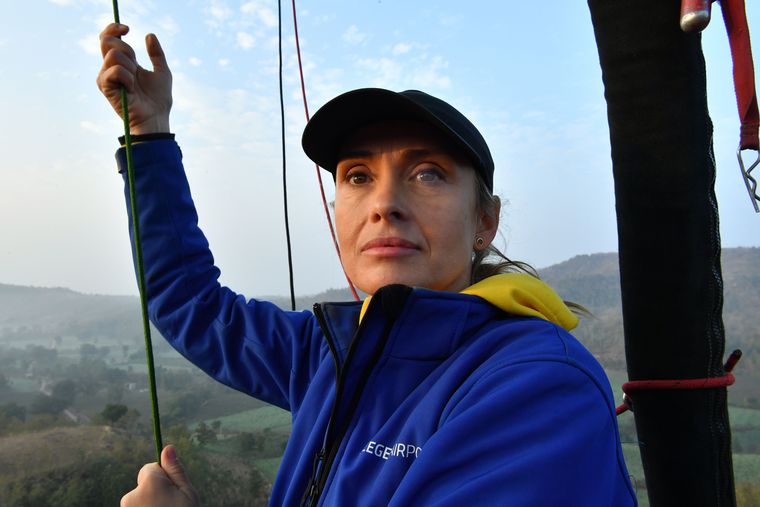 There is no bubbly in Mandu, after Choma deftly lands her balloon. But the quaint old charm of the city did receive an exhilarating lift with aerial views from hot-air balloons at the five-day Mandu Festival which concluded on January 3.

“Our focus has always been to choose something which is not available in India and see how it can elevate a destination. After we started hot-air ballooning in Bandhavgarh National Park, visitors don’t complain, ‘Tiger nahin dekha toh kuch nahin dekha’ (If we haven’t seen a tiger, we haven’t seen anything),” says Jai Thakore, COO and cofounder of E-Factor Entertainment, a leading event management company which tied up with Madhya Pradesh Tourism to introduce hot-air ballooning at the Mandu Festival, apart from setting up luxury tents, cycling trails, storytelling sessions, Instagram walks and stargazing over coffee at the dinosaur fossil park. The Delhi-based company, also known for celebrity weddings, has been operating hot-air balloons in various parts of the country under SkyWaltz Live Experiences. “Next, we will go yachting on a lake instead of the seas,” says Thakore.

There is something very literary about hot-air balloons. Almost like a French animation film, they seem elegant and breezy, fearless and funny. Jules Verne is perhaps the most popular literary figure associated with the early flight technology that uses a wicker basket and a giant bag filled with propane gas. Tourists taking selfies by decorated baobab trees during the festival.

Even before his most popular book, Around the World in Eighty Days, came out in 1873, the French novelist had already written Five Weeks in a Balloon, where three Englishmen explore the African continent in a hot-air balloon. But, funnily enough, the book—part of The Extraordinary Voyages series—is hardly ever spoken of in the same breath as balloons.

In the classic Around the World in Eighty Days, the eccentric Englishman, Phileas Fogg, wagers that he will circle the globe in 80 days. In Fogg’s epic journey, he uses elephants, sailboats, steamships, and trains. But never a hot-air balloon. Even though it is mentioned once in the novel, the idea is dropped as casually as it is put forward, despite balloons already being in vogue back then. The first ever hot-air balloon took flight in 1783 in the forecourt of the palace of Versailles, with King Louis XVI and his family watching. The first passengers of the floating balloon, or the “heroes of the air”, were a sheep, duck and cockerel.

But every mention of Around the World in popular culture and on film posters will have some representation of a hot-air balloon, exemplifying the carefree, liberated spirit of an adventurer who flies with the wind. “Why can’t we catch a train like normal people?” is a dialogue from the latest period adaptation of the novel on PBS Masterpiece. And the remark is made from a hot-air balloon.

Swapan Tarafdar, an Indore-based artist, has been painting Shadiabad (City of Joy), or what Mandu was known as in the Mughal era, for years now, re-imagining its architectural ruins and bazaars in varying water colours. At the Mandu Festival, he saw balloons floating over the city for the first time and promptly painted canvases with the new detail. “They are all sold out,” Tarafdar beams.