Vijayan and Mohana had been married for 46 years 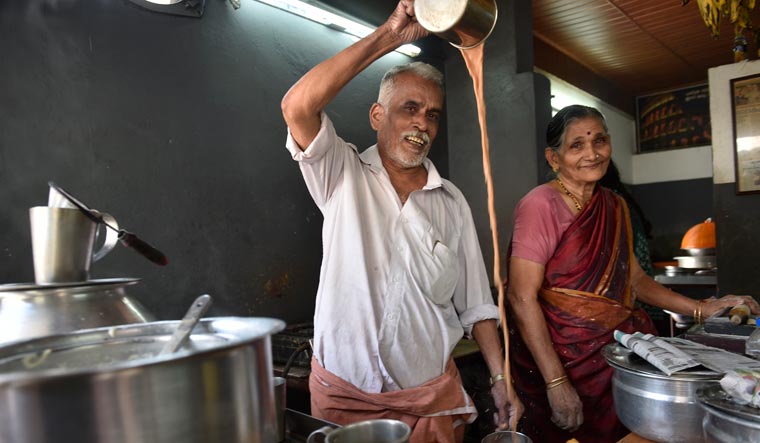 Vijayan and Mohana in their teashop | Sanjoy Ghosh

A teashop owner from Kochi famed for touring the world along with his wife is no more.

Vijayan was 71 years old. He passed away in Kochi on Friday morning. Vijayan and his wife, Mohana, ran the Sri Balaji Coffee House at Kochi’s Gandhinagar area.

The old couple, despite hailing from a humble background, used to travel around the world with income from the teashop. In 16 years, the couple had visited nearly 30 countries. Their journeys attracted the attention of commoners, celebrities and vloggers.

In 2019, industrialist Anand Mahindra sponsored their visit to Australia after learning about the couple from a YouTube video by blogger Drew Binsky.

Vijayan and Mohana had resumed their globetrotting, interrupted by the pandemic, in late October with a visit to Russia.

Incidentally, Vijayan had told THE WEEK that the sights of colourful Soviet magazines had attracted him as a child and made him curious about the sights of foreign lands. In 2019, he told THE WEEK, "My next biggest wish is to visit Russia and places like Japan—which were once the biggest superpowers in the world."

Vijayan and Mohana had been married for 46 years. They realised their dream of travelling across the world with great zeal despite advancing age and meagre income.

The couple used to do all the work at the teashop alone. The shop serves tea and snacks. The duo often set apart Rs 300 daily to meet the future travelling expenses. Sometimes, they availed loans, and after returning from a tour, they repaid the loan by working hard at the teashop.