A journey of thousand miles 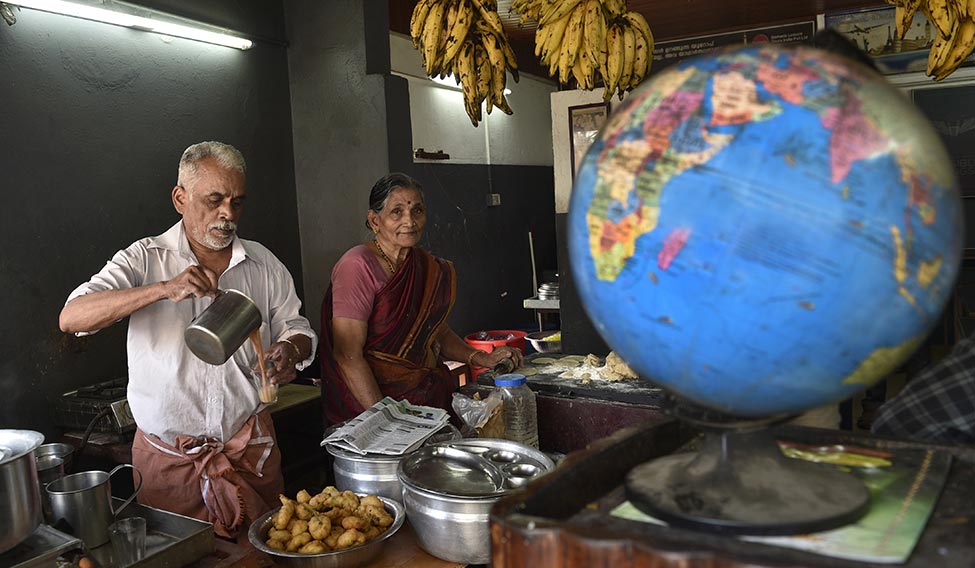 Vijayan, 65, and his wife, Mohana, 64, (in pic) have, over the years, staked everything to fulfil their dream of travelling the world | Sanjoy Ghosh

“Oh we ain’t got a barrel of money,

But we’ll travel along

In the hustle and bustle of Kochi, it is easy to miss Sree Balaji Coffee House, a nondescript wayside tea shop in Gandhi Nagar. But, K.R. Vijayan, the owner, is arguably India’s second most famous tea-seller, behind Narendra Modi!

Vijayan, 65, and his wife, Mohana, 64, have, over the years, staked everything to fulfil their dream of travelling the world. The couple, whose sole income is from the tea shop, have visited 17 countries so far.

To fund their travels, Vijayan mortgages his shop and takes a bank loan. After returning, the couple toils for the next two to three years to repay the loan and then sets out for the next destination.

“Some people say I am crazy,” says Vijayan, “Maybe I am. But, we live only once and I believe that our entire life is a journey and the experiences that we accumulate are our only earnings from life.”

He has many such experiences to recollect. But, he says that the experience that first comes to mind from his many trips is the time he boarded a Eurostar train from London to Paris in 2010. “The speed was dizzying. We covered about 750km in 1 hour and 45 minutes. Even at that speed the train was moving smoothly and I was forced to think of the way trains in India move,” says Vijayan.

His wife had not gone out of Ernakulam district before her marriage. “Initially I was really nervous,” she says. “Going abroad was like going into the unknown. Our first trip abroad was to Egypt, and it was the first foreign trip for him also. But he told me, ‘don’t be scared, I am with you’.”

She recollects their trip to the Empire State Building last year as a unique experience. “We went up 84 storeys and the wind at the top was so strong that I felt we were going to be blown away by it.” Of all the places they visited, she liked Switzerland and Paris the best.

Their daughters, both married, appreciate their parents passion for travel. Usha V. Prabhu, the younger one, works at a medical shop near his tea stall. She says she is proud to have such adventurers for parents. “They are working hard, even at this age. And going to all these places makes them happy, so we are also happy,” says Usha. Her elder sister, Sasikala V. Prabhu, is a primary school teacher at Mattancherry, 10km away.

Vijayan says that he wants to see the entire world. “That is my dream. And I have done my best to make it a reality. What God has given me in life is far more than I could have imagined,” he says.

His latest bank loan is almost repaid now and the representatives from the bank have started to visit, inquiring about the next loan requirement. And Vijayan has also locked onto his next destination. “I want to go for the Argentina-Brazil-Chile trip. The ABC trip as it is known. Argentina’s southern tip is the world’s southern end. There is only the ocean beyond that.”

He says that he has not, so far, been able to find tour operators who organised tours to that part of the world and he is looking for fellow travellers. “If anybody is interested to join me on that journey, they are welcome to contact me.”

An interesting proposition, coming from a man who has truly seen the world.