Kochi tea-seller couple all set for tour Down Under, courtesy Anand Mahindra 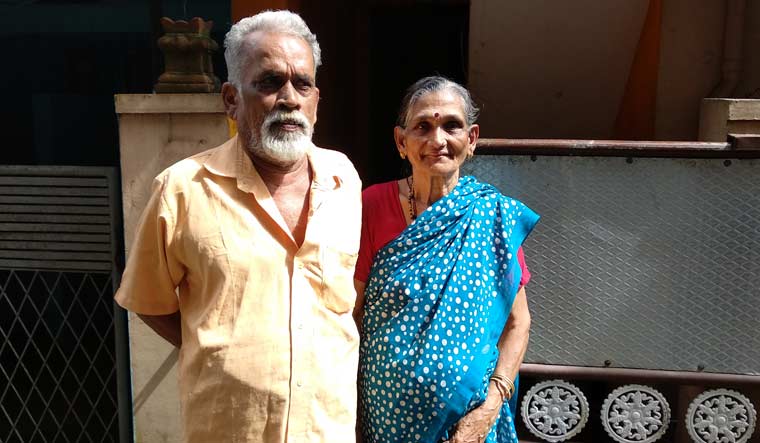 K.R. Vijayan and Mohana outside their home | Justin Paul George

On a sultry afternoon in Kochi, the man many call India's second-most famous tea-seller is hard at work at his modest home, preparing ingredients to cater to evening business. But K.R. Vijayan and his wife are far more famous for their hobby, and industry tycoon Anand Mahindra is sponsoring their latest adventure.

Vijayan and his wife, Mohana, have become known in recent years as the tea-selling couple from Kochi travelling across the globe. THE WEEK met Mohana and Vijayan at their home to learn about their upcoming visit to Australia and New Zealand. This visit is being sponsored by the chairman of the Mahindra Group. This will be the 28th trip the couple are undertaking.

Mahindra had expressed interest in sponsoring the couple after they were featured in a Youtube video by travel blogger Drew Binsky in January. The Mahindra group extended assistance to the couple in June, via their office in Kochi.

Mohana and Vijayan are scheduled to travel Down Under on October 18. When asked about the motivation for choosing the region, Vijayan said, "We visited countries in the South American continent the last time around. This time, we wish to branch out to a whole new hemisphere in Australia and New Zealand.”

Interestingly, Mohana and Vijayan had intended to visit the Scandinavian countries with the sponsorship of the Mahindra Group, but decided against it due to the bitter winter there. They intend to head to Scandinavia by April.

Vijayan spoke to THE WEEK about his upcoming travels and motivations as Mohana was cutting vegetables and a grinder chugged on, preparing dal to make vadas for their teashop.

Vijayan explained how his love for travel began from his family teashop in Chertala, a small town about 35km from Kochi. The teashop subscribed to a plethora of newspapers to cater to the different political tastes of customers. The era of the 1960s and 70s was marked by an overload of Soviet soft power—the hedge against hostile Western overtures—in Kerala. Packets and stacks of heavily subsidised Soviet literature showered down from the heavens.

For the younger ones, there were the glossy, colourful magazines—ones like Misha, Soviet Land and Sputnik—offering a peek into a brave new world that seemed just out of reach. Vijayan was not immune to that influence."We grew up reading magazines like Soviet Land, with beautiful images from Baltics and all such regions. My next biggest wish is to visit Russia and places like Japan—which were once the biggest superpowers in the world," says Vijayan.

As a child, Vijayan claimed he had an ambition to come to Kochi, the nearest major city. Vijayan arrived in Kochi 44 years ago. "I came to Kochi from Cherthala in a lungi and a shirt. Visiting Kochi was one of my greatest wishes as it was a place greatly developed at the time, with ships and trains and planes. Believe it or not, they [lungis and shirts] were the only clothes in my possession when I embarked on my first trip on December 27, 2007," said Vijayan.

This first overseas visit by Mohana and Vijayan was to the Middle East. “Till then, none of my relatives had even left Kerala,” Vijayan remembered.

'Curiosity' about cultures is what drives Mohana and Vijayan. Vijayan argues a person who visits the UK need not visit the US or Australia as all these countries are part of the Anglo-sphere and share cultural similarities. Not surprisingly, Vijayan said his visit to South America, which covered Brazil and Argentina, was memorable, given the region's unique culture.

Vijayan's sense of intellectual curiosity and civic responsibility stands out when he talks about his travels.

Ask the couple about their favourite vacation destinations, and pat comes the answer. "I loved Switzerland, with its tall mountains and all," says Mohana. "We had a great time playing around with snowballs." For Vijayan, the favourite destination is Singapore. "It has always been on my mind. There were a lot of scenic locations etched in my mind from the Indian movies I have watched."

But Vijayan was also impressed by the spotless public environs of the city state. Vijayan said India had progressed in areas like information technology, but the country remained “very backward” in public hygiene.