Magna Carta was written much like the headline above, in the style used by today's cool gals and guys for smses and WhatsApp messages. Long words were abbreviated with dashes (in place of the apostrophes), so as to condense the legal charter of 63 articles or clauses (3,600 Latin words) in one parchment.

Magna Carta was written on stretched and dried sheepskin called parchment, which was expensive. In 1215, a sheet of parchment cost as much as a ploughman's two weeks' wages. The pen was swan or goose quill and the ink made of oak galls and iron salts.

Copies of the document were sent to bishops and sheriffs across England. The exact number of copies made is unknown, but four survive―two are in the British Library in London, one in the Lincoln Cathedral and the fourth in the Salisbury Cathedral. 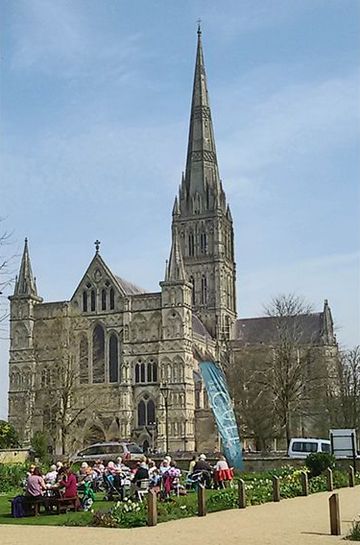 Vital link: Of four surviving copies of Magna Carta, only the one at Salisbury Cathedral is intact. It has been kept safe here since 1220 | R. Prasannan

Three of the four copies carry both sides of King John's seal. One side of the seal shows him seated on a throne, holding a sword. The text, in Latin, reads: “John, by the Grace of God, King of England, Lord of Ireland.” The reverse shows John on horseback, attired like a knight in battle. The text reads: “John, Duke of Normandy and Aquitaine, Count of Anjou.”

Trivial history says that Magna Carta was sealed, and not signed, because John was illiterate; scholars say that the seal was used because it was more difficult to forge.

The two copies in the British Library were in the possession of Sir Robert Cotton, a member of parliament and a great antiquary of the 17th century. He is said to have got one manuscript in 1629 from a London lawyer. The other copy was sent to him by Sir Edward Dering, lieutenant of the Dover Castle. This was the copy the barons sent for safekeeping to Canterbury Cathedral in 1215, when the charter was issued.

The copy in the Lincoln Cathedral is said to have been there since 1215. The bishop of Lincoln, Hugh de Welles, was one of those recorded in Magna Carta as being present when the document was sealed at Runnymede. The copy, however, was discovered only in the 19th century. The seal is missing from the Lincoln Cathedral, but three small holes at the bottom of the parchment show where it would have been attached.

Historians and townsfolk of Salisbury proudly claim that their town was a vital point of revolt against John. Some of the prominent rebel barons, particularly Longspee, the illegitimate son of Henry II and thus John's half-brother, were from Salisbury. Another prominent rebel was Elias, who personally informed the king about the barons' decision to revolt.

The town had the king's loyalists, too. Ela Longspee, wife of the celebrated William Longspee, earl of Salisbury, was one. After her husband's death, she became high sheriff of Wiltshire, and then a nun. Another John loyalist from Salisbury was Richard Poore, who was one of the executors of John's will.

“The Salisbury Magna Carta's links to key figures in the cathedral's history are remarkable,” says Seif El Rashidi, Salisbury Cathedral's Magna Carta programme manager. “The overseer of the cathedral's construction, Elias de Dereham, was the right-hand man of the archbishop of Canterbury, and present at Runnymede, negotiating on the side of the barons. Elias was responsible for the distribution of some, if not all, of the Magna Carta documents across England. It is likely that it was he who took the Salisbury charter to Old Sarum, where he became a canon.”

The one and lonely John
By R. Prasannan

Only one John has ruled England since the Norman conquest of 1066. He was so reviled that no king thereafter named his son John.

All fictional portrayals show him as a deeply flawed person, in contrast to his elder brother, Richard I, who is celebrated as Eng-land's greatest warrior-king, the Lionheart.

Richard, however, has been faulted for his disregard of kingly duties to his subjects, his bad temper and his lack of tact and diplomacy. But, the flaws pale before his battlefield glories. So much so that Walter Scott had him featured as the principal character in two of his celebrated two novels―The Talisman and Ivanhoe.

The entire Christendom saw in Richard a noble opponent to Islam's greatest caliph, Saladin. Richard and Saladin were medieval Europe's greatest foes, who parted as friends and mutual admirers.

Richard failed to take the Holy Land, and was captured by European warlords while returning to England. A huge ransom had to be paid to get him released. And, the manner in which John raised the money became a sore point with the barons.

None of this, however, cast a shadow on Richard's reputation. His equestrian statue outside the Palace of Westminster, facing the entrance to the House of Lords, is a testimony to that.

Even William Shakes-peare, who was sympathetic to all English monarchs in his historical plays (King John, Edward III, Richard II, Henry IV, Henry V, Henry VI, Richard III and Henry VIII), was not kind to John. The Bard, in fact, was inspired to write King John by another play, The Troublesome Reign of King John, by George Peele.

Probably the only account that is sympathetic to John was John Foxe's Acts and Monuments of These Latter and Perilous Dayes. Popularly known as Foxe's Book of Martyrs, it was Protestant history of the church, marked by strong anti-Catholic bias. Though John's defiance of the pope had nothing to do with Protestantism, Foxe presented it as one, and the barons as the pope's stooges. He also rekindled the medieval rumour that John was poisoned to death by monks loyal to the pope.

Robin Hood films and other historical movies have largely portrayed John as tyrannical or vain. In The Lion in Winter, John is a snivelling teenager who is despised by his mother, and manipulated by his brothers and the king of France. In The Devil's Crown, he is a villainous coward. The most recent one, Ironclad (2011), shows John rejecting Magna Carta and waging a war against his barons.

At least two of the barons turned against John because of his misdeeds. The baronial leader Robert Fitzwalter was angered by John's attempt to seduce his daughter Matilda. One of the legends says that John poisoned her. Similar was the case with Eustance de Vesci, who had fought on Richard's side in Palestine in 1191. He turned against John when he found that the monarch had tried to seduce his wife while he was away, and seized his lands.