He who reached for the stars 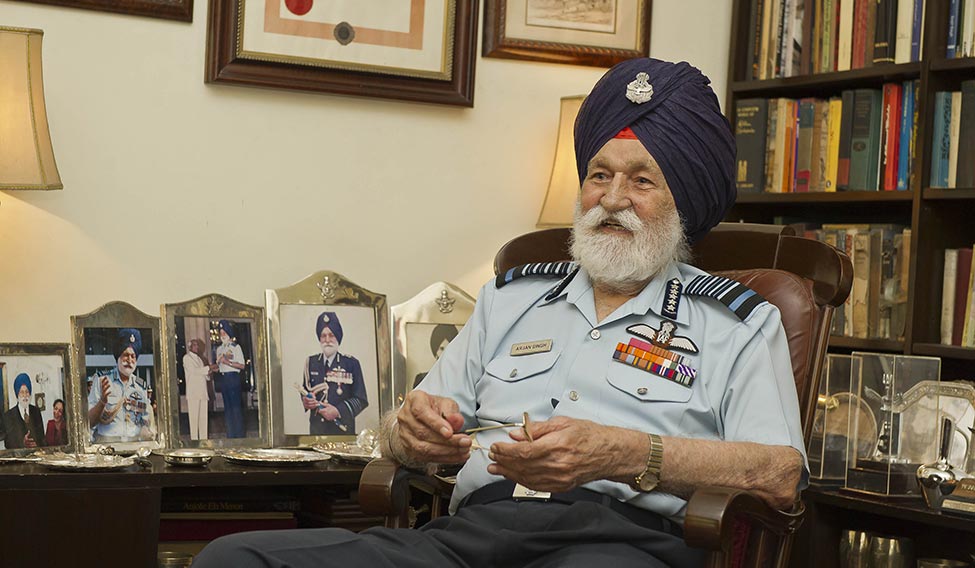 Arjan Singh’s valour and commanding power halted, blunted and pushed back the Pakistanis in the 1965 war

Early days of World War II. There was trouble along the northwest frontier, where the Pathans were revolting. The British sent the young Royal Indian Air Force’s 1 squadron, with its Audax aircraft, to quell the rebellion.

Those days, strike planes carried a gunner. Pilots and gunners worked in pairs. One such pair, a young Sikh pilot and an elderly Muslim corporal, were on a sortie on October 6, 1941, when a tribesman’s bullet hit their engine. They crashed on a riverbed. But, as he scrambled out of the plane that would explode, the pilot spotted his gunner running towards a hillock on which the hostile tribesmen were hiding. Ignoring his bleeding wounds and the bullets, he raced after the corporal, and pulled him to safety.

Arjan Singh, whom a fond defence minister Y.B. Chavan would describe as a “dancing bird” in 1965, had always been his men’s sahib. Only a year earlier, he had barely escaped being court-martialled for taking his plane on a few dangerously low loops over another corporal’s house in north Malabar. When asked to account, Arjan said he had wanted to cheer up the old fellow, who was in low spirits, by showing him his home. The squadron commander, an Englishman, was a sport. Otherwise, independent India would not have got its one and only five-star Air Force officer—Marshal of the Air Force Arjan Singh.

Things were rotten in the eastern warfront. Fortress Singapore had fallen, and the Japanese were chasing the British and the Indians, killing them in hundreds every day, through the jungles of Malaya and Burma.

When Sir Claude Auchinleck began a tour of the northwest, Arjan boldly asked the commander-in-chief if he could go east. An amused Auchinleck agreed, and the all-Indian squadron led by 25-year-old Arjan landed in Imphal in February 1944. As martial destiny would have it, the Japanese launched an offensive in the Arakan the same day.

The British airlifted an entire Indian division from the Arakan to the Kohima-Imphal line and decided to take the last stand at the gates of India. As the Japanese bombers roared over Dacca, Chittagong and Calcutta, Arjan’s squadron flew close to 5,000 sorties, wreaking havoc on Japanese lines.

By April, the British and the Indians were fighting with their backs to the wall in the Imphal valley. As the Japanese rolled down the hills for a night attack on the Indian corps headquarters, the last bastion in the east, Arjan led a 16-aircraft formation, and rained fire and brimstone on the enemy. That was Arjan’s finest hour as a young officer. In a rare gesture, the supreme Allied commander in the east, Lord Mountbatten, flew all the way from Ceylon to pin a Distinguished Flying Cross on Arjan’s chest.

Failing to break into India, the Japanese retreated. Arjan’s squadron pursued them beyond the Chindwin in Burma, inflicting heavy damage. The squadron, too, paid a heavy price: they had moved to the east with 20 brave young Indian pilots; only four returned.

India was soon free from both the Japanese threat and British rule. The day after India became free, Arjan was made group captain and the first Indian commanding officer of Ambala station.

Fast forward to the 1960s. India had survived a Kashmir war with Pakistan in 1947-48 and a morale-breaking war with China in 1962, during which the IAF was not given any role.

By the early 1960s, having joined the US-led military pacts, Ayub Khan had got the much-envied Patton tanks, Starfighters and Sabre jets from Eisenhower. In 1965, he turned them against India, which had rusting Sherman tanks, World War II vintage Mysteres, Canberras and a few puny Gnats.

The war clouds began gathering with a skirmish in the Rann of Kutch in early 1965. Army chief General J.N. Choudhury moved his tanks to the Punjab border, but the enemy struck in Chhamb on September 1.

A worried Choudhury called on Air Force chief Arjan Singh, who was one rank junior to him. The air marshal smartly saluted the general, and agreed to risk his men and planes. Together, they drove to meet defence minister Y.B. Chavan to get cabinet clearance. Chavan gave the go-ahead.

In less than half an hour, Arjan’s 26 Vampires and a few Mysteres were airborne. But Pakistani Sabres shot down four of them. The next day, he tried his Gnats. The first news was bad, but soon the Gnats started shooting down Sabres. PAF hit back by raiding Amritsar.

As India counter-attacked into Pakistani Punjab, it was full-scale war. After striking at Sargodha and destroying nearly a sixth of the air assets there, Arjan put his heavy-duty Canberras, his favourites, into battle. Cornered, PAF attacked from East Pakistan, hitting Kalaikunda in West Bengal. Arjan sent his Hunters to shoot the Sabres in the east, and sought Chavan’s permission to hit back at air bases in East Pakistan. Perhaps the Pakistanis read Chavan’s mind. They didn’t come again.

In the end, when ceasefire was declared, India had lost 65 to 70 planes, whereas Pakistan, which employed fewer planes, had lost 20. But the Pakistani offensive had been halted, blunted and pushed back, and Kashmir saved.

The war led to the treaty of Tashkent, after the signing of which prime minister Lal Bahadur Shastri died. One of the first actions of his successor, Indira Gandhi, was to promote her air chief to the four-star rank of air chief marshal. Three and a half decades later, the Vajpayee government honoured him with a fifth star.