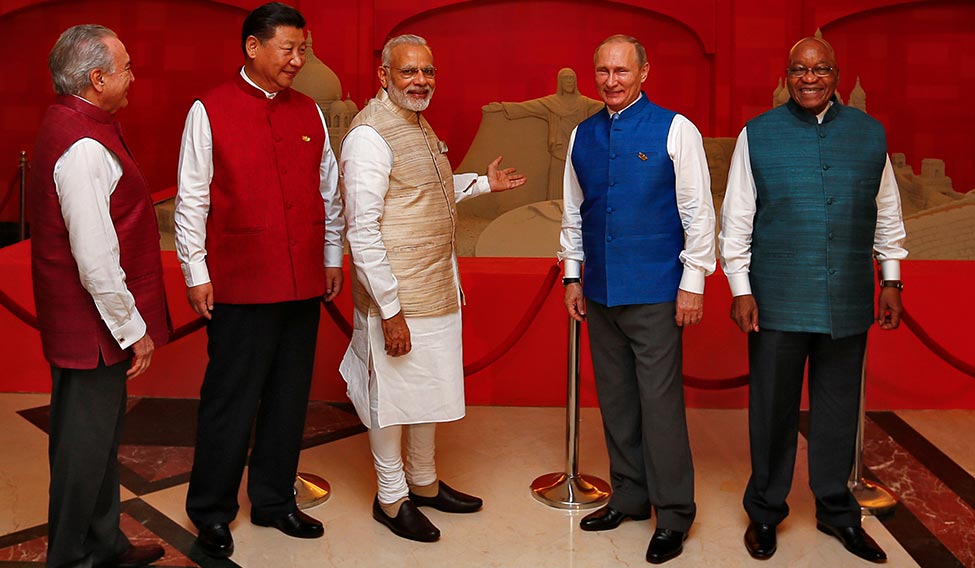 An accidental barge-in by Narendra Modi into a chat between Xi Jinping and Pushpa Kamal Dahal in Goa has come to symbolise the tensions within BRICS-BIMSTEC.

Prime Minister Dahal of Nepal, in Goa for the BIMSTEC outreach summit on October 16, was leaving a venue when he was told to wait a bit for the convoy of Brazil President Michel Temer, a BRICS guest, to pass. Dahal moved into an ante-room to join President Xi Jinping of China, another BRICS guest. The two got into a ‘pull-aside’ bilateral then and there. That was when host Modi, unaware of what was going on in the room, barged in. Dahal’s son Prakash clicked a few non-selfies of the three sitting there with sheepish smiles.

The gatecrash symbolised in a Freudian way the suspicions that one BRICS member has about another flirting with a BIMSTEC member, and also of the conflicts within BRICS. India has been jealously guarding Nepal, and eyeing every Chinese wink at Nepal as flirting. Hasn’t China been flirting! It is building roads and rail lines to get to the ‘heart’ of Nepal, causing heartburn in India. No wonder the gatecrash raised some mirth among the stiff-lipped diplomats, who were missing the flirtatious beaches of Goa.

The little accident was also indicative of the tensions between BRICS (Brazil, Russia, India, China, South Africa) members India and China over their approaches to BIMSTEC (Bay of Bengal Initiative for Multi-Sectoral Technical and Economic Cooperation). India wants to energise BIMSTEC, an informal gang-up of Bay of Bengal littoral states, as an alternative to SAARC, which is being stifled to death under Indo-Pak tensions. Many in India’s foreign office, and also in Bangladesh, have suggested that India should dump SAARC and energise BIMSTEC which has no charter, office or secretariat unlike SAARC, and no Pakistan either to spoil the fun. “It’s an issue-free relationship that we have among the members of BIMSTEC,” said secretary (east) Preeti Saran.

Though a Bay of Bengal littoral gang-up, BIMSTEC includes the landlocked Nepal and Bhutan whose sea trade is done exclusively through India’s Bay ports. The Maldives can be co-opted, and Afghanistan will be willing to join, once it begins sea trade though the India-built Chabahar port in Iran. Energising BIMSTEC would also serve India’s Act-East policy which is cheered by the US, Japan, Australia and Singapore who don’t want China to rule the eastern waters.

China has been quick to read India’s writing in the water. When Modi tried to raise the threat posed by the “mothership of terrorism” (Freudians may note the maritime imagery), Xi reminded him that South Asia’s regional problems could be sorted out within SAARC. When his payback time came, Modi told Xi that “selective approaches to terrorists... will not only be futile, but also counterproductive.” He was frustrated with China’s refusal to get Jaish-e-Mohammed founder Masood Azhar declared a terrorist.

The verbal gymnastics put paid to India’s bid to get Pakistan isolated. No member was willing to add the adjective ‘cross-border’ to ‘terrorism’ in their public statements. Indian officials claim that several used it in their chats with Modi. Otherwise, “the term didn’t figure in any references,” admitted foreign office spokesperson Vikas Swarup.

Modi’s biggest takeaway from Goa was his grand slam with Russia. India was peeved that Russia hadn’t called off its army exercise with Pakistan even after the Uri attack, and that Russia had started selling arms to Islamabad. Putin more than made up for those flirtations by signing 16 grand deals including three high-value arms deals. If one was about giving licence and the know-how to “make in India” 200 Kamov helicopters, most of which will be used for keeping the Siachen troopers battle-ready against Pakistan, another was for arming India with S-400, the world’s most advanced air-defence system that can shoot down waves of enemy planes and missiles at 400 km away. (A sweet revenge for Putin! He had long ago offered India the older version, S-300. The US had scuttled that deal by counter-offering Patriot. Unable to decide, India took neither.) A third deal was for building four frontline frigates, two in Russia and two in India. As a thrilled Modi declared that “an old friend is better than two new ones”, Putin gave another of his power-smiles. Wouldn’t he? With earnings from his energy sales falling, Putin needs big arms deals now.

At the BRICS summit, Putin focused on energy. “It is important to develop an initiative for creating [a] BRICS energy agency,” he said. Though “it didn’t come up for discussion among the sherpas,” according to Amar Sinha, India’s secretary for economic relations, it will, if Russia pushes for it in future.

BRICS members found common ground on most other issues such as combating tax evasion and restructuring the global economic order. They noted that their New Development Bank, launched a year ago and headed by India’s K.V. Kamath, was giving huge project funds, though it is yet to give the IMF and the World Bank a run for their dollars, euros and pounds.

In the end, it was like any other summit—win some, lose some. Each member came with his own concerns: Xi worried about investment blockages, Modi about terrorism, Putin about falling oil prices, Temer and South Africa’s Jacob Zuma about global problems adding to their home tensions. They all promised one another to try and address every issue, but the global economic order remains BRICS’ main concern. As to BIMSTEC, they will watch how India steers it through the choke-points in the eastern waters, where the Chinese are also waiting.