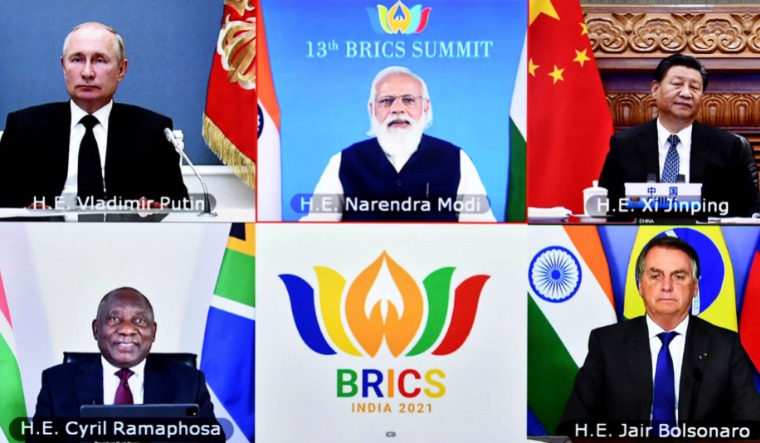 Screengrab of the BRICS summit | PIB via AP

Asserting that effective and representative multilateralism is essential for building resilience against current and future global challenges, the BRICS grouping on Thursday recommitted itself to instil "new life" in the discussions on reform of the UN Security Council and keep working to revitalise the General Assembly.

In the Delhi Declaration, adopted after a summit between leaders of the member states of Brazil, Russia, India, China and South Africa, the influential grouping pledged its resolve towards strengthening and reforming the multilateral system to make global governance more responsive and agile, effective, transparent, democratic, representative and accountable to member states.

The member states also reiterated their commitment to upholding international law, including the purposes and principles enshrined in the Charter of the United Nations.

"The pandemic has reinforced our belief that effective and representative multilateralism is essential for building resilience against current and future global challenges, promoting well-being of our people and building a sustainable future for the planet," said the declaration issued after deliberations between Prime Minister Narendra Modi, Russian President Vladimir Putin, Chinese President Xi Jinping, South African President Cyril Ramaphosa and Brazil's Jair Bolsanaro.

During discussions, there was a strong echo of need for reform of not just the UN Security Council, but other institutions of global governance system as well, Sanjay Bhattacharyya, Secretary in the Ministry of External Affairs, said at an online briefing.

The BRICS noted that despite the many successes of the UN system and its associated architecture, its continued relevance would be determined by its ability to adapt to contemporary realities and respond to the evolving and inter-connected challenges of our time.

The leaders endorsed the BRICS joint statement on strengthening and reforming the multilateral system adopted by the member states’ foreign ministers.

They agreed that the task of strengthening and reforming the multilateral system encompasses making instruments of global governance more inclusive, representative and participatory to facilitate greater and more meaningful participation of developing and least-developed countries, especially in Africa, in global decision-making processes and structures, and make it better attuned to contemporary realities.

They also called for inclusive consultation and collaboration for the benefit of all, while respecting sovereign independence, equality, mutual legitimate interests and concerns to make the multilateral organisations more responsive, effective, transparent and credible.

The leaders also stressed the importance of making multilateral organisations more democratic, objective, action-oriented and solution-oriented, so as to promote cooperation in building international relations based on the norms and principles of international law, and the spirit of mutual respect, justice, equality, mutual beneficial cooperation and realities of the contemporary world.

They highlighted the importance of strengthening capacities of individual states and international organisations to better respond to new and emerging, traditional and non-traditional challenges, including those emanating from terrorism, money laundering, cyber-realm, infodemics and fake news.

The leaders vowed to promote international and regional peace and security, social and economic development and preserve nature’s balance with people-centred international cooperation at its core.

We recommit to instil new life in the discussions on reform of the UN Security Council and continue the work to revitalise the General Assembly and strengthen the Economic and Social Council," the BRICS said.

"We recall the 2005 World Summit Outcome document and reaffirm the need for a comprehensive reform of the UN, including its Security Council, with a view to making it more representative, effective and efficient, and to increase the representation of developing countries, so that it can adequately respond to global challenges,” it said.

China and Russia reiterate the importance they attach to the status and role of Brazil, India and South Africa in international affairs and supported their aspiration to play a greater role in the UN, the declaration said.

The BRICS also reaffirmed its commitment to the implementation of the 2030 Agenda for Sustainable Development in its three dimensions—economic, social and environmental.

Stressing the importance of achieving the 2030 Agenda on Sustainable Development and its Goals, the member states reiterated their commitment to the achievement of all SDGs, including SDG-12, which identifies sustainable consumption and production patterns as a vital element of sustainable development.

The leaders also reaffirmed their commitment to the full implementation of the United Nations Framework Convention on Climate Change (UNFCCC), its Kyoto Protocol and Paris Agreement, and to the principles of the UNFCCC including ‘Common But Differentiated Responsibilities and Respective Capabilities’ in the light of different national circumstances.

The BRICS nations appreciated the New Development Bank’s substantive progress in membership expansion despite challenges emanating from the COVID-19 pandemic.

"We reiterate that the process of expansion should be gradual and balanced in terms of geographic representation in its membership as well as supportive of the NDB's goals of attaining the highest possible credit rating and institutional development," the BRICS said.

The leaders also asserted that the macroeconomic stability of the BRICS economies will play a major role in achieving global recovery and stability.