Why thousands of scientists marched onto the streets on August 9 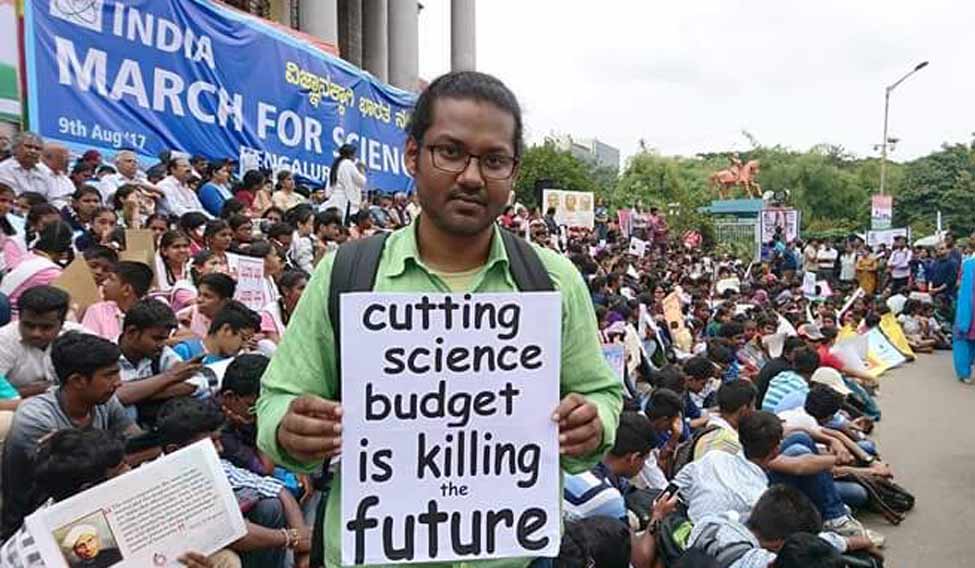 A protester at the India March for Science | File

The scientific community enlivened the spirit of the Quit India Movement

Under rainy skies on April 22, hundreds of thousands of scientists marched on to the streets of cities in the United States. In what they called 'March for Science', scientists, researchers and teachers chose to step out of their research labs and classrooms to break the silence. They were protesting US President Trump's measures to cut federal science and research budgets, and also his critical comments on climate change, often calling it a 'hoax'.

While March for Science was a global movement that saw similar protests in about 600 cities across the world, India missed it. That, however, did not mean the Indian scientific community was content with the state of science in the country. Better late than never. On August 9, thousands of scientists from India's premier research institutes and colleges took to the streets in about 42 cities in the country—the India March for Science. This time, putting their brains to creating colourful placards and catchy slogans, scientists rallied across the country to demand increased funding for scientific research and an end to unscientific practices and religious bigotry.

“This is a march for science, and has nothing to do with a particular political party. We need all governments to sit up and notice,” says K.S. Rajini, Karnataka state secretary of the Breakthrough Science Society which had sent out the initial call for India's March for Science. While to an outsider it may seem as a quick inspiration from the global march, the protests last week was just a spillover of the frustration towards decades-long apathy towards science in India.

The march pledged to carry forward the legacy of eminent scientists like U.R. Rao, Yash Pal and Puspha Mittra Bhargava. In the 70th year of Independence, the scientific community enlivened the spirit of the Quit India Movement with slogans like 'superstitions – Quit India'. “The state of science is pathetic even today,” says Kalyani.

One of the key demands of March for Science was to allocate at least 3 per cent of the Gross Domestic Product to science research in the country. According to the World Bank which analysed economies of countries from 1996 to 2014, India spends only 0.6 per cent of its budget towards research and development. This has grown to 0.8 per cent over the last two years. Nothing fancy, though, considering our neighbour China has allocated over 2 per cent of its GDP towards R&D. 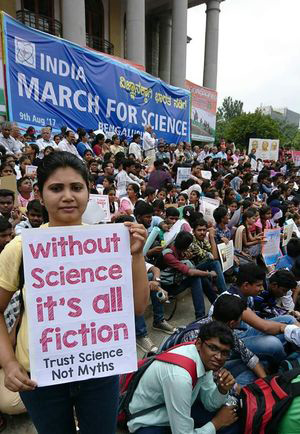 In June this year, Girish Sahni, director of the Council of Scientific and Industrial Research (CSIR), admitted that they were feeling a budgetary pinch. According to reports, Sahni, in a mail wrote that after covering salaries, pensions and perks of employees “we will be left with no funds to support new research projects”. A sad reality for one of India's premier scientific institutions. Ironically, researchers of Institute of Genomics and Integrative Biology, a lab under the CSIR had received a gag order against participating in the March for Science.

While Indian-origin scientists in the United States and the West are engaged in path-breaking research, those back home have been left behind in the race. “Increased funding is a must to tackle brain drain, too,” adds Kalyani. She also reminds us of degree courses in basic science subjects shutting down in many colleges due to lack of takers. “Students have no hope of a future with these streams,” says Kalyani who is retired Head of Department of Biology, Presidency College, Bengaluru.

In June, the AYUSH ministry became the butt of all jokes with a prescription for pregnant women—say no to meat, sex and bad company to have a healthy baby. Despite vain attempts to clear the air about the controversial suggestion, this signals at just the tip of the ice berg. It is unfortunate when those with power itself spread such unscientific notions. The scientific community hopes for governments to use science to take decisions, and declare policies for a better future.

In addition to funding, the organisers of March for Science have also called for an end to 'propagation of unscientific, obscurantist ideas and religious intolerance'. With statements such as planes were developed during Vedic ages and that it could fly between planets, being presented at the annual Indian Science Congress, this event, too, has lost its significance. Or rather, it has become yet another joke.

The March for Science also urged that the education system only impart ideas backed by scientific evidence. Sample this: in November 2014, a class V science text book taught students that first test tube babies were created in India 7,500 years ago and the first such baby was sage Dronacharya! “We are not against mythology or religion, but let us not mix it with science and spread irrational ideas,” adds Kalyani. Science must be given priority, right from primary stages of education, she says.

The overwhelming response shown by students from colleges and research institutions to the march on August 9 is proof of the general sentiment about these issues. High time governments take note and address the matter. As Kalyani rightly puts it: “If there is no focus on science, Make in India is a hollow slogan.”

Your form could not be submitted.
This browser settings will not support to add bookmarks programmatically. Please press Ctrl+D or change settings to bookmark this page.
Topics : #Science | #budget