The government has been in a silent fiscal crisis: Rathin Roy 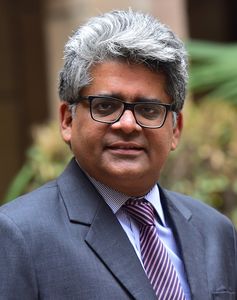 Rathin Roy is a senior visiting fellow at the Centre for Policy Research.  He is also the managing director (Research and Policy) at the Overseas Development Institute (ODI). His policy interests and research are mainly focused on fiscal and macroeconomic issues pertinent to human development in developing and emerging economies. Roy was also formerly the director and CEO of the National Institute of Public Finance and Policy (NIPFP) in New Delhi and worked as an economic diplomat and policy advisor at the United Nations Development Programme (UNDP), with postings in London, New York, Kathmandu and Brasilia. He served as an economic advisor with the Thirteenth Finance Commission, in the rank of joint secretary to the Government of India. In an exclusive interaction with THE WEEK, Roy talks about the urgent need for corrective measures to speed up growth in the Indian economy  and why the government needs to have credible plans to help in the economic growth of the country.

What do you think of the Union Budget? Was it as per your expectations?

I have never had any expectations from a budget for more than a decade now because there is no medium term plan to which the governments have been operating the public finances. If you do not have a medium term plan—and that has only gotten worse now—how can one have expectations. Nobody from the government will be able to answer questions such as ‘what would be the share of agriculture in GDP in 2026?’ ‘what will be the total fiscal deficit then and what will be the total tax GDP ratio?, ‘what will be the composition of public spending?’ etc. So, if you are not working towards a medium term blue print, then every year budgets are essentially jugaad plus. This year is also not very different from the earlier budgets.

For the last one decade, the government of India has been operating on a short term auto pilot, and there is no strategic vision going forward. Besides, there are targets and statements set, but there is no credible plan to achieve them. In these disappointing state of affairs, one must therefore cease to have expectations from a document such as the budget.

Where has the government gone wrong on the economy front?

For the last few years, the central government has been in a silent fiscal crisis and it is almost like a silent heart attack. This is because since 2017, the government has not been able to mobilise the resources it said it would, year after year. Basically, the government of India, for a long time, has aspired to achieve a tax GDP ratio of 8 per cent. In the last few years as it was not able to meet that target, it began to aspire towards large disinvestment targets. In the previous year, they aspired to disinvest Rs 1,75,000 crore.  They felt short of that by Rs 10,000 crore.

How then were they able to meet their tax revenue targets which they claim?

They were able to exceed and meet their tax revenue target because they lowered their ambition so much last year that they were able to achieve this very modest target which is way below the 8 per cent that they had aspired for. When the government talks about good tax performance, let us not forget that two things happened—one is that the majority of tax revenues they have collected from the GST have not come in from domestic sources but from imports. I do not think that it is a good thing. Are we saying that we are sacrificing our current account deficit to make sure that we have tax health. Profit tax buoyancy is, by no means, as high as the growth in profits. Just take a look at what has happened at the stock market till the last week—it has boomed during the pandemic but have corporate taxes boomed in equal measure? No, absolutely not. Have income taxes boomed in equal measure—absolutely not. So these are not real tax gains.

A combination of incompetence on the resource mobilisation side and inability to do anything, except cut expenditure, has been a hallmark of Indian government's budget over the last few years. The only exception is that from next year, the disinvestment and the tax targets are very modest. I want to praise the government on this count, that the government has recognised its incompetence on its own. It is a very sad state of affairs.

What can be immediately done to improve the situation?

We really need to do something about it. I wish the government should have done what it said on disinvestment. It is like telling a school boy what you could have done better in your exams. You were targeted to achieve a certain grade and you failed to achieve it by not just one per cent or ten per cent but by 200 per cent. You have collected only one third of the disinvestment receipts that you would collect. Imagine a situation when the government would have met its disinvestment target and had Rs 1,00,000 crore. Then we would not have a smaller budget, then we would have genuinely expansionary spending.

The government is saying that it has increased capital expenditure. Is it the right move?

What is your take on subsidies by the government?

If one compares to the FY 2019  subsidies have gone up and not down. They may have gone down when compared to last year. But if you take the medium term, they would be higher this year than they were before the pandemic. To my surprise, post pandemic there has been a large cut in NAREGA. My question to the government is why did seven million households last year not get work from NAREGA when they asked for it. So, I feel that the quality of revenue expenditure has suffered.

The government has stressed on the growth of healthcare and infrastructure in the budget. How will it help the economy?

Paradoxically, the government's total expenditure on healthcare as a percentage of GDP  is lower than what it was before the pandemic. I agree that the vaccination demand has gone down, and the Covid cases are abating, but that does not mean that commitment to build a better health infrastructure was a lie to be given to the public and forgotten the moment Covid is over. I am concerned that the cuts in revenue expenditure affect the lives of people disproportionately. Meanwhile, bad things in revenue expenditure that could have been cut have not been cut. That is how the capital expenditure increase has been achieved. I would like to add that this is a pro-rich capital expenditure expansion. The expansion is supposed to build highways, to build and upgrade railway networks. I am curious to know as to what proportion of this capital expenditure is going to happen in the poorer parts of India. The finance minister has not even mentioned cold chain in the budget. I have not seen anything in the budget that addresses the rural sector. All I am seeing is building infrastructure such as roads, metros, and highways. The demand and utilisation for them will be higher in the richer parts of the country unless you specifically target the infrastructure spending to the poorer parts of the country. There is nothing for the urban poor in this budget, except for a commitment to build low cost housing which I welcome. The budget also does not have an eye on those who suffered in the pandemic.

What could have the budget done for the banking segment?

The budget could not have done much for the banking segment. However, the government owns banks. If the government has taken a policy decision to privatise the banks, then they should do as little as possible for the banks other than recapitalise  the public sector banks. The government should stick to its decision to privatise the banking sector. It is inappropriate at this juncture to have such a large banking system in the public domain in which the tax payers have bailed them out multiple times. It has got to stop. For all this, we need a competent finance ministry to execute the privatisation of banks. At the moment, I am seeing none of that competence in the ministry and that is why the targets are so modest and the state of affairs very unsatisfactory. Hence, more money should not be poured over a publicly owned banking system and subsidising people who default on their loans at the taxpayers expense.

Your views on the MSME segment and jobs. What can be done in this regard?

It is not the government's business to create jobs. Jobs are created by increasing activities. The total MSME sector in this country has shrunk and we have lost jobs there. Jobs have also not been created in the other sectors of the economy yet, and therefore we need to basically raise the magnitude, scope and quality of economic activities so that jobs are created. It would involve a rapid increase in GDP growth particularly in manufacturing but also to restore GDP growth to where it was before the pandemic. My estimate is that we need to just get back to where we were before the pandemic. After all, if the pandemic had not happened, we would have grown at the average of the last five years and that is a very modest average. In the absence of a pandemic, the Indian economy would have grown around 5 per cent a year for three years. It has not happened. Effectively, we are now back to zero. To get back to FY 2019-2020 levels, we will now for the next five years have to grow at 7.5 per cent. I feel that the government has no plan and strategy to grow at 7.5 per cent. Therefore, I see nothing in the budget that shows me any kind of link between the aspiration of that 7.5 per cent growth which is ultimately necessary but not enough to create jobs.