All you need to know about Varaha-1, a seabed mining machine India is developing 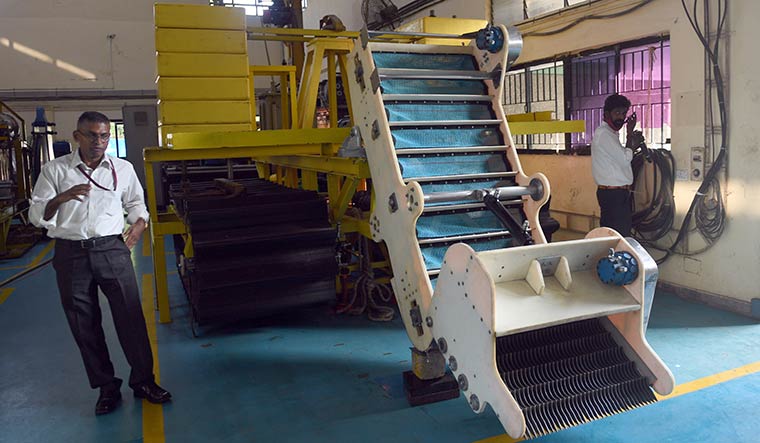 It looks like a cross between a battle tank, a road construction machine and an animal, with its caterpillar tread, an elephantine trunk to pick up nodules, an assortment of plates and teeth to sort and grind them, and another contraption to pump up this harvest. In the looks department, it is certainly not in the league of a Formula One race car. Cdr Gopakumar N., however, is mighty proud of his strange-looking vehicle Varaha-1—named after the boar avatar of Vishnu.

Designed and developed by a small but inspired team of scientists at the National Institute of Ocean Technology (NIOT), Varaha-1 is a self-propelled seabed mining machine for the collection of polymetallic nodules (PMN). Unlike Matsya 6000, this one will not have any passengers. Its work is restricted to the collection and pumping of nodules, steadily and continuously over prolonged durations, in the deep-sea conditions up to 6,000m.

Upheavals on the ocean surface have minimal impact at depths of 3,000m and beyond, but there are other upheavals in the seabed. Hydrothermal vent activity at the tectonic plate boundaries and the back-arc basins form mineral-laden subsea geysers. Formed over millions of years, these accrete into subsea mounts and mineral deposits, providing polymetallic sulphides (PMS). Similarly, small rock-like nodules are formed over millions of years on the abyssal plains of the oceans. Mineral precipitation from the water accretes around the bones, shark teeth or rock fossils that descend to the seabed. Over millions of years, these become PMN—clods varying in size from a small grape to a large potato—rich in ferromanganese and the three critical metals of nickel, cobalt and copper. This is the treasure that Varaha-1 is preparing to harvest.

Net-zero is the new mantra. Experts forecast a spurt in electric vehicles (EVs), replacing fossil-fuel driven vehicles, over the next two decades. The known supplies of nickel, copper, and particularly, cobalt on land—key components in the batteries of EVs—are not adequate to meet these growing needs. Hence, the exploration for alternate supply sources. While space scientists are training their eyes on asteroid mining, oceanologists are looking at sustainable ways to commercially mine minerals from the ocean. PMNs are that manna, if only they can be brought up to the surface at commercially viable rates. Developing technology for deep-sea mining is an important project under the government’s deep ocean mission.

The open seas do not belong to any one country; their use is governed by several international bodies. Several countries and large business consortiums have staked prospecting areas of the ocean bed from the International Seabed Authority (ISA). Most of them are concentrated in the Pacific Ocean, in an area called the Clarion-Clipperton Zone, which has PMN in mineable proportions and is rich in cobalt and nickel. India was accepted as a pioneer investor by the ISA in August 1987 and was granted an area of 75,000sqkm in March 2002 in the Central Indian Ocean. Thus started India’s journey in survey and exploration, and the technology development efforts for mining of these nodules from depths up to 6000m. While the original allocation by the contract with the ISA was for 15 years, it was extended for five years in 2017 and only recently, for another five years.

The Union ministry of earth sciences estimates the PMN resource potential in this area is about 380 million metric tonnes (MMT), containing 4.7MMT of nickel, 4.29MMT of copper, 0.55MMT of cobalt and 92.59MMT of manganese.

The deep-sea mining team at NIOT, under Gopakumar, a former marine engineer in the Indian Navy, is developing an integrated mining system. This can pick up these coveted nodules from the ocean bed, crush them in-situ to smaller pieces, and then pump the slurry of crushed nodules and seawater through a flexible hose, first to an intermediate pump station, suspended in the water column, close to the seabed miner. From this intermediate pump station, the slurry would be transferred vertically to the ship through a riser system of flexible hoses.

Varaha-1 has already got wet, with a dive to a depth of 5,270m in February. With power and control from the surface, through an umbilical cable of over 6500m, Varaha-1 “crawled” a distance of 120m, spending over two and a half hours at these less-explored depths. The distance covered may seem modest, but it is the deepest that any vehicle has ever crawled underwater. By early next year, the team plans to conduct trials to demonstrate the miner’s capability in collecting, crushing and transferring the nodules up to the intermediate pump station level—just above the mining machine. The eventual plan is to successfully demonstrate nodule collection from the seabed and transfer them to the surface ship over a water column height up to 6000m by 2025-2026. The current deep-sea mining project is a technology demonstrator at pilot scales of nodule collections and vertical transfer. Converting this technology to a viable commercial mining programme is still in the future.

While large consortiums from the United States, Europe and Japan have explored ocean beds for mineral wealth over several decades—and a few have undertaken pilot mining trials in the Pacific Ocean, particularly from 1974 to 1978—no one has come up with a technology for commercial mining, yet. The interest in deep-sea mining waned with the fall in metal prices. Only countries like India, China, South Korea, Japan and Germany had kept the interest in deep-sea mining alive.

Gopakumar brings out a basket of nodules collected from the depths of the ocean. I pick one up, it is the size of a walnut, dark grey in colour and surprisingly light. As a nodule, it is a fossil—a record of the earth’s past. Mined and crushed, it is a resource that will power the earth into the future.