The snake was named after him, owing to his contribution to the discovery 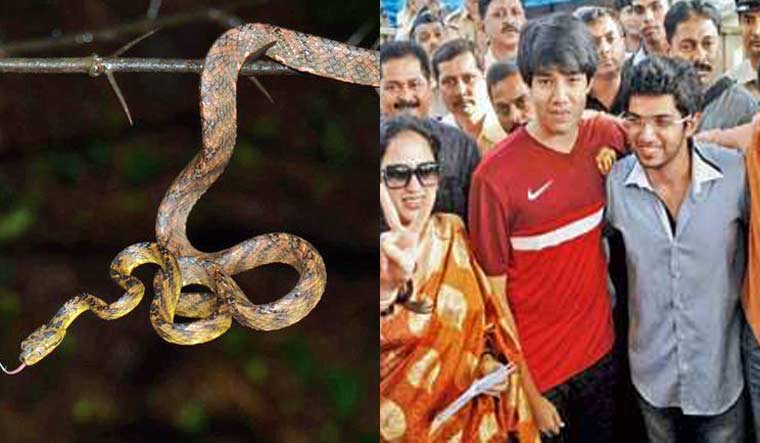 A new species of snakes has been discovered in the Western Ghats in Maharashtra and named after Tejas Thackeray, the younger son of Shiv Sena chief Uddhav Thackeray, for his contribution to the find.

The species falls in the category commonly called as cat snakes and belong to the genusBoiga, director of the Pune-based Foundation for Biodiversity Conservation Varad Giri told PTI on Thursday.

A research paper describing the new species was published in the journal of the Bombay Natural History Society (BNHS) on Thursday, he said.

"Snakes belonging to this genus are distributed across India, but a few species are endemic to the Western Ghats," he said.

Tejas is the younger son of Uddhav Thackeray.

"Tejas Thackeray spotted this species for the first time in 2015 and studied its behavior in detail. He presented these details to the Foundation for Biodiversity Conservation and helped us with further research," Giri said.

"This new snake is arboreal, mostly seen close to forest streams, and isactive during the night. It is non-venomous and is known to grow up to three feet in length. It feeds on eggs of Humayun's night frog (Nyctibatrachushumayuni). This behavior was never reported in cat snakes from the Western Ghats earlier," Giri said.

The new species was found in the Koyna region of Satara district in western Maharashtra. "There are still surprises hidden in the Western Ghats," Giri said.

"Boiga thackerayi sp. nov -Thackeray's cat snake, a new species with Tiger like stripes on its body from the Sahyadri tiger reserve in Maharashtra!"

"My brother, Tejas discovered this beautiful species of the snake in the Western Ghats! Hence the name," he added in another tweet.

"The first Boiga to be described from the western ghats in 125 years! Known to feed exclusively on tree frogs and their eggs," Aditya added.