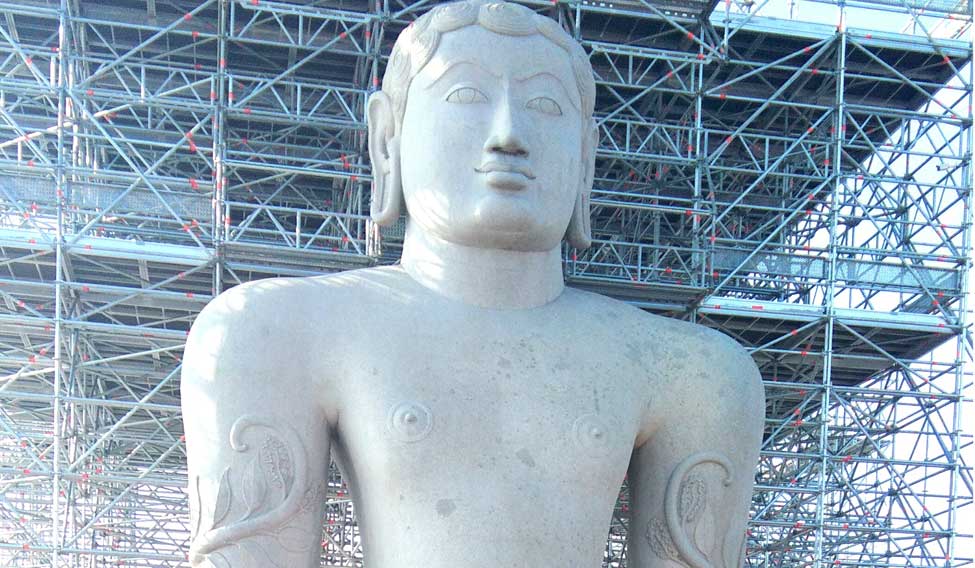 He stands tall atop the Vindhyagiri hills in Shravanabelagola in Karnataka.

An epitome of supreme sacrifice and total renunciation, Bahubali, the son of the first Jain Tirthankar, Adinath (Vrishabanath), has been immortalised as Gommateshwara, the world's tallest monolithic statue in Shravanabelagola.

This February, the temple town in Hassan district, will witness a new chapter in history when the 'Bahubali Mahamasthakabhisheka', the head-anointing ceremony of the 57ft-tall granite statue, will take place for the 88th time.

The ceremony which is performed once in 12 years, draws huge crowds from across the world and this time, it is estimated that 1 crore people may visit the town over the next six months. Monks and nuns from across India have already arrived in the temple town, while tourists are trickling in too.

The first head-anointing ceremony was carried out on March 13, 981 AD by Chamundaraya, the commander and prime minister to King Rachamalla of the Ganga dynasty, who commissioned the statue of Bahubali.

Till date, the ceremony has remained an unbroken tradition, under the meticulous supervision of the pontiffs of the Bhattaraka tradition over the centuries.

“The Masthakabhisheka tradition continued under royal patronage of the Gangas, followed by Hoysalas, the Vijayanagar Empire, Mysore Wadiyars and also the British. Post Independence, the ritual was performed in 1953, 1967, 1981, 1993 and 2006,” explains Karmayogi Sri Charukeerthi Bhattaraka Swamiji, pontiff of the Shravanabelagola Mutt, who will be supervising the event for the fourth time.

“The erstwhile kings had donated 35 villages in the vicinity to raise funds for Masthakabhisheka. But following the Land Reforms Act (tenancy law), the lands became the property of the tenants. So, the subsequent governments and the devotees have been funding the event,” he added.

Bahubali, a king and a warrior who refused to surrender before his elder brother, Bharata, chose to fight without arms to avert bloodshed. But after he won all three combats, he was overcome by remorse and renounced the world.

Bahubali is not a forgotten hero, but is a constant inspiration to a world battling conflicts and wars. His message of supreme sacrifice, renunciation, non-violence and peace are relevant to this day, says the pontiff.

“Bahubali was the first to advocate and practice disarmament in the world. He was a great king and a warrior. Today, the United Nations is advocating disarmament as it is the only hope for mankind. There is a need to lay down arms and come to the negotiation table to amicably settle conflicts, without bloodshed.”

“Ahimsa or non-violence is the path to happiness and peace. Bahubali bhagwan has shown us that compassion and sacrifice are virtues that can help build better understanding among human beings,” says Bhattaraka Swamiji, adding that the religious extravaganza is a form of expressing devotion to the great soul and spreading his message with fanfare.

“This is also an avenue for social transformation as the funds raised during the festivities are used for social projects like building schools, colleges and hospitals,” adds the pontiff, who was honoured with title of Karmayogi by then prime minister Indira Gandhi in 1981. 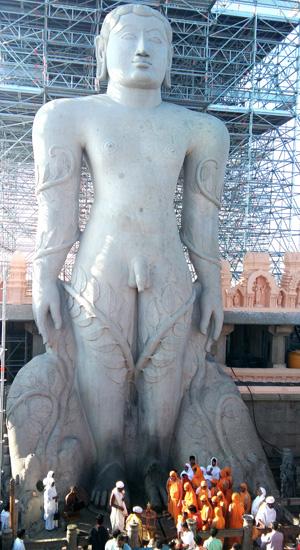 Devotees at the Bahubali statue in Shravanabelagola | Prathima Nandakumar

This time, the Karnataka government is spending in excess of Rs 175 crore to build temporary and permanent infrastructure in the temple town. The Centre has come forward to build the fourth stairway to the hills and has extended rail connectivity from Bengaluru (in addition to trains connecting to Mysuru), which ensures 23 trains pass through Shravanabelagola daily.

“In 2006, the Centre had granted Rs 90 crore and the state had spent Rs 30 crore. But this time, the Centre has asked the state to fund the event,” said Hassan District In-charge Minister A. Manju.

Around 12 self-sufficient townships are being built on 525 acres of farmland (after paying crop compensation to the farmers) to host the monk, nuns, devotees, tourists, government officials, media and security personnel and volunteers.

The town can accommodate 30,000 people at a time. Each township will have large common dining halls, hospital, fire and emergency units, police station, toilets and other facilities for the residents.

“The government will charge Rs 1,800 per unit per day for the accommodation. Dry waste will be crushed and removed, while wet waste will be converted into manure. A modern STP is also coming up,” Manju revealed.

“Apart from deployment of 4,000 police and home guards personnel, a video wall will stream all CCTV cameras live for better security. The roads have been asphalted and 200 designated buses and 85 minibuses will be introduced as all other vehicular movement will be banned to decongest the town,” added Manju.

A viewer platform is being built around the statue to accommodate 5,000 guests. However, the spectacle can be witnessed by devotees from Chandragiri hills opposite the main shrine. The event will also be live-streamed via an app.

The 20-day festivities are expected to attract 35-40 lakh people from across the world. The head-anointing ceremony will be held between February 17 and 25, when devotees will climb the specially designed high-rise scaffolding (built using German technology) to give Lord Bahubali the celestial bath.

On the first day, 108 specially decorated Kalashas will be used for the ritual and the highest bidder will have the privilege of performing the ceremony of pouring water collected from sacred rivers on the deity The following days, 1,008 Kalashas will be used to pour consecrated water from atop the head of the statue, which is then bathed with milk, sugarcane juice and saffron paste and sprinkled with powders of sandalwood, turmeric and vermilion. The anointing ceremony will be held every Sunday till August.

The district administration is also promoting aerial tourism offering a 10-minute joyride at Rs 2,300 per person. The tourism department is promoting Karnataka’s Jain circuit: Moodbidri, Venur, Karkala and Dharmasthala in Dakshina Kannada, besides promoting Belur and Halebeed in Hassan district for their ancient monuments.

A confluence of faith and history

The monolithic statue was installed by Chamundaraya, the commander of King Rachamalla of the Ganga dynasty, to fulfil the wish of ailing mother, Kaladevi.

According to legend, Chamundaraya and his mother had set out on a tour to Podanpur to see Lord Bahubali's statue in north India, but halted at Shravanabelagola. In his sleep, Chamundaraya saw a vivid dream of a magnificent image of Bahubali on the hills. As per the orders of his guru, Nemichandra Siddhantha Chakravarthy, Chamundaraya shot an arrow towards the Vindhyagiri hills and decided to carve out the statue where the arrow had landed.

If Bahubali's statue on Vindhyagiri has transformed the temple town as the holiest of Jain pilgrim centres, the adjoining Chandragiri is the link to the history of Jainism in Karnataka.

Chikkabetta or Chandragiri hills has inscriptions depicting the arrival of sage Bhadrabahu and his disciple, King Chandragupta Maurya, in the 3rd century when northern India was reeling under a 12-year-long drought.

It was on this hill that Chandragupta and his guru spent their last days till they attained samadhi in the caves.

Chandragiri is known as Samadhi Betta as many Jain monks continue to opt for Iccha Marana (death by one's wish) at this holy site. Inscriptions mention the arrival of both Bhadrabahu and Chandragupta and also the temple built by Samrat Ashok in honour of his grandfather.

Your form could not be submitted.
This browser settings will not support to add bookmarks programmatically. Please press Ctrl+D or change settings to bookmark this page.
Topics : #Jainism | #religion | #Karnataka