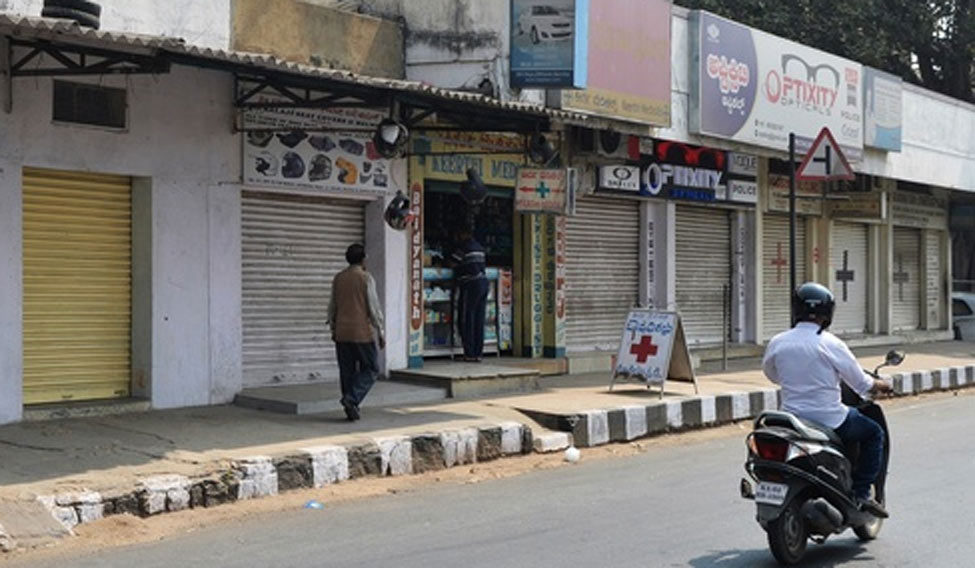 A deserted street in Bengaluru during the bandh | AFP

The Mahadayi agitation in Karnataka reached its peak on Thursday, after pro-Kannada groups called for a Karnataka bandh, and found tacit support from the state government, as state-run buses went off the road, even though private cabs, autorickshaws and other buses continued to ply as usual.

However, the bandh evoked a mixed response as malls, schools and colleges chose to remain closed, while hospitals and some business establishments were open.

While the trigger for the bandh seems to be the deadlock over the Mahadayi issue, the timing of the bandh—coinciding with the last day of BJP's 75-day Parivarthana Rally—smacks of politics.

Even as the agitators reiterated that the bandh call was given to demand Prime Minister Narendra Modi's intervention, the call for a second bandh in Bengaluru on February 4, which also coincides with a rally by Modi in Bengaluru, has triggered a war of words between the ruling Congress and the BJP. The saffron party suspects the bandh is a Congress ploy to disrupt the BJP rally.

Chief Minister Siddaramaiah rubbished the BJP's claim, stating the the bandh was not state sponsored as alleged by the BJP.

However, Siddaramaiah charged that the BJP was worried about poor turnout at the rally in Mysuru and was making the bandh an excuse. "BJP leaders were embarrassed by the empty chairs during the previous rally attended by Shah in Bengaluru," mocked the CM, adding that he was not petty minded to obstruct the BJP's rally.

BJP leader B.S. Yeddyurappa, in a counter, has threatened to hold similar bandhs during AICC president Rahul Gandhi's rallies in Karnataka in the coming days.

Meanwhile, the Mahadayi water-sharing dispute between Karnataka and Goa has remained a hard nut to crack for multiple governments; it has been a rallying point for all the political parties during elections.

When the Mahadayi River Water Disputes Tribunal in Delhi begins its hearing on February 6, it will expose both the national parties in Karnataka as neither has pursued the matter even though the Mahadayi agitation by farmers in north Karnataka region entered the 900th day on January 1.

The all-party delegation and efforts to resolve the issue out of court have yielded little result, but provided fodder for the political blame game.

If the Karnataka government has failed to represent it's case before the Tribunal, the opposition BJP swung into action only in an election year, and BJP state president Yeddyurappa intervened and managed to extract only an assurance from Goa Chief Minister Manohar Parrikar last month.

However, the Congress has raised questions over the legal viability of Parrikar's letter before the Tribunal. It is no secret that Parrikar heads a coalition government in Goa and is in no position to initiate talks with Karnataka without taking the BJP's allies into confidence.

Incidentally, the ruling Congress too has been shying away from negotiations as the party has been backing Goa since May 2007. Then Congress president Sonia Gandhi, while addressing an election rally at Margao, had assured Goans that her party would not allow diversion of the Mahadayi waters.

Chief Minister Siddaramaiah, who led an all-party delegation in 2015, has been insisting on Prime Minister Narendra Modi's intervention to end the deadlock, which people dub as a delaying tactic.

The political blame game, and unwillingness of the political parties to rise above electoral considerations, has held the north Karnataka region to ransom.

Your form could not be submitted.
This browser settings will not support to add bookmarks programmatically. Please press Ctrl+D or change settings to bookmark this page.
Topics : #Karnataka | #Siddaramaiah | #Amit Shah | #Karnataka election 2018