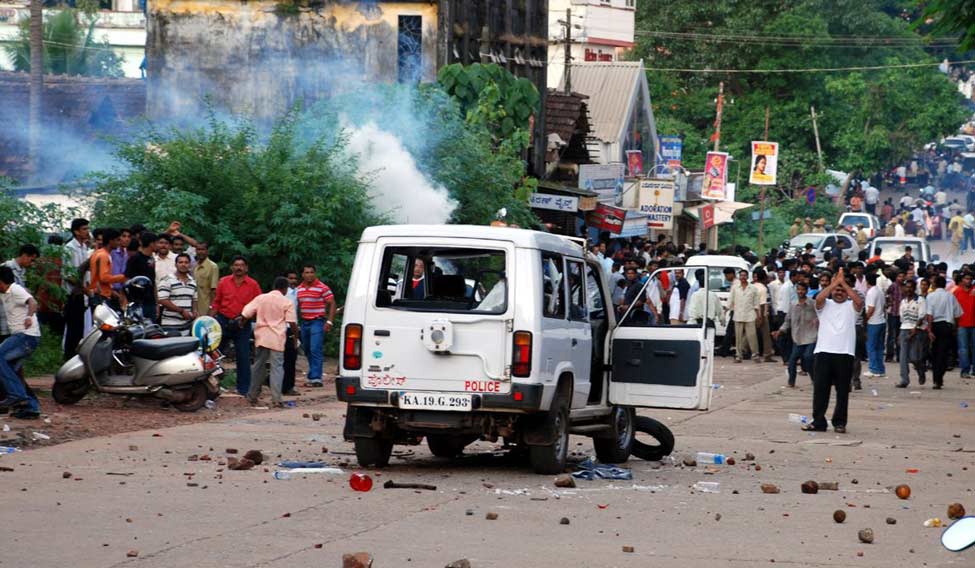 Deepak and Basheer would have effortlessly struck a conversation in either Tulu or Beary if they had casually met on the streets of Dakshina Kannada. For, they represent the common man and the larger character of coastal district as secular and peace-loving. But both men are now dead and victims to the brewing communal hatred along coastal Karnataka.

Deepak Rao (28), a mobile currency distributor, was hacked to death in broad daylight by four persons at Katipalla near Surathkal around 1.30 pm on January 3. Deepak, who was on his way home for lunch, was waylaid by the youths armed with lethal weapons. The accused—Naushad Ullanje of Mulki, Rizwan, Pinky Nawaz and Mohammad Irshan—were arrested by the police, but after a long car-chase.

The same day, Abdul Basheer (47), an eatery owner at Kottara Chowki in Mangaluru was brutally attacked allegedly by right-wing activists. Basheer died in a hospital four days after the attack. The police arrested four accused—Srijith P.K., Kishan Poojary and siblings Dhanush Kotyan and Sandesh Kotyan—who allegedly claimed they had picked on Basheer as a random target for their retaliatory attack to avenge Deepak Rao's murder.

The new year began with a dark reminder that it will not just be the political activists who will be felled but the innocents. The most-literate district in Karnataka is simmering in the heat of divisive politics— polarisation by the Sangh Parivar and spawning of retaliatory organisations like the Popular Front of India are flaring up communal passions. The civil society fears the violence could be worse as the communal clashes and death have a definite pattern and peak around elections, even as both the Congress and the the BJP play out the “Hindutva” politics.

The blamegame has just begun with political parties seizing the opportunity to consolidate their Hindu or Muslim votebanks. Chief Minister Siddaramaiah announced a compensation of Rs 10 lakh each. While the Congress accused the BJP of fanning communal passions, the BJP ridiculed the ruling party for being “anti-Hindu” and as favouring the radical Muslim groups like SDPUI and PFI. But the families of Deepak and Basheer will continue to battle for a livelihood now even as they fight the huge vacuum in their lives left behind by their loved ones.

Little known facts puzzle you. If Basheer lived in a predominantly Hindu area, Deepak, though a Bajrang Dal member, worked for a Muslim family-run mobile currency business for the last seven years. He was fluent in Beary and was close to his boss Abdul Majeed's family and sometimes dropped his children to school. Basheer's Hindu friends remember him as a gentleman. Deepak's distraught mother wants the culprits punished, while Basheer's wife and sons say they are not angry but at a sense of loss.

Lost in the cacophony of the political rhetoric is the voice of the civil society, which is hoping to take charge. The civil society blames the failure in intelligence and the complacency of the police force owing to their ideological affiliations for the mindless violence. The day Rao was murdered, passions were soaring high and it was only prudent for the police to impose prohibitory orders in the district. But that could not stop the Hindu activists from taking out a cremation rally. However, in a major relief, a possible violence was averted on last Sunday after Basheer passed away in a hospital. Some citizens immediately intervened and held a meeting with the victim's family, the police and the community leaders and appealed for peace and ensured a quiet burial too.

“The killings might or might not be political murders. But there is a tendency to take political mileage out of it. It is important to realise it is a personal tragedy and death should not become a celebration for the sake of politics. After Deepak's death, there was rapid mobilisation and politicisation. Luckily, in Basheer's case, his son appealed for peace reminding all that his father would have loved it that way. The family conducted itself with dignity and the situation could not be exploited anybody,” says Vidya Dinker, who also calls out the hypocrisy of the political parties over holding peace rallies.

“Both BJP and SDPI are looking at such deaths as an opportunity to seek sympathy and garner votes. It is getting ugly. If these two are communally polarising the people, the Congress is practising soft Hindutva by taking a higher moral ground. Aren't they supposed to be policing better and preventing such incidents by instilling the fear of law?,” asks Dinker.

The district turns volatile over minor incidents, too, as in the case of the Kadri temple issue. The locals who complained against indiscriminate use of loudspeakers at the neighbourhood temple by Ayyappa devotees turned political with religious groups turning violent and the police soft-pedaling the issue. Citizens, who are working closely with the police department, now wonder whether the city can have  a standard operating procedure to ban or limit use of loudspeakers across all places of worship.

The communal divide is widening even in schools and colleges as students fear mingling with friends from other religions. The “immoral policing” is at its peak, rue social workers, who say it is both the pro-Hindu and pro-Muslim groups who are on the prowl.

In a recent incident at the Manasa Water Park in Pilikula, a group of youngsters from different religions were manhandled and shamed by fringe elements. What was shocking was the activists stormed a public place escorted by the police and terrorised minors. “Instead of arresting the fringe groups who violated the law by intimidating the minor students, the police was apprehending the youngsters who had violated no law,” says Dinker.

In the neighbouring district, a girl (Dhanyashree) was driven to commit suicide after pro-Hindu activists hounded and ran a campaign against her on social media for “befriending” boys belonging to other religions. The moral code for girls to “keep away” from boys from “outside their religion” is commonplace. Incidentally, the “community moral policing” has also stretched too far. A pontiff in Bantwal's Vajaradehi Math has formed a special taskforce to “fight” love-jihad and deputed a team of women who go door-to-door to counsel parents and families of school going and college girls. Strangely, this unwarranted policing by fringe groups seems to have the tacit support of the girls' parents, too, as they either fear their family will earn disrepute if they resist the groups or believe that their children will be safe from perils of “love jihad” by vigilantism, rue social workers who feel that the parents need the right counseling.

Your form could not be submitted.
This browser settings will not support to add bookmarks programmatically. Please press Ctrl+D or change settings to bookmark this page.
Topics : #Weekend Reads | #Karnataka