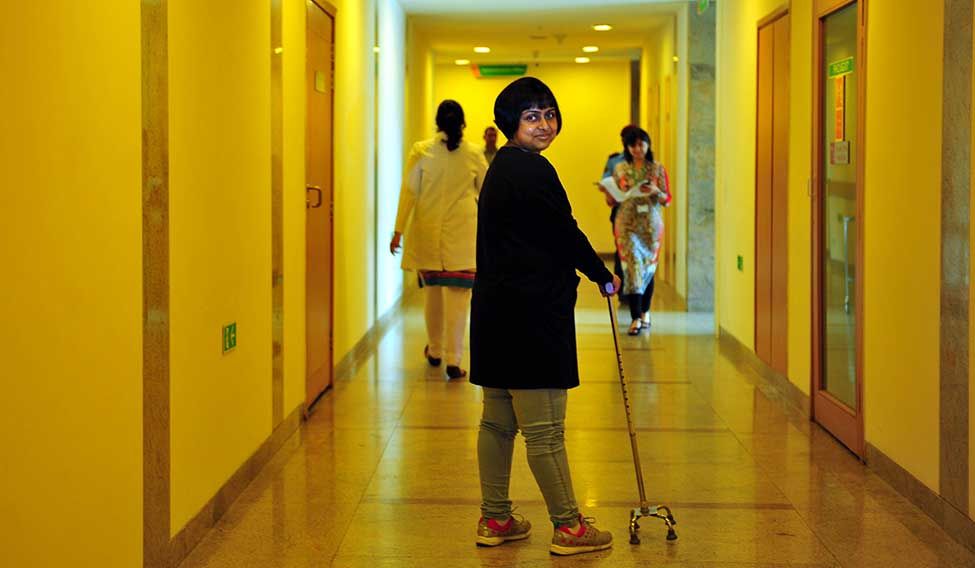 A rare syndrome, several surgeries, a nagging landlord and a lack of funds. Payel continues to fight them all

The walls of her two-bedroom house are bare, damp and dirty. There is not a single window and the cream-hued plastic paint has chipped off. Usually, Hauz Rani in South Delhi is a bustling area, but Payel Bhattacharya and her mother hardly get any visitors. The only person who frequents their home, sometimes four times a day, is a man sent by their landlord, asking them to vacate the house. He banged on the door twice in the two hours we spent talking to Payel.

“Earlier, there used to be a bell outside, but we disconnected it from inside. Payel couldn't sleep, something crucial for her health, because of its shrill noise,” says Banani, her mother.

Payel, 34, has undergone more than ten surgeries in the past few years. She is suffering from the rare Von Hippel–Lindau (VHL) syndrome, in which extremely vascular tumours or cysts keep developing in various parts of the body, including the kidneys, eyes, brain, knees, liver and spine.

When the tumours reach a certain size, they have to be surgically removed. At times, the whole organ has to be removed. A few years ago, Payel underwent a liver transplant because of multiple tumours. “There were so many cysts inside it that it could have blasted,” says Payel, showing us the image of her removed liver on her smartphone. A few months ago, she underwent another major surgery to remove a cancerous tumour from her kidney.

But, where does she get the strength to cope with so many surgeries? “I don’t think about them. I don’t even count the smaller ones,” she says. Currently, she is undergoing radiation therapy to reduce the tumour that has ballooned behind her right eye.

“These tumours and surgeries don't deter me from living. This tumour in my eye, however, is irritating as it has claimed my vision, which I need to pursue my only passion—reading,” she says. Payel has read 70 books in the past two years and says her illness prodded the poet in her to write. She shares her poems with friends on social media. Some, however, she keeps with herself. “They are not to be shared,” she says. “My mother calls me a VHL warrior princess. I am a winner. I have won all my battles so far. I will not surrender to the illness now. My life is precious and I want to live it to the hilt.”

But Banani, whose life revolves around Payel, is worried about her. “Frequent surgeries and prolonged illness have weakened her,” she says. “She can’t be left alone. On April 26, I locked her in the house as I had to go out for some urgent work. When the earthquake shook Delhi, I was kilometers away from our house. The whole building shook and she could do nothing for herself.”

For Payel, every day is a struggle. From morning till evening, she has to gulp two fists full of medicines to keep herself alive. Every second month, she has to undergo a full-body scan to keep a tab on growing tumours. To continue living, she has to get rid of these tumours before they pose a fatal threat.

Payel was hardly 12 when she was diagnosed, rather misdiagnosed, with benign brain tumour. She was too young to undergo brain surgery, so doctors decided to let the tumours be. But, soon after she passed class 12, she started facing severe symptoms. She fainted while writing her medical entrance examination. She then underwent her first major surgery to remove those tumours from her brain.

Her condition is not only debilitating, but its treatment is also expensive. And, arranging money is another big challenge. Payel lost her father to a cardiac failure about nine years ago. A government servant, he spent all his savings on her treatment and raised the rest with the help of his colleagues and friends.

Within fifteen days of her father’s death, Payel was diagnosed with multi-drug resistant tuberculosis. “That was the most difficult phase of my life,” she says. “I was emotionally and physically drained. My treatment was difficult and expensive. And then, when my landlord came to know that I had tuberculosis, he wanted us to vacate the house. It was too much to handle.”

Now, the only earning member of the family is Payel's younger brother, a cinematographer in Mumbai. “Because of my illness, he lost many good assignments at the start of his career. His income is not enough to take care of my treatment,” she says.

So, Payel decided to take charge of her treatment. She started a Facebook page and registered on many more social media sites. She connected with many institutions, groups and people across the world who were associated with VHL. She tells them about her disease and life and raises money for her treatment. “Most of the funds I raise are individual contributions. There are not many organisations who help people like me. These contributions are not permanent. It requires constant effort,” she says.

Payel, however, knows the road ahead is more difficult. She has a feeling that the recent tumour in her kidney has left some residue and it might return. But, she will not give up. “I have sailed through so far. I am not going to drown at this stage,” she says with a smile.