The fighting in Yemen has brought home many lessons that are important to India. To start with, the Arab world is now clearly facing a Shia-Sunni divide. The growing clout of Iran and its Shia militias all across the Arab world—apparently now in Yemen, as per Riyadh—has made the Saudis paranoid and, thus, a Saudi Arabia-led alliance of Sunni countries, ironically all monarchies, has been bombing Yemen to reinstate the government (which, in reality, is a puppet regime of the Saudis). Armed to their teeth and goaded by their western arms suppliers, this coalition of GCC countries decided it was time to flex their muscles, without putting boots on the ground. The Saudis were hoping that the real fighting for them in Yemen, against the Houthi rebels, would be done by Pakistan, whom they have paid and protected all these years.

But, to their shock (and that of the UAE), the Pakistani parliament, perhaps prodded by their generals, has voted against sending their soldiers to fight in the Arab peninsula. Pakistan’s army is stretched, fighting the Taliban and keeping itself fully deployed to meet what they claim could be an Indian invasion (which is most unlikely). In reality, the Pakistani army has a 70-30 Sunni–Shia ratio and, by responding to the Saudi demand for only Sunni troops would increase the existing sectarian Shia-Sunni tensions in Pakistan. So, Islamabad’s assurances that it will defend any threat to Saudi territory is not reassuring for Riyadh anymore. Pakistan’s duplicity will have a negative impact on its standing in the Arab world in general and, in particular, on the funding it receives in future. 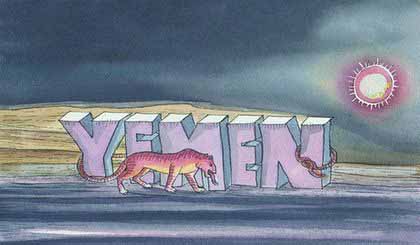 How Islamabad plays its cards hereafter will have to be seen, as sectarian conflicts are not going to be over even if the GCC alliance gets its way in Yemen. In fact, the Arab world is now a melting pot of militias, either backed by Iran—such as the Hezbollah and the Hamas—or by Sunni groups backed by Saudi Arabia and Qatar, among others. Some analysts say that the dreaded Islamic State is a product of this sectarian rivalry. Set up initially to topple the regime of Syria’s Bashar al-Assad, it is now a monster that threatens Arab regimes. Its heavily armed militias are a match for many of their armies, as the Iraqis learnt last year when the IS overran many of their ungoverned areas, grabbing towns and banks, oil wells and huge caches of arms. But, even then, the ability of the IS to influence events in the world is largely overrated. It inspires the disenchanted youth of the Arab world, but does not enjoy the influence that the Al-Qaeda does from Pakistan to Morocco.

A handful of Indians have no doubt been attracted to the IS, lured by its aggressive propaganda on social networking sites that has attracted a much larger number of Europeans to its fold. But, for India, the challenge of the ongoing wars across west Asia is essentially twofold. One is that the region supplies the bulk of India’s oil and gas needs, and further instability there could have adverse implications for India’s economy. India should, therefore, not just explore other options for importing oil and gas from Africa and beyond, but also step up the use of alternate energy sources in the country.

And, the other is about the safety and wellbeing of more than eight million Indians settled in Arab countries. They provide huge remittances back into the country, running into billions of dollars, which support so many families in India. And, though the recent crises in Yemen saw an impressive evacuation effort that pulled out more than 4,700 Indians, the evacuation of a few million Indians could be almost an impossible task.

Your form could not be submitted.
This browser settings will not support to add bookmarks programmatically. Please press Ctrl+D or change settings to bookmark this page.
Topics : #Hawk Eye