Talk to the generals

Even though SAARC is a group of eight south Asian countries, the recent summit in Kathmandu was hijacked―like almost all previous summits in the past three decades―by media attention being focused on whether the prime ministers of India and Pakistan will revive the stalled dialogue process. However, to any astute analyst, that was not going to happen. The ground realities of Pakistan give us little room for optimism, at least for the moment.

India wants Pakistan to abandon its links with terror outfits and all separatist groups in Jammu and Kashmir, who have for long been cultivated by Pakistan’s establishment and paid for by Pakistan’s intelligence agencies (ISI). Moreover, six years after the 26/11 attacks, the glacial pace of the investigations and trials in Pakistan has given India little cause for joy.

In reality, little is to be expected from a country where terrorists are local icons and have the army’s support. Even the judges are reluctant to sentence them. If they do so, they either become a target themselves or have to leave the country. Moreover, their army still regards Hafiz Saeed and his the Lashkar-e-Taiba as assets.

Apparently, his stock has only gone up since 26/11, and he is now an anti-India strategy adviser to Pakistan’s military hawks, says Saroj Rath, the author of a rather incisive analysis on the 26/11 attacks, titled Fragile Frontiers: The Secret History of Mumbai Terror Attacks. Clearly, Hafiz Saeed is revered and shielded by his patrons in Pakistan’s military establishment, for whom he had initiated the 26/11 attacks at India’s commercial hub. And though Modi might insist that his Pakistani counterpart should do more to rein in the jihadis in Pakistan, Nawaz Sharif―who has failed to turn his economy around as well as to address the instability in his country―is now echoing his army’s line on Kashmir to keep himself politically afloat. 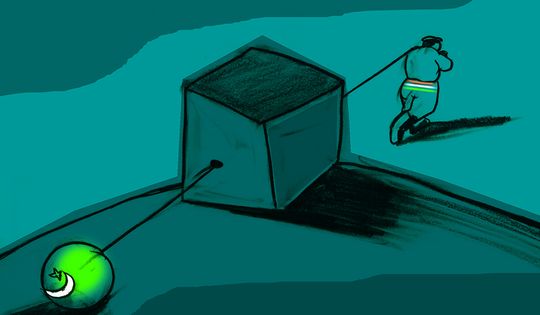 Sharif has attempted to internationalise the Kashmir issue whenever he has had the chance. Even a courtesy phone call from US President Barack Obama, to tell him that he will be in India on January 26, was seen as an opportunity―Sharif asked him not to forget the Kashmir issue when attending all those ceremonies on India’s Republic Day! He did what he was expected to do. We only need to read the superb account by Christine Fair titled Fighting to the End: The Pakistan Army’s Way of War, to be reminded of the Pakistan army’s enduring and fatal obsession with Kashmir. She writes: “Pakistan will suffer any number of military defeats… but will not acquiesce to India.” This would be for the Pakistan army a genuine and total defeat.

Thus, Pakistan's civilian leaders are left without a choice. Benazir Bhutto admitted in 1999 that her government’s Kashmir policy was the worst mistake of her life (never mind the recent childish chest-thumping of her son, Bilawal, over Kashmir). What then are India’s options, faced as we are with their army’s obsessive policy over Kashmir? The approach should be twofold. One, we should not expect the dialogue with Pakistan's civilians to lead us anywhere. India must insist that Pakistan’s army formally be a part of any future talks, bypassing the objections of our MEA-wallahs, and adding a few of our generals for the sake of form. Pakistan is not a normal country, so normal diplomacy will not work. Second, we have to ensure that any agreement must have Pakistan's generals as signatories. History has shown us that their army respects only those agreements that their generals are signatories to or have initiated, like the Indus Waters Treaty or the Line of Control agreements. Other treaties or declarations are of no relevance to them.

Your form could not be submitted.
This browser settings will not support to add bookmarks programmatically. Please press Ctrl+D or change settings to bookmark this page.
Topics : #Hawk Eye | #SAARC