For a country to attain global pre-eminence it must address the key objectives of national and strategic importance by using its hard and soft power. Despite being a regional nuclear power, India's soft power capabilities―socio-cultural strengths or information technology prowess―are overrated. In reality, it is seen as the world’s back office.

Having moved from an agriculture-centric economy to a techno-savvy knowledge economy without enough industrialisation, India lacks a serious military industrial complex. So it pours money into the global arms market―it is the world’s largest arms importer with a projected outlay of $200 billion in the next 15 years. It has yet to enhance its own capabilities because of a disconnect between the civilian leadership’s aims and what strategic wisdom suggests, and an absence of any long-term plans in New Delhi. India has not produced a single document that sets out its goals and concerns.

India's armed forces continue to train and equip themselves for conventional wars that are most unlikely to happen―the world won’t allow another 1971-type Indo-Pak war, though Kargil-type conflicts might be tolerated. Our biggest threat is of terror attacks from across the borders. But are we sufficiently prepared and equipped to respond to another 26/11-type attack, possibly launched from Pakistan? Moreover, India’s neighbours have generally been ignored, despite the challenges that illegal migrations could pose for India.

Beyond the neighbourhood, the two areas where India's attention should remain are West Asia and the Indian Ocean region, where China continues to expand its presence and adopts coercive diplomacy. West Asia is the source of India's energy security, which is crucial for its economy. More than 80 per cent of its energy needs are serviced by countries in the Gulf. But the unhindered supply of oil and gas has subdued the initiatives on how India could harness and exploit its own energy resources. 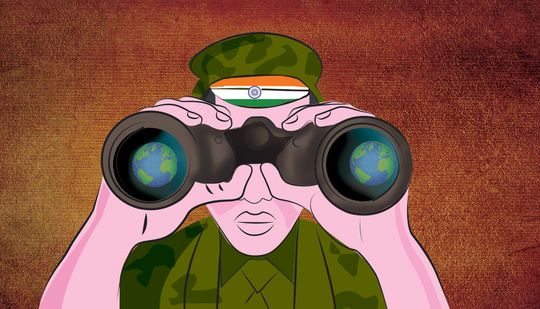 There is also the rise of Islamic fundamentalism―another West Asian product. That it is finding sympathisers in India needs to be closely monitored, as India has a large Muslim population and a large number of Indians work in the Gulf countries.

As a country which enjoys a premium location on the map of Asia and an attractive destination for investment, India is of keen interest to China and the US. China is India's largest neighbour, more powerful and now omnipresent in Asia. The US is still the only global power with both hard and soft capabilities. It is also an Asian power with its strong military, economic and diplomatic presence on the continent. It has for some years been keen on enacting a concert of democracies with India to counter China's ambitions, but New Delhi has been cautious and cold. China, with its deep pockets, is keen to invest in India, but here, too, India’s response has been cautious.

Obviously, India has failed to explore how it could use them both to its advantage. But it is time Indian leaders began to understand how to use our hard power (military capabilities) along with soft power (its diaspora, economic edge and knowledge clout) to position it geopolitically favourably in Asia.

Your form could not be submitted.
This browser settings will not support to add bookmarks programmatically. Please press Ctrl+D or change settings to bookmark this page.
Topics : #Hawk Eye | #China | #United States