Since 1958, when Japan chose to give official development assistance (ODA) to India—its first to any country—Indo-Japanese relations have moved steadily along, with the exception of the immediate aftermath of the Pokhran nuclear tests of 1998. India has been one of the largest recipients of ODA, receiving approximately $36 billion in the past few years alone. The recent visit of Japanese Prime Minister Shinzo Abe to India, which resulted in a number of deals and partnership accords, made news not just in India, but even abroad. And, it isn’t the $12-billion Make in India fund to encourage Japanese investments or the $12-billion package for India's first bullet train project, but the agreement to pursue a civil nuclear arrangement that marks a significant shift in Japan’s nuclear beliefs and is proof of the new strategic equation between the two countries.

No wonder Abe made it clear that the nuclear deal and seven other deals inked during his visit are not just about economic choices, but are also security choices for Japan, as Tokyo has been watching warily how China has resorted to deep-pocket diplomacy for its One Belt, One Road initiative, which would build roads, airports, power projects and railway systems across Eurasia and the Indo-Pacific region. Chinese President Xi Jinping has put his weight behind the initiative, as China outbid Japan for big infrastructural projects in southeast Asia. Worse still, India joined the Chinese-backed $100-billion Asian Infrastructure Investment Bank and the $50-billion BRICS banking initiative led by China, even as Japan watched from the sidelines with growing concern. 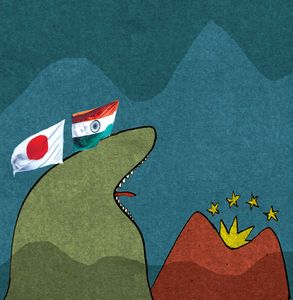 But this doesn’t mean that all is hunky-dory between Delhi and Beijing. Indian policy makers watch nervously how China surrounds India with formidable infrastructure projects in Myanmar, Tibet and now in Pakistan, while still enjoying enormous advantages in bilateral trade with India. Sino-Indian trade has grown more than 20 times in the past decade, but the trade gap between the two countries stands at $35 billion in favour of China. What India needs is a counter to China as an investment partner and this is where Japan, having learnt its lesson in southeast Asia, has stepped in. Analysts are of the view that Japanese investments could help the Indian economy just as it did for the Asian tigers like South Korea, Hong Kong and Taiwan and the ASEAN group including Singapore, Indonesia and Malaysia in the 1990s, and help India’s economy take off.

What Japan would perhaps like in lieu is a strategic-military partnership with India to counter China’s aggressive behaviour in Asia. In the South China Sea, Beijing has been ignoring the established laws and conventions of the seas and laying claim over islands and atolls by establishing military bases on land it has reclaimed. The US and countries like the Philippines and Vietnam oppose this. Over the past two years, Japan has shown that it is not averse to challenging Beijing’s land grab policies, by confronting it over the Senkaku islands in the East China sea. Under Abe, Japan is moving towards becoming a normal military power unencumbered by its constitutional limitations on the use of force. India has the naval capability to unsettle China’s designs in the South China Sea. But the question is how far will New Delhi go to contest the Chinese drive to dominate Asia.