The exotic ingredients of the pizza worth $2,000 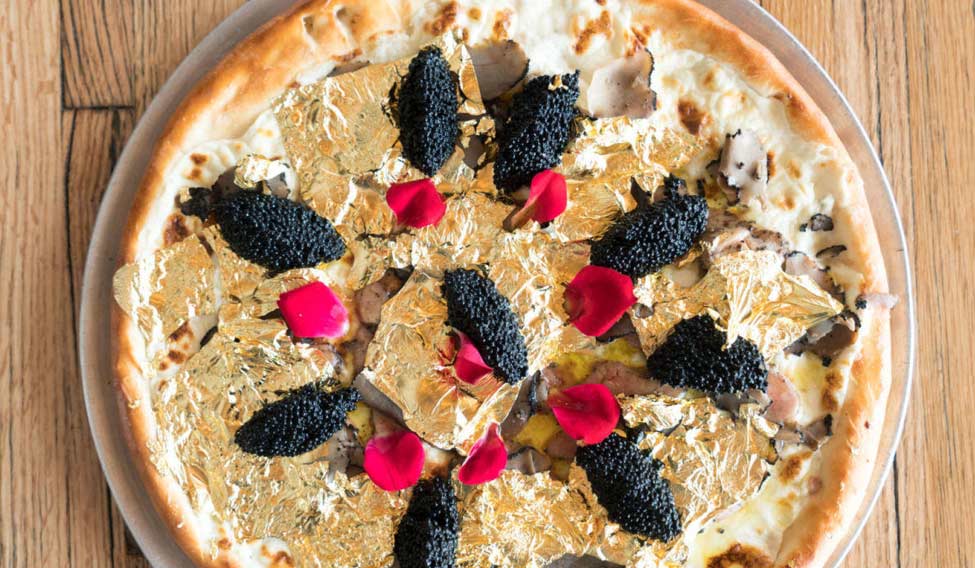 In an INSIDER video of the making of the Golden Pizza, Executive chef Braulino Bunay, the mastermind behind the recipe, stretches out the black squid ink pizza dough, just like a standard pizza dough, and spreads white stilton cheese over it. He then bakes the pizza in the wood-fired oven. Bunay tops the pizza with thin slices of foie gras and strips of 24-carat gold leaf, followed by a generous sprinkle of gold flakes. He garnishes it with shaved black truffles, large scoops of Ossetra caviar and edible flower petals. The result is a beautiful, Instagram-worthy pizza.

Does it sound similar to regular pizza recipes? Hang on, it is not the recipe that makes the Golden Pizza so expensive, but the ingredients.

Gold, one of the ultimate gourmet luxuries, interestingly, has no taste or nutritional value whatsoever. For long, edible gold has been a popular choice of decorative among chefs to augment a dish. The tasteless, biologically inert metal, when ingested, passes through the digestive tract without being absorbed by the body. The purer the gold is, 22-24 carats, the safer it is to consume it. The fact that the Golden Pizza recipe uses 24-carat gold from the land of gold mines, Ecuador, only makes it inexcusably opulent.

Protected by Designation of Origin by EU, only seven dairies, located in Derbyshire, Nottinghamshire and Leicestershire, are licensed to make White Stilton cheese. Stilton is a protected name and cannot be used by any other cheese maker in world. The cheese gets its name from the village of same name in Cambridgeshire where it was first made and sold. However, today, no dairy in the Cambridgeshire is a  licensed producer of Stilton cheese. It is made from locally-produced, pasteurised milk and can only be made in a cylindrical shape. Also, unlike most other cheese, Stilton is never pressed. The young cheese has crumbly, open texture with a slightly acidic taste. As it matures, it develops a smoother, creamy texture, with a more rounded mellow flavour.

Stilton also comes in a blue-veined variety, which is made by adding blue mould spores to the processed milk. As the cheese sets in, the traditional crust of the cheese is pierced with stainless steel needles to allow the entry of air into the core and create the distinctive blue veins associated with Blue Stilton.

Ossetra caviar from the Caspian Sea

Caviar is the salt-cured eggs obtained strictly from three types of sturgeon fish—Beluga, Ossetra and Sevruga—in the Caspian and Black Sea. Considered to be most flavourful and high value, Ossetra caviar is among the most sought-after varieties of the delicacy. The medium-sized Ossetra Caviar ranges in colour from deep black to dark brown to golden yellow. The caviar has a unique nutty, light-salt flavour, that may vary slightly depending on the time of the year it is harvested. It is mainly because Ossetra is a bottom-feeder and its eggs acquire the flavour of what the fish eats during a particular period. The texture of Ossetra Caviar tends to be firm, yet delicate and buttery enough for it to roll smoothly over the tongue. Also, the worlds finest Ossetra caviar is found in the Caspian Sea. Perhaps, that explains the chef's pick for the Golden Pizza.

A slice of foie gras

Well-known French delicacy, foie gras is the fattened liver of a duck or goose. Unlike ordinary duck or goose liver, foie gras has a rich, creamy flavour and smooth, delicate texture. Though most food connoisseurs consider foie gras to be a gourmet luxury dish, many animal lovers think otherwise. It is not just the killing of the birds alone, but also the process through which foie gras is obtained—gavage—that has been the cause of controversy. Gavage is the French term for the force-feeding of the birds through a tube that is inserted into the birds’ mouths and down the oesophagus, resulting in unusual fattening of the birds’ livers—up to 10 times the original size. While many countries have banned foie gras on ethical grounds, the French law states: "Foie gras is part of the protected cultural and gastronomic heritage of France. By 'foie gras' is meant the liver of a duck or a goose specifically fattened by force-feeding."

While chocolate truffle may have derived the name from its colour and texture, the chances of a truffle cake at your local bakery having to do anything with real truffles is highly unlikely. A truffle is a subterranean fungi with a musky, garlicky taste and a unique smell produced by androstenone, a pheromone also found in male pigs.

A truffle is a natural product that cannot be cultivated or controlled. It has to grow on its own, in its natural habitat. Mostly found in Italy and France, a truffle could be any of the species of fungus that grows entirely underground, inside the roots of trees such as beech, chestnut, oak etc. For reproduction, the fungus grows an underground tuber, smelly enough for animals on ground, especially female pigs, to be able to locate it and dig them up for food. In the process, the animals would spread the spores in the area. The spores that end up near the roots of some other tree grow to form another tuber and so on. In fact, once truffles are unearthed by human hunters, who find them with help of trained dogs, a piece is put back into the ground to act as a spore and repopulate. The fact that truffles grow in the roots of trees and need specific type of soil and climate makes it almost impossible to farm it, making it one of the most expensive—worth approximately $2000-3000 a pound—and treasured possessions in the international haute cuisine. The rarer variety, white truffles, are even more expensive.