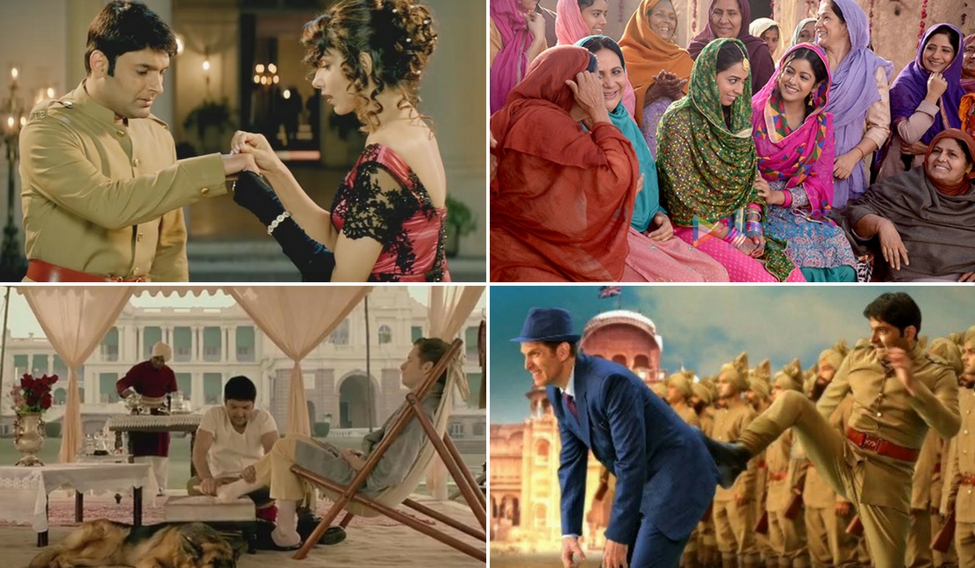 Stills from the movie Firangi

Actor Kapil Sharma, in a recent interview with THE WEEK, said about Firangi: “Anybody who touches the pre-independence period see only the dark side, so we thought of showing the lighter side. On one hand our krantikaris were killing the British and vice versa, but alongside, people were living their life.” That one answer lays to rest all your doubts of it being a 'krantikari' film. It was quite pleasing to see how honest he was about it. What he did not mention was that this film could have very well been set in post-independence period, with a local administrator or politician replacing corrupt British officers and an evil Indian king; it would not made any difference.

Set in 1921, Firangi is a lackadaisical love story with shades of patriotism and major influence of two films depicting the same period—Lagaan for plot and Phillauri for visual treatment. Unfortunately, the film falls flat on both accounts. While Lagaan gave a realistic portrayal of life and desperation of Indian villagers, exploited by colonial masters, Phillauri gave a glimpse into the life of commoners who were far away from the direct impact of the British rule, but still were inextricably woven together with fate and tragedy—the Jallianwala Bagh massacre. Firangi, on the other hand, falls short on multiple fronts, be it the script, dialogues, cinematography, or even individual performances.

The plot sounds familiar, for obvious reasons. Manga (Kapil Sharma) is a simple-minded country bumpkin with a heart of gold. He falls in love with sweet-as-sugar belle Sargi (Ishita Dutta, last seen in Drishyam) from the neighbouring village. His interests, passions and goals in life converge to a single point—getting married to her. Based purely on his talent to kick (literally!) ailments out of people, he lands the job of an orderly to a corrupt British officer Mark Daniels (Edward Sonnenblick). Manga loves his job and finds pride in wearing the uniform and carrying out minor tasks for the man. Trouble arises when Sargi's grandfather Lala ji (Aanjjan Srivastav), a Gandhi bhakt, refuses to let his granddaughter marry a “angrezon ka naukar (servant of the Englishman)”. Meanwhile, Sargi's village is under threat as Raja Indraveer Singh (Kumud Mishra) and Mark Daniels plan to take control of the entire hamlet, evict its residents and use the land to build a foreign liquor factory.

They dupe the villagers into signing land papers to make it legal. Manga sees an opportunity to impress Sargi's grandfather and dives into the damage control mode, making the situation even worse before proving his worth to Lala ji and others. Yes, this is what the 160-minute film is all about. To add to caricature of characters, you have a village Pehelwan who talks, walks and even gets angry like Sunny Deol in his many films, but turns out to be a softie. Oxford-returned Rajkumari Shamli's English accent keeps fluctuating between American, British and Indian. Interestingly, for most part of the film, the royal lady speaks to British officers in Hindi and to villagers in English. In one scene, a villager tries to bring it to her notice, but in vain.

Overall, the film is a lame effort at being a romantic period drama. Firangi is a very long drag full of fake-looking scenes and mediocre performances. No long shot of the village in question has more than five to seven houses in the vicinity and makes you wonder where all the people threatened by land grab live. Royal palace interiors look as modern and chic as it can get today. Ishita Dutta doesn't have much to do except look pretty and in love. Chef-turned-actor Edward Sonnenblick does a decent job as the mean Mark Daniels. Kumud Mishra as the evil king is neither menacing nor convincing. The script fails to explore the potential of talented Rajesh Sharma (of the Tanu Weds Manu Returns fame) as Sargi's father. Kapil Sharma tries (and fails) to pull off the film with just one facial expression—deadpan. At one point, you feel as Firangi traded Kapil, the ace comedian for a struggling romantic hero. But then, who is to be blamed when he is also the producer. When asked why he chose Firangi to be his second film, he had said: “Firangi was different. It has comedy and all the other emotions as well. Also, some money was lying idle which was hurting me.” That says it all!