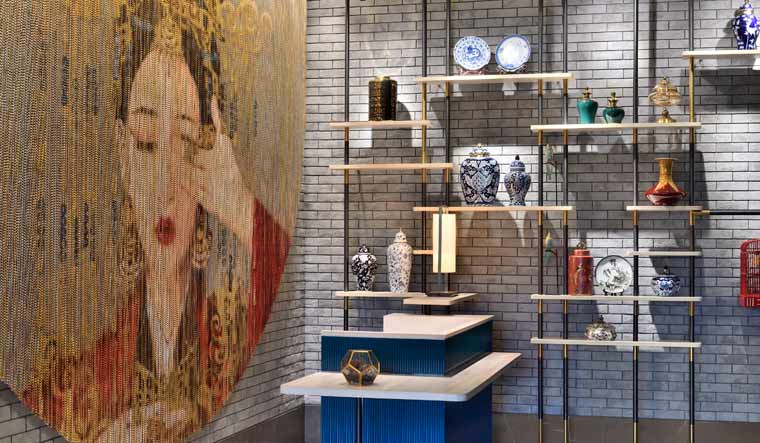 The root vegetable taro, or the humble kochu in Bengali, is used for all intents and purposes in China—as a flavour-enhancing element, as a bottled drink, a bun or a stew in a hot pot. It is also fashioned into a nest in traditional Chinese cuisine where grated taro (which is, in fact, arbi in Hindi) is fried to a delicate crisp and is later used as a base for fillings. The beautifully frizzled nature of its outer shell found a perfect expression in taro dimsums, part of the menu at the splendidly redesigned House of Ming in central Delhi.

Reopened last month after a year of full-scale renovation, House of Ming at the Taj Mansingh Hotel in Delhi has a gastronomical confluence of the old and the new where Sichuan, Cantonese and Hunan cuisine are celebrated in a timeless manner. It was also the capital's first five-star Chinese restaurant when it opened in 1978. In its latest iteration, the legend of the mysterious Ming princess floats like a shimmering dream over the restaurant. They are realised in chandeliers which hang down like her expansive, star-studded hair bun and light fixtures which could well be her beaded pendants. An Indian painter who is supposed to have spotted the elusive princess only by her intricately decorated hair bun once produced her possible likeness in a painting. A version of that mysterious painting is rendered as a striking intro to the restaurant.

With over 140 dishes, this is more than a house of plenty. But the sumptuous dimsum spread is unmissable with a range of stuffing, and several inventive casings—from potato starch and wheat flour to deep fried and baked rice. Prawn har gow bedecked with a gold leaf to truffle oil prawn sumai. But the taro dimsum steals a march in the most surprising way, reminding one of flavours and textures which are a curious blend of the classic and the evolved. "This dimsum is fried in a very specific way where it is inserted in the oil very slowly. Taro is first cooked like a mashed potato but a little bit more drier. While taro forms the casing, the stuffing is made of water chestnut. If taro is not cooked properly, it can burn your throat," says Chef Arun Sundararaj, director of culinary operations at the hotel.

Taro is an extensively used ingredient in Bangladesh and has been introduced in the kitchens of West Bengal as an act of cultural memory, enriching the narrative of "migrant seasonings". Think maan kochu bata (taro root paste) to kochu shak. The root vegetable from the colocasia family may not be very appetising to look at, but taro's breathtaking range as is now being realised in fine-diners across India, in tacos, crackers, dimsums and beyond.