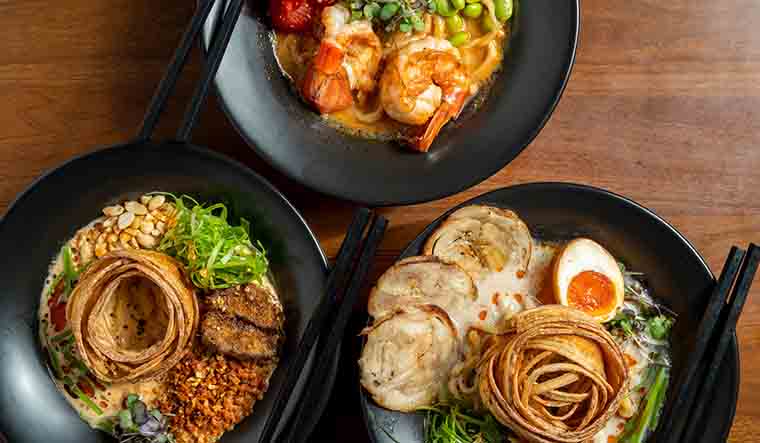 In strict Japanese custom, you are not supposed to linger over your bowl of ramen. Popular as a working-class dish during the reindustrialisation of Japan in the 20th century, traditional ramen joints are standing rooms where you quickly dive into your bowl of steaming hot noodle soup, slurp and begone to make way for the next in line of noodleheads.

At Mensho Tokyo, one of Japan's most popular chains of ramen bars which opened its first India outlet in Delhi last year, you won't like leaving so quickly. The basic, effortlessly curated palate lulls you to stay. They say it's only a matter of time before you find your kind of true ramen and become a devotee for life. It is hard to say which restaurant in the capital serves the best ramen - and frankly it doesn't matter - but if you are open to switching allegiances from sushi to ramen as the go-to Japanese staple, then Mensho Tokyo might be the place to start. In fact, you can trust your food memory to erase sushi here as the diner with a giant communal table serves a wholesome mix of ramen, donburi (rice bowls) and zensai (tapas) like their delicately patterned gyozas and spicy dynamite prawns. A live kitchen looks out to the whole seating area with no-fuss interiors. Hard-pressed servers burst in and out through swinging doors. By 9pm on a drizzly Friday evening, it's full and lively with people waiting to clamber onto bar stools or talk over each other in scattered groups. Mensho Tokyo has all the trappings of a quaint little ramen shop if there could be one recreated in Delhi.

Started in 2005 by Michelin-rated chef Tomoharo 'Menya' Shono, the Mensho Tokyo chain of restaurants soon branched out of Japan to set up outposts in San Francisco, San Rafael and Bangkok before making a foray into India, which is learning to appreciate ramen a lot more with increasing Japanese investment. In Delhi-NCR itself, there is a sizeable number of authentic Japanese restaurants in and around the business towers and sky-scraping condominiums of the Millennium City, Gurugram. These are restaurants run by Japanese expats who dish out menus far more diverse and edgy than the gleaming, fine-dining, “contemporary” variants in south and central Delhi.

But Mensho Tokyo can be relied upon to take on the mantle of whipping up a discerning yet hearty bowl of ramen in the heart of Delhi. From Enoki chips to the lamb ramen spiced with sichuan pepper, panko fried Tofu Donburi to the Vegan ramen in a heartwarming broth made of chilli oil, nuts, crisps and micro-greens, there's something here for everyone, ramen-raver or not. The acclaimed chain in Japan is known for its tonkotsu style of ramen where hand-pulled noodles are dunked in a deep, rich pork-based soup. Popularly known as "ramen creator", chef Menya Shono is also known for more experimental variations like the chocolate lamb ramen. The Delhi outlet is also overseen by Menya Shono, who flew in directly from Japan to train his Indian kitchen army about the strict portions, ingredients and the specific noodle varieties to use. Noted Chef De Patisserie Vidushi Sharma and her partner Viren Khuller brought the Michelin-starred chain to India.

The ramen industry is an ever evolving one and the love and care that goes into dishing out the perfect bowl of this intricate noodle soup is the stuff of documentaries and TV shows. But Mensho Toyko is worth a try if you are still searching for that perfectly nourishing bowl of ramen.

Mensho Tokyo is open at New Delhi's M-Block market in Greater Kailash-2. A meal for two is around Rs 2,500 without alcohol.