On the right track

Corporates go all out to make roads safer

One road accident is all it takes to sully the image of a large corporate. Just ask Janhavi Gadkar. The vice president of legal affairs at Reliance Industries was recently booked for drunk driving and culpable homicide. Gadkar had had a few drinks with RIL’s chief financial officer Alok Agarwal, after which she rammed her Audi Q3 into a taxi, killing two people.

Reliance had to issue a disclosure to Bombay Stock Exchange that its CFO had been summoned for investigation. The company also issued an advisory to employees on the perils of drunk driving. “If you're planning to drink alcohol, also plan how to get home without having to drive yourself,” said the note to employees.

Reliance, however, is not alone in this drive of caution. Companies across sectors are getting serious about road accidents as involvement of employees or a product or service mars their image.

According to Save LIFE Foundation, a non-profit organisation that works to improve road safety, almost 1.4 lakh people were killed and nearly 5 lakh seriously injured or permanently disabled in road accidents in 2013.

The Society of Indian Automobile Manufacturers says automakers have been adding more than 1.5 crore vehicles to Indian roads every year for the last four years. India has 1 per cent of the world's vehicles, but accounts for a tenth of all global road deaths. According to data from the ministry of road transport and highways, one person dies every 4 minutes on Indian roads. 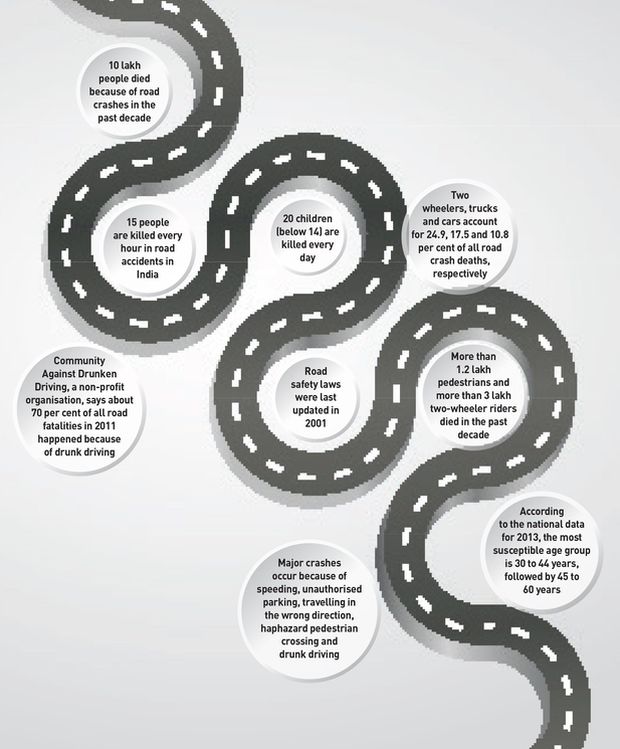 Take, for instance, GMR. Being one of the strongest private players in highways, the company understands the amount of brand equity at risk when people travel on their roads. An analysis by the company’s highway team found that crashes occur because of speeding, unauthorised parking, travelling in the wrong direction, haphazard pedestrian crossing and drunk driving.

To improve safety, GMR has installed cable barriers at critical curves and solar blinkers at all high-crash locations. It has installed foot-over bridges at important junctions and has closed all unauthorised median openings.

At lubricant major Castrol, road safety initiatives are based on the premise that all incidents are preventable. As a first step, the company works with vehicle manufacturers to strengthen safety features in vehicles, often going beyond standards incorporated by manufacturers themselves. For its own employees (mainly sales professionals), Castrol had custom-made vehicles built at a time when airbags and anti-lock braking system were not available in locally manufactured small- and medium-sized vehicles. The company prohibits night driving for employees and associated transporters as most accidents happen at night.

Says Ravi Kirpalani, managing director, Castrol India Limited: “More than 70 per cent of road accidents occur because of driver error. To better equip our drivers and acclimatise them with road conditions and driving principles, we have our own driving skills evaluation programme. Over the years, around 20,000 truck drivers have undergone Castrol’s driver training programme.”

Automakers play the most important role in the road safety ecosystem and a significant part of their CSR spending goes towards road safety initiatives.

Luxury carmaker Mercedes-Benz has made road safety a moral responsibility and plans to bring down the alarming rate of accidents in the country. It recently launched Safe Roads, an initiative that creates awareness about road safety through physical demonstration, visual aids and research reports.

According to its sample study, drivers did not try to avert the crash in 50 per cent of accidents. Only in 30 per cent of the accidents did drivers brake or swerve or do both. Also, only about 16 per cent of drivers and front passengers use seat belts. The company's programme will make road users understand the impact a seat belt has in a crash scenario. “Our latest contribution is that all Mercedes-Benz vehicles in India now come equipped with new rescue stickers with QR Codes, which helps the rescuer know where to exactly position the rescue tools on the cars, making occupant rescue safer,” says Eberhard Kern, CEO, Mercedes-Benz, India.

Automaker Volvo has also introduced some new features in its vehicles. These include driver alert support to detect inattention and drowsiness, and to help drivers change lanes. The company also has an institute which has trained about 60,000 drivers in India. Volvo is a partner in the Face It campaign started by the Association of Oral and Maxillofacial Surgeons of India (AOMSI). The awareness campaign includes a video that shows the consequences of not wearing the seat belt or a helmet. Says Dr Sanjiv Nair, president of AOMSI: “Facial and head injuries are the most common forms of damage in a road accident. Though we try to reconstruct the face, it can never be what it used to be earlier. Beautiful people end up with horrible-looking injuries.”

Under this initiative, maxillofacial surgeons visit high schools and colleges to educate youngsters about the dangers of not following safety instructions.

Nair gets about 50 cases a month. “We lose so many productive lives every year to road accidents,” he says.

Road designs also have a major role to play in accidents, says Kern. “Factors such as proper signage, angle of turns, material used to make the roads and transitions from a highway to smaller roads are additional reasons for steep rise in accidents in India,” he says.

While the Union government is readying a road safety bill, experts believe that enforcement will be a challenge. “We feel that thrust is also required to improve the skill level and competency of the stakeholders involved at the ground level to strengthen its implementation effectively,” says Kirpalani. “The other area of focus will be to raise the level of awareness about driving behaviour and improve the responsibility of public at large.”