No burst in Amsterdam 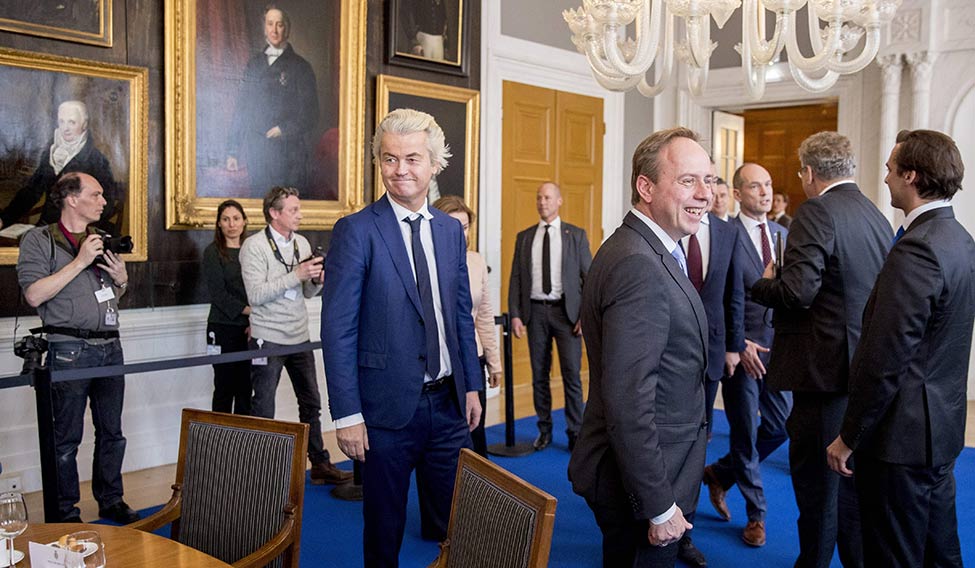 Down, but not out: Geert Wilders (clad in navy-blue suit) arrives for a meeting with the chairman of the senate in The Hague on March 16 | AFP

The Netherlands holds back its Trump. But the surge of the far-right and far-left brands of populism may continue to radicalise Europe’s mainstream middle

Europe just heaved a huge sigh of relief. Geert Wilders, the Netherlands’ far-right leader nicknamed the “Dutch Trump”, failed to pull off his populist revolution in a keenly watched election.

His anticipated success was pregnant with dire implications for the European Union (EU). But it turned out to be a false alarm. The anti-EU, anti-immigration, anti-Islam populist tidal wave appears to have ebbed, for now. Leaders of France and Germany who face populist threats in impending elections are particularly relieved.

“The values of openness, respect for others, and a faith in Europe’s future are the only true response to the nationalist impulses and isolationism that are shaking the world,” exulted French President Francois Hollande. “This is a clear victory against extremism.”

Tweeted Guy Verhofstadt, leader of the Alliance of Liberals and Democrats for Europe in the European Parliament: “People want constructive and reliable politicians to govern their country. This is why Le Pen (French far-right leader Marine Le Pen) will also fail.”

Dutch Prime Minister Mark Rutte played his cards well. In the final days of the election campaign, he warned of “chaos” if Wilders was allowed to form the government, urging voters to “make a point” to the world by rejecting Wilders’s intolerant agenda. Supporters responded to his call. Wilders, who wanted the Netherlands to the leave the EU, was put in his place by 81 per cent of the Dutch electorate who voted, the highest turnout in 30 years. Even the youth came out in droves to protect the liberal identity of their nation and prevent what happened in Britain, where millions of voters, especially the youth, did not bother to vote in the Brexit referendum. The Dutch nixed Nexit in the bud.

The outcome thrilled European leaders. In a personal letter to Rutte, European Commission President Jean-Claude Juncker wrote, “The people of the Netherlands voted overwhelmingly for the values Europe stands for: free and tolerant societies in a prosperous Europe. The result of this election is an inspiration to many.” Hint, hint, to the French and German voters! Juncker ended his letter exclaiming in Dutch, “Laten we samen bouwen aan een sterk Europa! [Let us put our heads together for a stronger Europe].”

In the autumn elections, German Chancellor Angela Merkel faces a stiff challenge from the populist Alternative for Deutschland (AfD) in her attempt to be chancellor for a record fourth term. Much of the public anger and resentment in Europe against the influx of Syrian and Afghan refugees stems from her decision to open the floodgates two years ago. In her typical staid fashion, Merkel observed, “I was very happy that a high turnout led to a very pro-European result. It was a good day for democracy.” Her chief of staff, Peter Altmaier, was more exuberant. “The Netherlands, oh the Netherlands, you are a champion!” he tweeted.

The Dutch poll is certainly not a storm in a teacup. Much can be interpreted from the tea leaves left behind by this tumultuous election. It signifies not merely the retreat of populism for now. As Rutte said, “The voters have rejected the wrong sort of populism.” 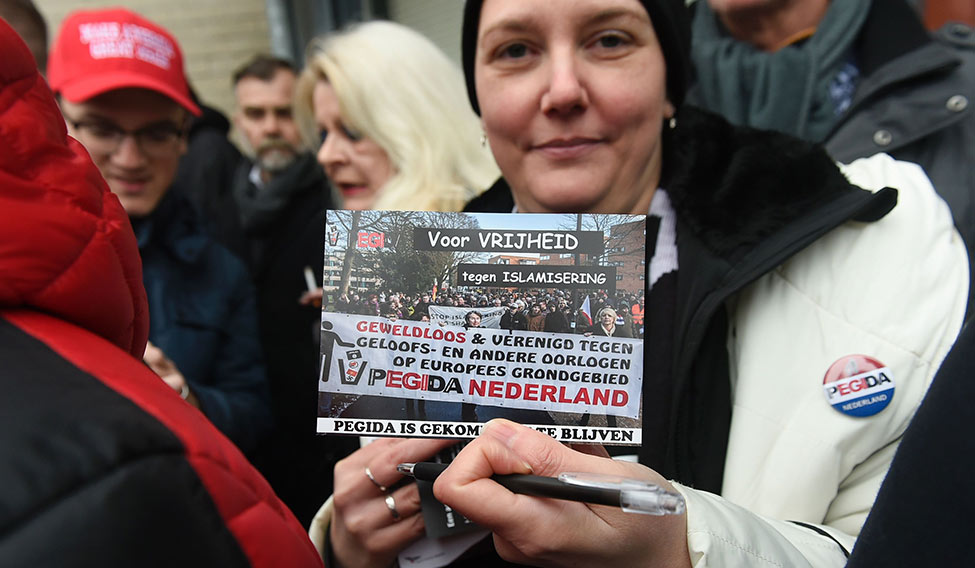 Tough message: A Wilders supporter in Spijkenisse shows a flyer that reads “for freedom and against Islamisation” | AFP

The key word is “wrong”. The main reason Rutte won this election is that he told immigrants: “Behave normally or leave!” He co-opted some of Wilders’s popular, less extreme views, much the way Narendra Modi co-opted Arvind Kejriwal’s crusade against corruption. Both the prime ministers reaped rich dividends.

The declawing of populism is not the only message from the Dutch election. Equally significant is the utter collapse of the Labour Party (PvdA), the party of social democrats that was decimated from 38 to a pathetic nine seats in the 150-member parliament. Social democrats are crumbling across Europe. Post World War II, they were instrumental in Europe’s rise from the ashes of destruction to an economic powerhouse, ensuring workers’ rights, social equality, quality life and the rise of the middle class.

But now, in most European countries, the social democrats are being mauled. Prof Franck Orban, who specialises in European populism and extremism, told THE WEEK: “The weakening of the traditional left and socialist parties is dramatic. We are witnessing a recomposition of the political scene in Europe, which until now had been dominated by twin political pillars—liberals and conservatives. The decreasing appeal of the socialists and the rise of small parties is a historic shift.”

So why are European voters defecting from the traditional left and socialist parties? The losers of globalisation and liberalisation feel these parties have betrayed their interests. Ordinary workers have not benefited from the visible prosperity that has been hogged by a thin slice of elite, educated, high-skilled workforce. Downsizing, offshoring, cost cutting, austerity measures, mergers, smart machines and robotics have all resulted in dislocation and job losses. A whole way of life is vanishing. Youngsters get temporary jobs, so they do not have steady incomes or job security. They cannot plan for the future. Their parents’ middle class dream is now a mirage. A well-functioning market economy cum social welfare model is what they yearn for.

So who are replacing the social democrats? Orban notes that far-right populism is matched by far-left populism, resulting in the radicalisation of the mainstream middle. Alt (alternative) right vs alt left—that is the Bernie Sanders vs Donald Trump narrative across Europe. Dutch Labour Party leader Lodewijk Asscher admitted the result was “unbelievably disappointing. Voters have put their trust in another party.”

And that party is the GreenLeft, which emerged as the single biggest Dutch winner, literally crawling out of the woodwork to win 14 seats from its previous four seats.

The traditional left and Labour Party’s approach to solving modern-day problems is outdated and bureaucratic, highlighting the utter bankruptcy of new ideas. The perception that foreign workers are stealing local jobs is very real, be it in Britain or in the Netherlands. But Labour Party’s solution to this problem is introducing Cold War-era work permits, regional quotas and other schemes requiring government control that are archaic and unenforceable. It symbolises a bunkering, shut-down mentality that youngsters find “so yesterday”.

Far more appealing is the green or radical left’s demand for stronger internal measures such as promoting local employment, training and protecting workers. Jingoism, bigotry and bashing of foreign workers are distasteful to the idealistic but grounded millennials, who form the core of the GreenLeft vote bank. The GreenLeft is led by the handsome 30-year-old Jesse Klaver, the “rock star” of Dutch politics. He could well be the kingmaker in the ongoing talks to form a coalition government. (These talks could drag on for months, but as far as a joyous Europe is concerned, the government formation in the Netherlands is now a matter of minor detail.)

Green parties are surging in Europe, notably in Germany and Scandinavia. Environment, social security, education and national values are the issues that matter most to the green left. Buoyed by the Dutch GreenLeft’s performance, British Green Party leader Jonathan Bartley tweeted the Dutch outcome may be “a taste of things to come” across Europe. 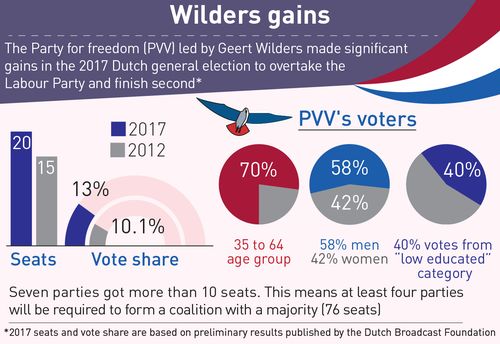 So relieved are European leaders by the Dutch verdict that many resort to hyperbole. Denis MacShane, Britain’s former minister of Europe in the Labour government, predicted that it would ensure “the end of populism in Europe”. “The Dutch result and the probable new president of France signals an end to Brexit-Trump nationalist populism with its nasty anti-immigration scapegoating,” he wrote in The Independent. “Such politics will not disappear and it will infect mainstream parties… but democracies are not yet ready to surrender to their extremes.”

Not so fast, said Dutch political strategist Hans Anker. “The death of populism is vastly exaggerated,” he quipped. Agreed Orban: “The populist tsunami is not over. Henceforth, there will be a more balanced appraisal of its real weight in European politics.”

Job losses, income disparity and the feeling of being swamped by immigrants remain potent issues. While everyone praises Rutte for rescuing Europe from the clutches of populism, it must not be forgotten that his party actually won eight seats less than it did in 2012; and Wilders’s won five seats more than in 2012. Wilders’s real defeat is that he failed to win the 41 seats pollsters predicted at the height of his popularity. As Wilders warns, “Rutte is far from rid of me!”

Notwithstanding the Dutch victory, threats still lurk in Europe, as alt left and alt right, anti-establishment and Eurosceptic parties gain traction. Many Europeans resent the EU’s domination and its “theft” of their national sovereignty.

The threat of EU destabilisation began with Grexit. The Greek economic distress is a combination of national mismanagement and unrelenting pressures exerted by EU institutions led by Germany, fabled for its Teutonic efficiency and discipline, in stark contrast to the laid-back Mediterranean approach.

The need to unify, rebuild and revitalise Europe is paramount. Brexit and the Trump victory shook the EU to its very foundations. The Dutch verdict throws a much-needed lifeline. Now the ball is firmly in the court of European leaders, who must, as Juncker says, “put their heads together for a stronger Europe”.