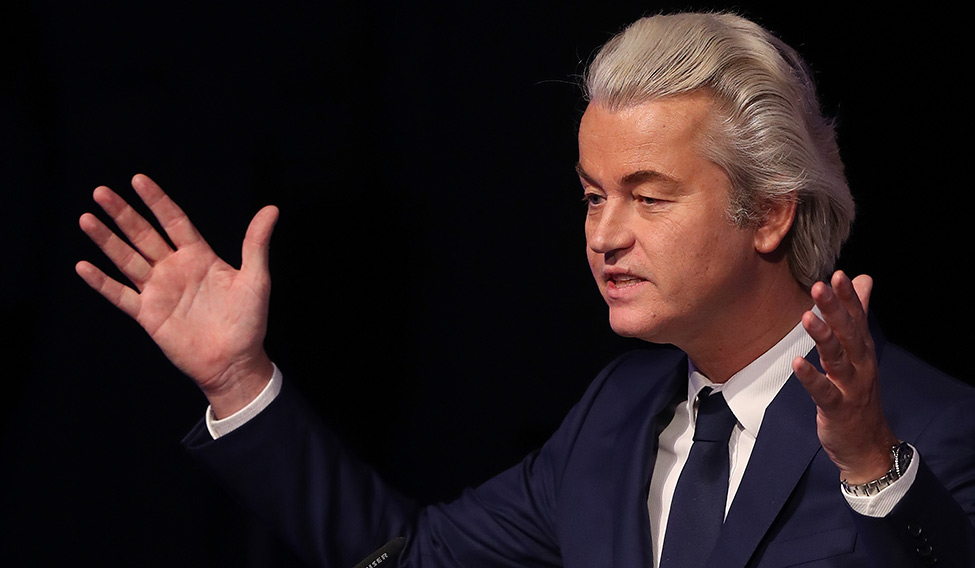 Geert Wilders’s fate is the first litmus test for Trump populism. Dutch elections will indicate whether the tide of far right populism rises or retreats across Europe

If you think one Donald Trump is one too many, then welcome to the Netherlands, where a far-right populist named Geert Wilders has risen as “the challenger”. The “Dutch Trump” says pretty much the same things as the American president. But he is a bigger headache, not just for the Netherlands, but for Europe. He is Trump and Brexit combined.

Netherlands will go to polls on March 15. Wilders’ Party for Freedom (PVV) is predicted to return to Parliament as the largest party. The size of Wilders’s victory will determine two questions. Is Nexit next? How will Wilders’ performance impact the rising tide of right-wing populism raging across Europe, especially in the forthcoming French and German elections? The Netherlands elections are critical because the Trump brand of populism will be tested for the first time in the West, after its stunning debut in the United States.

How did Wilders, a nondescript health insurance worker-turned-local politician from the Dutch hinterlands, get this far? By indulging in tirades against Muslims, immigrants and the European Union. He is inflammatory. He is divisive. He is so "Trump". Far right populists seem to share the same DNA.
Wilders’ comments are offensive. But they strike a chord among the resentful core ethnic White Dutch, similar to the segment of American voters drawn to Trump.

Wilders says he has nothing against Muslims, but abhors their religion: “Islam is not a religion. It’s an ideology, the ideology of a retarded culture.” He describes the Koran as “an inspiration for intolerance, murder and terror”. He wants it banned like Hitler’s Mein Kampf.

He also wants fewer immigrants, especially the Muslim Moroccans who form 2 per cent of the Netherlands’ 17 million people. Labelling them ‘scum’, he says many are criminals. Reminds you of Trump’s rant against Mexicans as rapists and drug dealers.

If he wins, Wilders promises to close Dutch borders, halt Muslim immigration, ban the Koran, shut down mosques and Islamic schools. A total de-Islamification of the Netherlands. Unconstitutional? “The constitution is not set in stone” retorts Wilders.

As in the US and Britain, an insecure public’s sense of disempowerment and frustration with life is growing in the Netherlands and the rest of Europe. Elites, immigrants and globalisation are blamed for this existential crisis that has seen job losses, low wages, crumbling cities and hollowed-out local communities.

Wilders and Trump present a bit of a chicken-and-egg problem. Trump won first but he echoes the Dutchman. Last year, Wilders said he will stop Muslim immigration. The Muslim travel ban was one of Trump’s first executive orders. When courts convicted him last December for inciting discrimination against Moroccans, Wilders attacked the judges: “No one trusts you anymore!”. Trump does the same. When the travel ban was struck down by court, Trump tweeted “Just cannot believe a judge would put our country in such peril. If something happens, blame him and court system.” Wilders calls his country “sick”. A month later Trump talks of “carnage” in America.

Demonising immigrants, Islamophobia, vitriolic rhetoric and fear-mongering help to consolidate the frustrated sections of the Dutch vote bank. Painting absurd images of Dutch cities turning into a new Mecca, Wilders says, “Take a look down the street and see where this is going. You no longer feel like you are living in your country. There is a battle going on and we have to defend ourselves. Before you know it, there will be more mosques than churches.”
Most Dutch don’t bother to go to church. Many churches have been converted into music halls, restaurants, dormitories, even cycle parks. But, as in every country where stereotyping of minorities occurs, so too in Netherlands where the Moroccans are perceived as “illiterate, wife-beaters, drug dealers and welfare-robbers”. A statistic that has gone viral is a Dutch interior ministry finding: 40 per cent of Moroccan immigrants in the Netherlands between the ages of 12 and 24 have committed a crime. A less viral but arguably connected statistic is that 40 per cent of Moroccan youth are unemployed. Does this reflect poorly on immigrants or the failure of Dutch integration policies?

Amsterdam is one of the most vibrant, multicultural cities in the world. Along with tall, white Dutch, you find Turks, Surinamese, Antilles, Moroccans and Indonesians working, living, loving side by side. Delicious smells of Turkish kebabs and Surinam Roti rolls waft in the air. You could easily mistake “fa waka” as the Dutch word for “what’s up”—so mainstream is this Suriname slang. Languages, cuisine, religions, entertainment all thrive in joyful, peaceful, harmonious co-existence.

When you first visit a country, it is either bewildering or exotic. But the more you live in a country, the more you become aware of the fissures, tensions, flaws, warts and contradictions that lurk beneath the surface. It is the same in every country. And Netherlands is no exception.

Look deeply and you will see the cracks even in Amsterdam. But 100km south in Den Bosch, you don’t even have to look closely. The fissures ravage the surface—the gritty streets, the grimy walls, the sullen faces. Here, Moroccans constitute 10 per cent of the population and nearly half of them have had run-ins with the law. It is the same in other immigrant-populated areas like Zeist or Gouda, Veenendaal or Amersfoort. First-generation immigrants from Turkey and Morocco came in as low-paid workers in the 1970s and 80s and some of their children, though born in the Netherlands, failed to integrate, speaking poor Dutch, belonging neither to their homeland nor to their adopted land. Studies show that the “low” social capital (meaning social relations and networks) make them vulnerable to dropping out of schools and criminal behaviour. 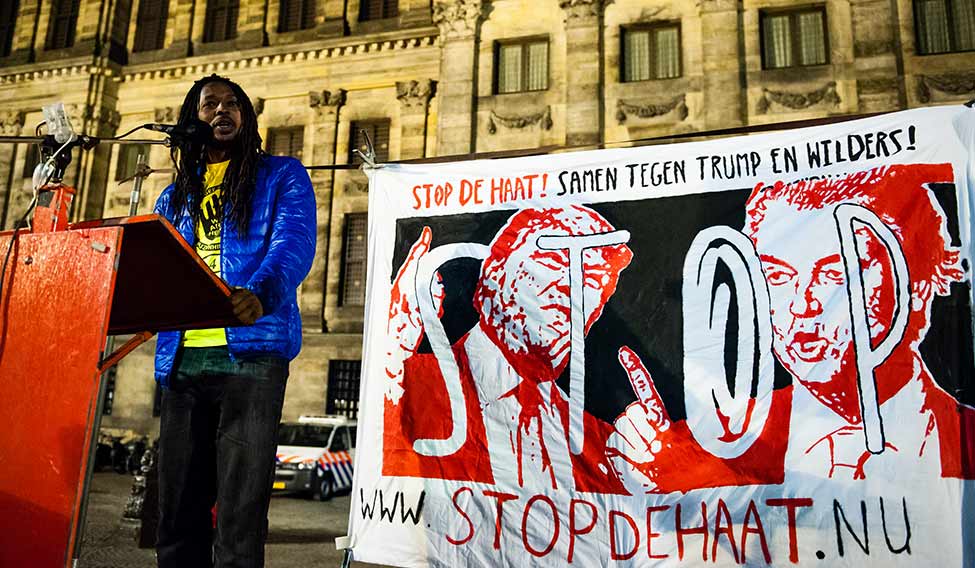 Banner of revolt: A protest in Amsterdam against Trump and Wilders | Getty Images

Interestingly, while it cannot be said that Indian and Chinese immigrants integrate well with the host white mainstream, both communities do well economically and have low crime rates. The reason is “social capital”. The Chinese and Indians are educated, close-knit communities, taking care of and controlling their members.

The Dutch, like other Europeans, have tried to integrate their immigrants. The consequences have been pretty much the same all across Europe. Far from a multicultural mosaic, the result is ghettoisation. This has led to increased levels of radicalisation, joblessness, crime and stigmatisation of immigrant youth. Says Dutch immigrant, Adam Nassoum, an information science student: “What you have to understand is that if I apply for a job with my surname, I am more likely to get turned down. I am declined from some clubs who literally have a “no Moroccan” policy. People always hold on to their bags a little tighter if they have walk past me. I am treated like an uneducated germ, a parasite and it would make a lot of racists happier if I wasn’t “infecting” this country.”

Racism and class snobbery, like all other forms of prejudice, run deep in all communities. For instance, among the Moroccans, inter-marriage is taboo between Berbers and Arabs.

For years, the Dutch authorities watched their multicultural society failing, with rising levels of immigrant abuse, misuse and crime. Yet, ‘political correctness’ stood in the way of confronting and tackling these problems. This is rooted in the guilt resulting from the extermination of Dutch Jews during Nazi occupation in World War II. Every nation struggles with the demons of the past. Go back a few hundred years and the Netherlands was the theatre of the absurd ‘’Tulip Mania’’. The excesses that led to the Great Depression in 1929 or the 2008 financial crises are child play compared to the unbridled greed, gambling and stupidity in 17th century Holland when a single tulip cost as much as 12 acres of land. Families, businesses and whole communities were ruined when the speculative bubble imploded.

Arguably, Nazi past and Tulip crisis account for Dutch political correctness and thrift. Going Dutch means paying your own bill. The Dutch are frugal, liberal and peace loving, sharing the European disdain for security apparatus and barricades. A decade ago, street assassinations of Islam critics, politician Pin Fortuyn and filmmaker Theo Van Gogh, caused widespread horror. Many affluent Dutch voted with their feet, emigrating to Germany and Belgium. The cost of living was also much cheaper there than in their own densely populated cities. But fewer Dutch are leaving now as Germany and Belgium battle immigration influx and violence.

Wilders shattered political correctness in a context where even discreet breaching invited ostracism—another Trump trait. “I say what the politically correct elite do not want to hear,” Wilders taunts. Attacking the veil as “a woman-humiliating Islamic symbol”, Wilders says, “It is not acceptable for people to completely cover themselves on the street. It threatens public order and security. Plus, it is a terrifying sight." The pro-Israel Wilders believes Islam is a threat to the free and open Western Way of Life. Fearing assassination threats from ihadists, Wilders relies on social media and online election campaigns.

Like Barack Obama, the current Dutch Prime Minister Mark Rutte of the liberal People’s Party for Freedom and Democracy (VVD), has presided over a period of sustained economic growth. And yet people are fed up, hankering for change.
So will Wilders repeat the Trump triumph? And if he does, will it turbo charge far right leader Marine Le Pen in the French elections in May and the AfD in Germany in the autumn? Will EU unravel? Will it spur far right movements in Spain, Italy, Greece, Poland, Hungary, Scandinavia?

Opinion polls like weather forecasts are hardly credible. But, if some polls are to be believed, Wilders's stab at becoming the next prime minister has, in fact, dimmed in the past six weeks. The reason is Brexit confusion in Britain and White House chaos after the Trump presidency. Populism as rhetoric is powerfully appealing. Populism as policy, not so much.

Traditionally, the Dutch opt for coalitions. None of the major parties get more than 30 seats in the 150-member Parliament. There are indications that even if Wilders’s PVV is the single largest party, he will be unable to lure coalition partners. But if his electoral gains are huge, it might become democratically impossible to deny the crown to the challenger.

* In 2007 he proposed the Quran be banned in the Netherlands. In 2008 he produced Fitna (Strife), a short film that showed graphic images of terror attacks along with passages from the Quran

* Though the Dutch court charged him with inciting hatred towards Muslims, he was acquitted after a two-year trial

* Wilders was found guilty of inciting discrimination and insulting a group (Moroccans) in December 2016, after his second ‘hate speech’ trial

* No sentence was imposed; the judges ruled that the conviction was punishment enough