Mother of all challenges

Angela Merkel, who won a fourth term as chancellor despite a steep drop in support and the rise of the far right, must reach out to those who resent immigration and feel left behind by modern-day capitalism

Smouldering discontent surges in different ways. In Germany, for the first time in half a century, millions of voters catapulted the far right Alternative for Germany (AfD) into the Bundestag, the lower house of parliament. The ultra-nationalist AfD finished third, but its historic leap stole the headlines from Angela Merkel who won a record fourth term as chancellor. “This is a wake-up call that rings around the world,” says political analyst Niko Switek.

The AfD’s anti-Muslim, anti-immigration populism attracts global attention. It wants to ban burqas and the Muslim call for prayer, and demands stricter border controls. Its members unapologetically glorify Germany’s Nazi past. The feisty 76-year-old AfD leader Alexander Gauland says Islam does not belong in Germany. Liberals are horrified because it reminds them of Adolf Hitler’s views on Jews. Just like Donald Trump’s “lock her up” chant to punish Hillary Clinton, Gauland vows to “hunt” Merkel down and punish her for allowing Muslim migrants to flood Germany. Says Bastian Brauns, editor of Zeit Online, “Such harsh rhetoric is unprecedented in post-war Germany.”

The AfD is a big winner, but Merkel’s Christian Democratic Union (CDU) is still the biggest, although its vote share came down from 41 per cent to 33 per cent. Beating anti-incumbency even after 12 years is no small achievement, but a sombre Merkel is practical, not cheerful. “We will do a thorough analysis to understand the concerns, anxieties and worries of the AfD voters and win them back,” she says.

Grimmer than the CDU are the Social Democrats (SPD), coming second with 20.5 per cent votes, the worst showing since its founding in 1949. “A difficult and bitter result,” says SPD leader Martin Schulz. He was Merkel’s main challenger, but his campaign flopped as his slogan “es izt zeit (it is time)” for “social justice” did not sound credible. As junior partner in the grand coalition led by Merkel’s conservative CDU for the past four years, the SPD is seen by its labour base as having sold out. The party says it will sit in the opposition.

So Merkel needs to cobble together a new coalition. The pro-business Free Democrats (FDP) is a natural ally, but to garner a majority in the Bundestag, she may approach the anti-business Green Party as well. “Forming the coalition is easier than keeping it together,” quips journalist Nikolaus Blome of Bild, Germany’s biggest newspaper.

This election outcome fractures ‘business as usual’ in a country that values consensus and compromise. Since World War II, Germany was ruled either by the CDU or the SPD and sometimes both together. Stability achieved through consensual politics helped it emerge from the ashes of devastation into a global economic powerhouse. But the election results have revealed the shifting sands lurking beneath the veneer of economic, social and political stability. Never before has the Bundestag been so fragmented, mirroring the worldwide slump of mainstream centrist parties. The emergence of four diverse, fractious political groups ranging from the extreme left to the far right, together commanding 40 per cent of the votes, will test Germany’s fabled stability and consensus-driven politics.

Like a formula car, the AfD raced from zero to 94 seats in the Bundestag, but there is zero chance of it being in a ruling coalition. Labelled ‘neo-Nazis’, all parties abhor the AfD. But the AfD’s 38-year-old lesbian leader Alice Weidel says triumphantly, “We have arrived and we are here to stay.”

Formed in 2013, the AfD’s initial platform as an anti-euro party failed to gain traction. But in the wake of Europe’s refugee crisis, it reinvented itself as a xenophobic, Islamophobic party. In addition to asylum-seekers, there are three million Turkish immigrants in Germany, who are mostly Muslims. The AfD finds maximum support among the East Germans, who have not integrated fully after the German reunification. Says Lukas Krauczun, a former Merkel supporter, “Our culture, our race, our way of life is under threat. We want our country back.”

Ironically, it was Merkel who unwittingly opened the doors of the Bundestag for the AfD. In 2015, she welcomed Syrian refugees to Germany calling the situation a “humanitarian emergency”. Initially, this was popular among Germans, but the move backfired after one million refugees flooded Germany alone. Abetted by human smugglers, Muslim refugees poured in from the Middle East, Asia and Africa, overwhelming European municipalities. Local citizens turned hostile when faced with crime, squalor, migrant misbehaviour and terrorism. And, Merkel’s “Mother Europe” image was shattered as everybody blamed her.

Undeterred, Merkel patiently and cleverly managed the crisis through external deals preventing refugees leaving for Europe and tightening internal rules, resulting in a dramatic reduction of asylum-seekers this summer. So even though the refugee issue completely dominated the elections, she managed to win. But so did the AfD, which, despite being tainted by scandals and power struggles, benefitted from the protest vote.

Merkel has her critics, but she still commands support, even from the youth. Says Hannah Müller, a part of the ‘Merkel generation’ (first-time voters who have grown up with Merkel as chancellor), “She is a familiar, comforting presence for as long as I can remember.” A popular youth refrain is, “We can chill because Mutti (mom) is taking care of business.” Symbolising maturity, caution and predictability, Merkel is the polar opposite of Trump. Says Christian Odendahl, Berlin representative of the think tank Centre for European Reform, “The political situation in Europe’s neighbourhood and the world is scary enough that Germans want a trusted and experienced leader.”

Merkel reminds you of former prime minister P.V. Narasimha Rao who famously said that not taking a decision was also a decision. Like google, ‘merkeln’ is now used as a verb in German, which means not rushing into decisions. It is not that Merkel is indecisive, but her “wir schaffen das (we will manage this)” style involves refusing to react to news cycles, allowing time for events to unfold and marshalling evidence from experts before deciding.

As a Lutheran pastor’s daughter, Merkel is more ethical than ideological, and her early life in communist East Germany makes her distrust propaganda, grand plans, surveillance and border controls. Her success lies in her flexibility. Unchained by dogma, she co-opts opposition policies to find middle ground or to correct course, like adopting her SPD predecessor Gerhard’s Schroder’s labour reforms, the Green Party’s anti-nuclear policy, or the AfD’s stricter immigration measures. She will continue to do so, conceding that migrant inflows arouse fears, identity issues and security concerns among Germans.

The rise of the AfD exposes another chink in the German armour. Germany is Europe’s best economy with booming exports, record employment, and trade and budget surpluses. But economic growth has not been inclusive. Deindustrialisation and the closure of mines and steel factories have made the Ruhr valley similar to the American rust belt. “GDP growth and high employment rate mask millions of Germans living on doles and minimum wages. They feel left out,” says political scientist Kate Hansen Bundt.

In this situation, it is easy to scapegoat immigrants. A study by Jürgen Friedrichs and John O’Loughlin has shown that right-wing parties “typically gain votes in areas where conflicts for scarce resources such as jobs and housing are aggravated.” Economically distressed victims turn to newcomers and extreme left or right parties, which explains the rise of the AfD and the extreme leftist Die Linke. This anti-establishment mood is global, resulting in Brexit and the rise of leaders like Emmanuel Macron in France, Donald Trump and Bernie Sanders in the US, and populist parties like the Podemos in Spain and the five-star movement in Italy.

Established businesses are also under threat. The engine of German economy, the car industry that supports eight lakh jobs, is tarred by scandals and market manipulation. Tesla’s stellar performance signals that the future belongs to nonpolluting, easy-to-maintain electric vehicles. But German carmakers are implicated in ‘dieselgate’—a scandal caused by the use of cheating software to under-report diesel emissions. Public fury mounted as toxic smog engulfed cities. Says emission expert Axel Friedrich of the German Environment Aid, “Seventy per cent of air pollution problems in cities are from diesel emissions.’’ All mainstream politicians are seen as too close to the ‘car cartel’, which explains the popularity of the Green Party.

Thanks to the economic recovery, synchronised election cycles and pro-European leaders in Germany and France—the EU’s twin engines—there are three good years to implement the much needed reforms to unify, streamline and strengthen the EU. The goals are clear, but the route is contentious. The main hurdle is that the EU is not a monolithic, homogenous entity. Governments in eastern countries like Hungary and Poland have turned illiberal. Russia is a divisive issue within the bloc. Economic performance varies between the Eurozone’s strong, fiscally-disciplined northern states like Germany and the Netherlands, and weaker southern states like Greece, Portugal, Italy and Spain, burdened by bad loans, debts and deficits. As José Manuel Barroso, former president of the European Commission, says, “Tensions have reemerged between the EU’s centre and periphery, between north and south, east and west, creditors and debtors, and richer and poorer members. There is a feeling of a loss of sovereignty, fairness and equity.”

This contributes to the rise of fiery nationalism across Europe, now even in Germany. More than new laws and institutional changes in the EU, Merkel knows that she must address discontent by delivering practical benefits, especially to those who resent immigration and feel left behind by modern-day capitalism. Extinguishing fires is her destiny. 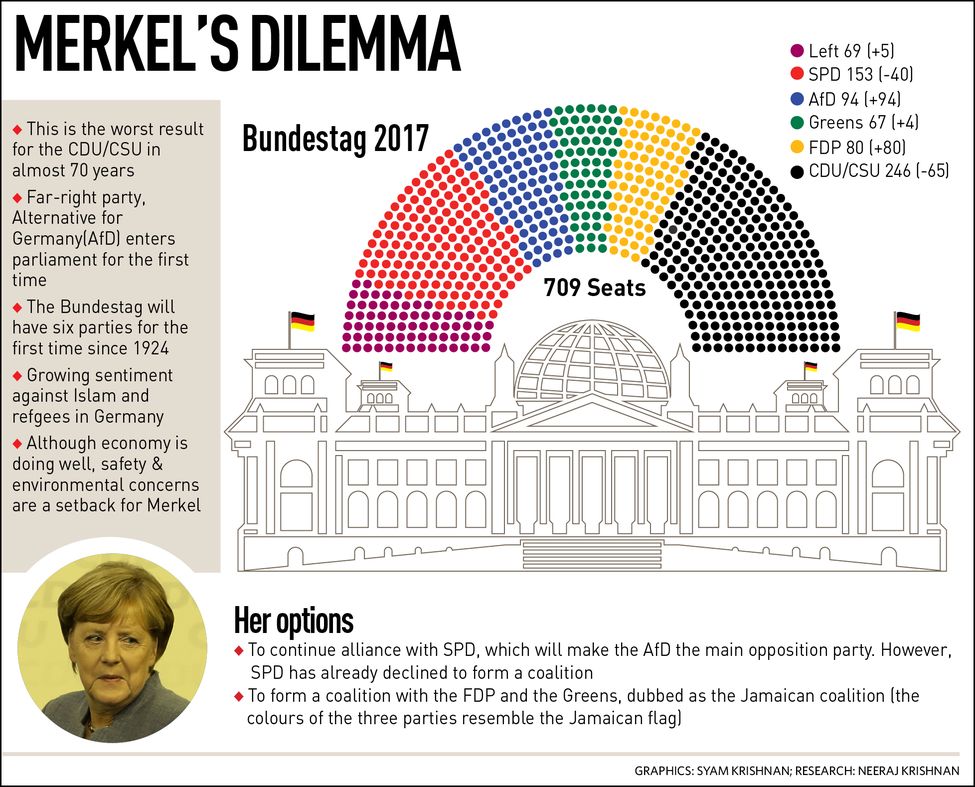