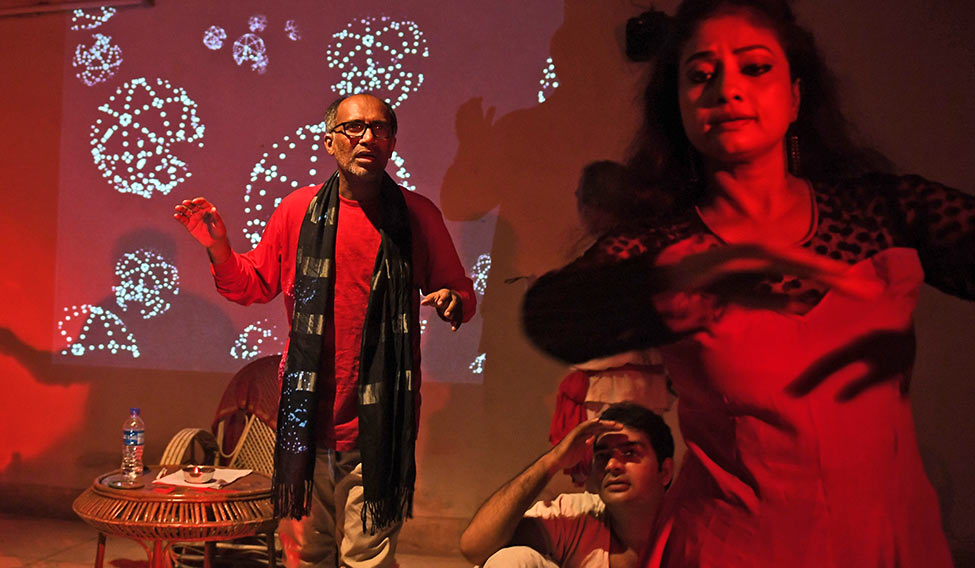 Colourful convergence: Janardan Ghosh has combined multimedia, music and lighting for his new form of storytelling in Kolkata | Salil Bera

Unlike some sort of a structure that a general story takes, theatre person, professor and now storyteller, Janardan Ghosh is experimenting with a non-linear form that he calls ‘katha koli’. He has used the body, multimedia, music and lighting to come up with a storytelling work on feminine energy. It was performed recently at the Proscenium Art Centre, a hard-to-locate culture centre on Ripon Street in Kolkata.

Performed in English and Bengali, the story, borrowed from a Bengali folktale, Digambar, is about a man trying to understand the changes he sees in his daughter growing up. Woman power is at the heart of experimental storytelling, too, it seems. Ghosh’s work has four characters, including him as the main narrator, exploring the story built around the goddess Kali using a screen projector, mood lighting, live music, vocal effects and costumes. “The idea is to experiment with how other mediums can contribute to our storytelling performance. It is still a work in progress. I don’t like rigid, structured performances. We might change elements as we go along,” he says. Before anyone calls it theatre, Ghosh is quick to add, there is a narrator who is central to the performance and hence the form retains its storytelling character.

The immersive, intense performance ended with a bowl of colourful Gems passed around with a hand mirror—the audience ate the sweet and then looked at their discoloured (or coloured) tongue in the mirror. Kali or the feminine energy in all beings. It seems an obvious choice. “Well, being a Bengali, living in West Bengal, Kali is a dominating goddess in our cultural world. It is not about Kali as a woman but as energy. We tried to explore that energy in everyday life, legends, mythology, popular culture, where, for example, Lady Gaga with how she comes across or Uma Thurman who could be Kali in the film Kill Bill—how the feminine energy is cultivated within us and around us,” he explains.

Eco-feminism theories have been a major anchor for Ghosh, who finds the idea of disruption interesting. “Kali liberates you,” he says. “She is the destroyer mother, and Shiva is a figure of calm, stillness for her. This storytelling is about base performance. It is not melody all the time, there is violence in the music effects, too.”

Ghosh is also looking to question gender codes at a time when the subject is big everywhere. “In a contemporary situation, the mind and body are colonised where logic wins over emotion,” he says. “We looked at Tagore’s women, who were seen as supporters of men. We challenge that aspect of his legacy. All stories in katha koli are to do with feminine energy, which exists in every person. If a man relates to feminine energy, it doesn’t mean he is effeminate. We work by bringing up storylines and circulate to each other. I call us ‘living storytellers’; our work is organic.”

Ghosh, who hails from Dhanbad, moved to Kolkata three decades ago after a degree in engineering that “choked” him. He then studied literature in the city and got into theatre. Now he is moving into storytelling with his charmingly named genre, katha koli. “The word means ‘word-bud’ in Bengali. The idea is that a word blooms when we use it to tell a story,” he explains.

How does it link to his background in theatre? “Storytelling is the source of theatre,” he says. “There is a truth to storytelling which is not [there] in theatre. We want to go back to the origin. A storyteller never wants to be the character he is narrating.”

Where does he plan to take it? “Scotland has a big storytelling culture. We want to plan a festival based on ‘grandma’s stories’, which is lacking here today. In Europe and west America, storytelling has been big,” he says. “In India, we don’t need to institutionalise it; it is a home product for us! My personal spiritual quest is to reach a higher level of human experience through a storytelling performance. I wish to be in a state of trance—that would be my last story.”

Kali, the unconventional Hindu goddess, has fascinated many. Emily Hennessey, a storyteller from the United Kingdom, who has trained under veteran Indian storyteller Vayu Naidu, collaborated with Indian sitar player Sheema Mukherjee earlier this year to perform a piece on Kali in her various avatars as the ‘demon-slayer, lifesaver, supreme-mother, destruction-dancer’ in Brighton. Hennessey has also worked with Pandavani performer Ritu Verma.