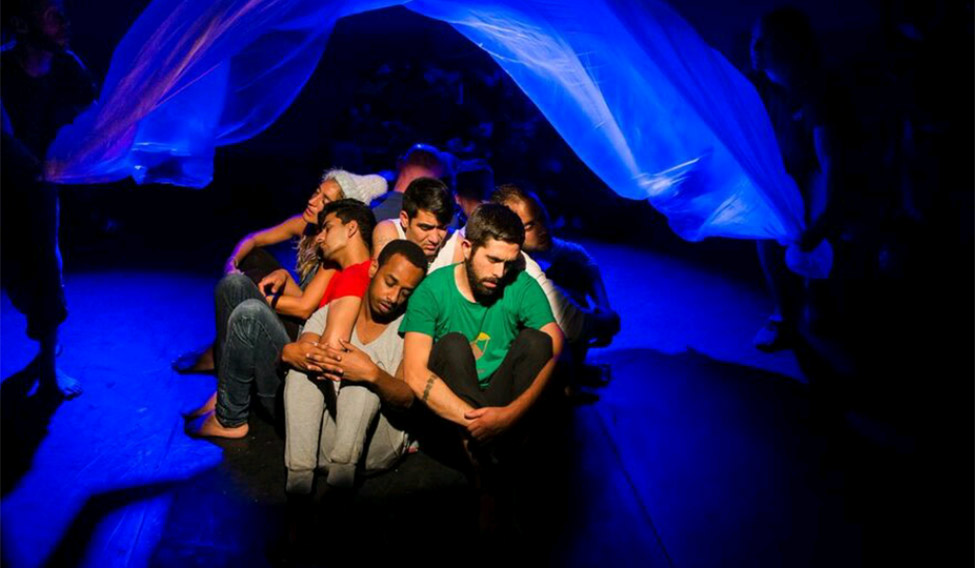 Sink or swim: A still from the play | Jose Farina

The Calais Jungle was a refugee camp situated just outside the Port of Calais in France. It used to be the main ferry crossing point between France and England before the camp was dismantled in October 2016 by French authorities. More than 10,000 refugees from Somalia, Syria, Iraq, Yemen and Sudan used to live there. Several asylum seekers were drowned in the channel or killed by other means while trying to illegally cross over to the UK.

I confess I did not know any of this until I went to watch Borderline, a satirical play on life in the Calais Jungle staged by European and refugee performers at the 10th edition of the International Theatre Festival of Kerala in Thrissur. The incidents in the play are based on the refugees’ own experiences living in the Jungle, except that they’re told through a comic filter. The absurdities of their lives at the camp are brought out in an almost whimsical way. So, there are scenes of them queuing up to get donations. They peer curiously into the bag, only to be handed out absolutely useless things like rattles, toys and coats too small for them. There is an Italian trying to teach the refugees English and a kung fu master taking self-defence classes. There is the British volunteer who’s enthralled with Syrians and keeps searching the camp to find one. Finally, when a Syrian refugee majestically walks on to the stage, the volunteer is smitten. “Oh, a Syrian,” she breathes, the way one might be awestruck by an exotic pet at a pet shop.

Sophie Besse, the director of the play, says she got the idea after doing several workshops at the Jungle. She started going there from August 2015 for several days every month as a volunteer. Initially, she used to help out at the kitchen in the big warehouse of the camp, where almost 2,000 meals were prepared a day. “At first, it was a lot of peeling onions and things like that,” she says. “Then I started doing writing, clay and drama workshops. I realised that a lot of people there were very talented musicians, dancers and actors eager to express themselves.”

One might easily be tempted to trivialise what these refugees went through while watching the play, lulled into the misconception that they couldn’t have suffered so much if they can be so vivacious now. The pain has been camouflaged—it’s mostly through indirect inference that you’re given a glimpse of it—but it’s there all the same.

“In 2011, when the freedom movement started in Syria, I participated in peaceful protests for more rights and representation in the Parliament,” says Baraa Halabieh, the Syrian refugee who is the subject of the British volunteer’s fancy in the play. “I was kidnapped by the military secret service. Because there’s a lot of corruption in Syria, I paid money to get released. In 2014, I decided to leave the country because most of my friends who had demonstrated with me had been arrested. I lived in Istanbul for a year. I crossed from Turkey to Greece in a rudder boat with 55 others. From Greece, we took buses and trains to France. It was when I arrived in France that I learnt that the only way to go to England was via the Calais Jungle. I remember asking people where this jungle was and when I saw it, I was shocked. There were all these makeshift shelters in the dirtiest surroundings. People say we don’t have human rights in third world countries. Where were the human rights there? It’s like they only applied to Europeans and not to us refugees.”

A rare moment of sobriety in the play is when a refugee dies and, at his funeral, another sings Abba’s ‘I Have a Dream’. The words of the song seem to be so poignantly fitting to the refugees in the play.

I have a dream… A song to sing… To help me cope… With everything… I believe in angels… Something good in everything I see.