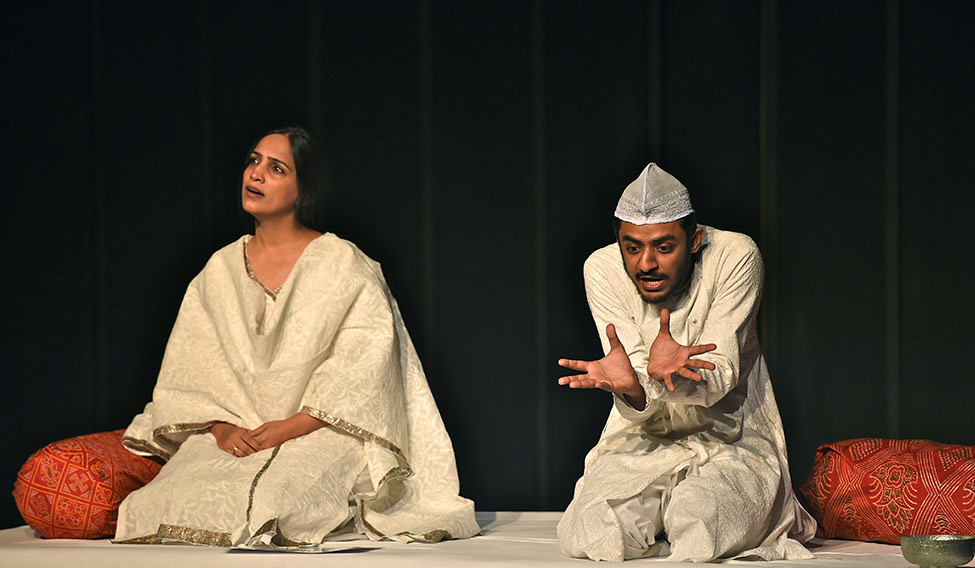 It is a warm July evening. The largest auditorium in Delhi’s India Habitat Centre starts to fill up with adults and children. Growing up, many would have read the story, while for the younger ones, this would be an introduction to a 20th century French classic—The Little Prince by author-aviator Antoine de Saint-Exupéry, which was first published in 1943.

Shortly, a young man and woman, both dressed in flowing white, enter and take their positions on the stage. Expect not a Saturday of reading or a theatrical performance; it is a storytelling session, with a twist. The popular story of the little boy from an asteroid, long adapted in several languages and formats worldwide, is being rendered in the ‘lost art form of Urdu storytelling’ called Dastangoi, premiering as Dastan Little Prince Ki.

An uninterrupted 80-minute telling of this timeless tale of friendship and loss ensues in Hindi, Urdu and some English. The storytellers slip in occasional cheeky comments on the prevailing Indian political situation that evoke titters among the older audience, while a repetitive funny rhyme about ‘how weird grown-ups can be’ hooks in the younger ones. The duo effectively employ facial expressions, voice modulation to punctuate the tale, occasionally sipping water from dainty silver bowls kept next to them, sitting in one position—their feet curled under them—throughout the performance.

The lively male narrator, the 28-year-old Ankit Chadha, is one of the youngest dastangos in the country. A Delhi resident trained in street theatre during college days, Chadha started out at age 22, acquiring “informal training” from his ustad, historian Mahmood Farooqui, who had taken the baton from his uncle and poet-critic Shamsur Rahman Faruqi, who had begun the modern revival in 2005.

Dastangoi, composed of two Persian words, dastan (story) and goi (telling), is about the dastango or teller whose artistic tool is his voice. It was popular between the 16th and 19th centuries in Delhi and Uttar Pradesh, slowly ebbing away as the last known dastango Mir Baqar Ali died in 1928.

Chadha, who gave up marketing to pursue his writerly calling, is clear this is different from theatre. “I didn’t want to be part of a group where lights and costumes are involved. The focus was the story I wanted to tell with the form becoming essential to what I want to say. The minimalism of the form attracted me,” he says, over tea at a popular cafe in Khan Market the next day. Chadha has worked with ancient stories of Amir Hamza (uncle of the Prophet Muhammad) and poet Kabir, and has also written and performed a satirical piece on today’s mobile generation, likening them to carriers of stories.

“Dastan from the Hamza tradition consists of four elements: magic, trickery, romance and warfare. My love for the past acknowledges people before us who have given us rich traditions, while my experimental side wants to take from what we have to go forward, like using the form to comment on the corporate culture,” he says.

How does he look at making storytelling sustainable? “I try to follow a patronage model,” he says, not shy to call art a form of entrepreneurship. “Art can survive if the artist survives. Find a patron who respects your art and has the will to invest in your work. Initially it was a struggle. Today I can pay my bills,” explains Chadha, who has been backed by organisations like the Aga Khan Trust for Culture.

For someone whose natural tongue isn’t Urdu, learning the language and its gestural subtleties came from having conversations at Farooqui’s home. How does he look at being a non-Muslim storyteller of an old Urdu form? “Some say, oh, this is not Islamic. It doesn’t matter what people say. Ethnically I am a Punjabi, born and brought up in a megacity like Delhi. Close people have pointed out that you are dressed like an 18th century Muslim, but those are their labels. For the last two years as an act of resistance, I have been saying Urdu is a cool language and young people like us find a sweetness in it. Urdu is not just a language of my performance but it is my language now.”

How has his art changed him? “We have forgotten the act of listening at macro and micro levels—whether that’s manifested as wars in the world or lack of warmth in families. I spent eight months researching, collecting stories that I can narrate in one hour. Telling stories has made me a better listener. Storytelling engages with the audience. As you listen, your mind converts that into images based on your experience and imagination. People are hungry for good stories today.”

What’s next? His new work will draw from pastoral cultures, he says, as well as experiments with the musical narrative, examining the relationship between poet Amir Khusrao and his master, Hazrat Nizamuddin Auliya.

Dastangoi—the term comes from ‘to tell a tale’ in Persian—is an Urdu oral storytelling form from the 16th century. It was popular in Delhi and Lucknow, but died out with its last teller Mir Baqar Ali in 1928. It saw a revival over a decade ago, thanks to poet-critic Shamsur Rahman Faruqi and his nephew, the historian Mahmood Farooqui. Magic and war used to be the predominant themes, but the form drew from diverse sources such as Panchatantra. In modern times, it has even told tales of partition and sedition. There are no props, music or fancy costumes, with the narrator considered to be the centre-piece. The audience is expected to respond with only a ‘wah’ instead of a clap if they like a narration.