The RSS is gaining in Bengal, thanks to Mamata 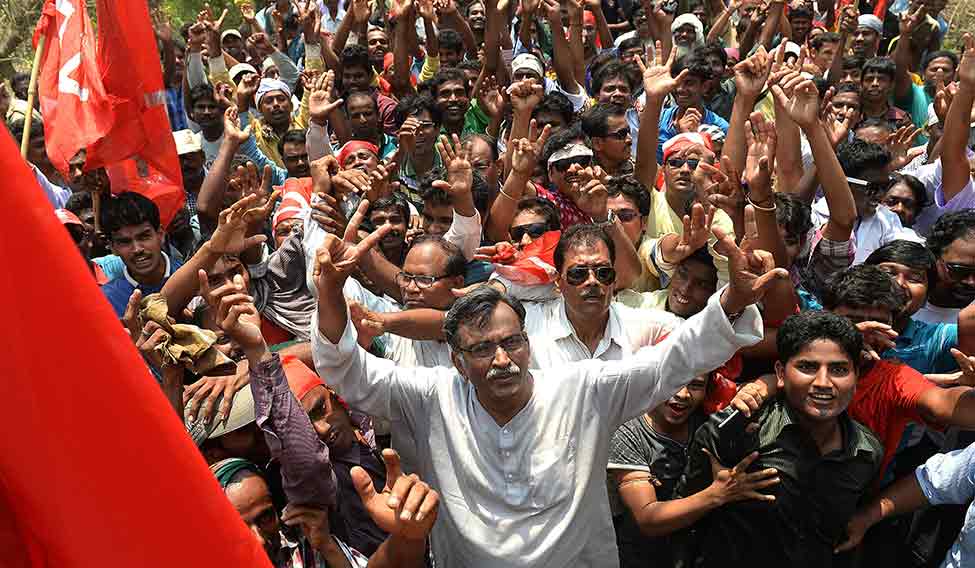 You have been campaigning for a month. How has the response been?

You will get an idea seeing our election rallies. My political opponent [Mamata Banerjee] is saying she is the candidate in all 294 seats. She lands at venues in a helicopter, and people rush to see her. But her rallies are going empty.

The rallies of our left, secular and democratic candidates are brimming with people. Mamata has become nervous, jittery and apologetic.

The CPI(M) has not fielded any surprise candidates. In past elections, all parties have fielded celebrities, as they can win elections.

We have seen celebrities being elected. But if we go by their attendance and performance in Parliament and the assembly, many have failed miserably.

For us, the election is a political battle in which burning problems people face are discussed and debated.

Congress leaders say you would be the chief minister if the left-Congress alliance wins. But why don't you announce it?

One of the principles of our parliamentary democracy is that the chief ministerial candidate is decided after the election. We believe the practice should be continued.

But the situation in West Bengal demands special measures, like the CPI(M) tying up with the Congress.

Yes, but let the people decide first. It is ultimately they who create history.

Many people say the CPI(M) is underestimating its strength. The party ruled West Bengal for 34 years. Despite being dislodged from power, not a single leader was booked on corruption charges. Why are you not tom-tomming it?

We chose to focus on the present regime, which has looted the state, rather than glorifying our tenure. Money and muscle power are becoming mainstays of Bengal politics—unlike never before.

Now, casino capitalism has flourished in the state. Add to that unemployment and lack of industrialisation.

You said Bengal is communally polarised. Were you talking about the growth of the RSS?

Absolutely. The RSS is making a big progress in Bengal, thanks to the current chief minister. RSS branches have grown by about 160 per cent. Also, match-fixing between [Prime Minister Narendra] Modi and Mamata is going on.

We are also assessing the other side of the coin—minority extremism. The Burdwan blast exposed it. Jamaat-ul-Mujahideen modules have sprung up in our state. We have to change this trend.

Was this the reason behind tying up with the Congress?

It was one of the reasons.

If voted to power, would you promote industrialisation in Singur?

Yes, of course. People there are suffering. They now want industries to be set up. We will negotiate with the Tata group. Since they had acquired land, they would be given first priority. Otherwise, we will urge them to sell the land to us and we will set up new industry.

Some top CPI(M) leaders have said the party, if voted back to power, would seek revenge on the Trinamool Congress.

Never. I have made it clear that no Trinamool worker would be touched. We will not resort to vindictive politics. Even those Trinamool leaders who have abused and threatened us will not be harassed.

Buddha da will not be able to travel. He may campaign in Kolkata once or twice. I have requested Prakash to campaign. But I don’t know whether he would do so.

Your form could not be submitted.
This browser settings will not support to add bookmarks programmatically. Please press Ctrl+D or change settings to bookmark this page.
Topics : #Game of thrones | #elections | #West Bengal