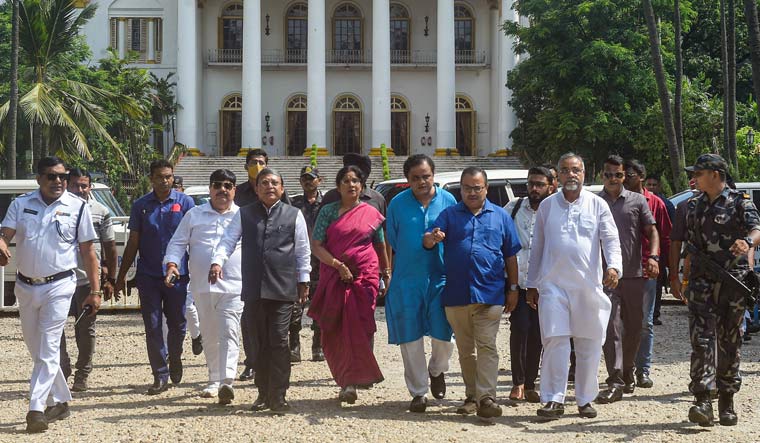 A Trinamool Congress delegation led by Education Minister Bratya Basu met West Bengal Governor Jagdeep Dhankhar on Tuesday and urged him to take initiative for the arrest of leader of opposition and BJP leader Suvendu Adhikari in the Saradha case.

The delegation also consisted of minister Sashi Panja, MLA Tapas Roy, party’s general secretary Kunal Ghosh and a few others. Though the leaders were demanding action against Adhikari, the governor reminded them about establishing the rule of law in the state by the government run by their own party.

Minutes after the delegation left Raj Bhavan, Dhankhar issued a statement saying, “To ensure governance in West Bengal in constitutional groove, the governor during his over two hours of interrogation with the delegation, flagged several worrisome aspects and issues.”

“They sought action against LOP for the first time in three years. I flagged several issues of serious concern of governance. Governance in the state of West Bengal is at far distance from the rule of law. The NHRC report is a ground reality,” said Dhankhar.

Basu, after meeting Dhankhar at Raj Bhavan, indicated that apart from seeking action against Adhikari, the ruling party wanted to establish a channel with the governor which was never there before. But the governor’s serious outburst soon after the meeting made the entire delegation speechless.

“We thought he would react sensibly. But he again talked like the BJP chief. If he wanted to inform about what he had told us, he should also have to talk about what we had told him,” said member of the delegation.

Sources in the Raj Bhavan indicated that in the meeting, the governor listened to the delegation's charges against Adhikari and told them that he had nothing to do about the investigation which had been carried out by the CBI as being asked by the Supreme Court.

The TMC has been training its guns on Adhikari after Saradha boss Sudipta Sen in a recent letter mentioned that he had given money to the BJP leader.

Surprisingly, a Congress MP on Tuesday said that Chief Minister Mamata Banerjee had held a series of meetings with Sen that her 2011 election was funded by Sen.

The TMC delegation also interestingly included Kunal Ghosh, who had written a letter to the CBI while being in jail seeking action against a pack of TMC leaders in the case, including Banerjee.