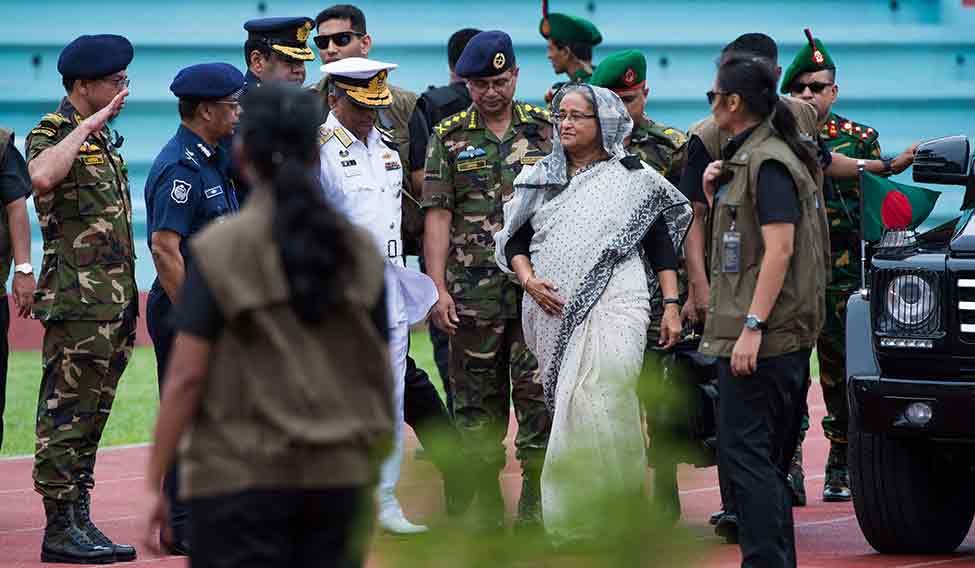 Mounting trouble: Bangladesh Prime Minister Sheikh Hasina at a memorial service for those killed in the Dhaka attack | AFP

Bangladesh has finally woken up to the Islamic State challenge

A few weeks before islamist terrorists killed 22 people at the Holey Artisan Bakery in Dhaka on July 1, two Bangladeshis were hailed as the “most favoured soldiers” by Islamic State in its mouthpiece, Dabiq. One of them, Abu Jandal, had died fighting in Syria six months earlier, and the other, Tamim Chowdhury, was called the brightest jihadi in Bangladesh. It turned out that Tamim, the chief of Islamic State in Bangladesh, was the brain behind the bakery attack.

A Canadian citizen (his father was a businessman in Canada), Tamim left Bangladesh in the 1990s as a student. He married a Canadian woman, but left Canada in 2001 for Afghanistan, where he was trained by Al Qaeda chief Osama bin Laden. Indian and Bangladeshi intelligence knew about him.

The Bangladesh government, which initially claimed the attack was the handiwork of the homegrown Jamaat-ul-Mujahideen Bangladesh, has now admitted the hand of external forces. “We had initially reacted that JMB was the force behind the terror act. Yes they did it. But as reports of investigation are coming up, it was not JMB alone but external forces as well which wanted to tarnish the image of Bangladesh,” Information Minister Hasanul Haq Inu told THE WEEK. “It seems Islamic State was the real brain.” It was the first time that Bangladesh admitted Islamic State's presence in the country.

Inu said security forces were close to cracking the case and all details would be made public. “Our investigating agency has found that a section of leaders of the Bangladesh Nationalist Party [the main opposition] had the knowledge of the incidents going to take place,” he told THE WEEK.

BNP general secretary S.I. Alamgir, however, said the investigation was a “complete eyewash”.

Acting on a tip off, Dhaka Police on July 18 arrested the pro-vice chancellor of North South University where two slain terrorists, Nibras Islam and Rohan Imtiaz, studied. “We had information that principal Giasuddin Ahsan and another teacher, Nurul Islam, helped the boys stay at a rented house in Sherpara area, a posh locality.” said Asaduzzaman Mia, commissioner of police.

Some documents released by Islamic State say Bangladesh is strategically positioned for it to operate in the subcontinent. It said it would start “guerrilla warfare” in India. The documents refer to the entire region—Bangladesh, West Bengal and Myanmar—as Bengal. A day after the Dhaka attack, Islamic State released audio and video clips in Bengali, asking Muslim youth not to sleep till they enforced sharia in their country.

The documents condemn the Bangladesh Army, one of the biggest contributors to UN peace keeping forces. “They earn good salaries and perks because of the UN missions. So they are rallying behind the superpower in the west. Also, political outfits, whoever comes to power, make a deal with the army; otherwise they would be removed from the power. We ask the army officers to repent before we get hold of them and start slaughtering them. They should take lessons from Iraq and Egypt,” said a document written in Bengali.

Islamic State considers the BNP no better than the ruling Awami League. “The BNP congratulated the cow-worshipping Indian Prime Minister Narendra Modi. How can that party be different from the present political outfit that rules Bengal?” asked Tamim in an interview with Dabiq.

Experts say Islamic State had for long plans for Bangladesh. “First it started killing bloggers who are secular Bangladeshis. Then it started isolating Hindus, Christians and Buddhists. Each killing was done meticulously. It formed a team and guided from the Middle East or even in India. After around 60 individual killings it declared its base in Bangladesh and carried out the deadly attack inside Holey Artisan,” said Major General (retd) K.K. Ganguly, an Indian expert on Bangladesh affairs.

“We did not think that Islamic State could do this to our land,” said Cultural Minister Asaduzzaman Noor. “When there were killings here and there, we thought our homegrown terrorists were behind the crimes. We saw them as isolated cases. But now we have woken up and are taking a hard stand against the terrorism.”

BANGLADESHI AUTHORITIES DO not know where hundreds of missing youth have gone. The government came to know about Abu Jandal's Islamic State connection only when the outfit declared him a martyr. Son of an affluent Dhaka businessman, Jandal left Bangladesh in 2012 to attend a conference in the UAE. From there he went to Afghanistan to get arms training. He joined Islamic State last year and went to Syria. “He was killed and buried in the land of Khalifa,” said a report in Dabiq.

Islamic State wants Bangladeshi jihadis to wage the war at home. “Rather than sacrificing your lives here, it would be better if you change the order in your own country,” said an Islamic State document published last year. The document said Bangladesh, West Bengal and Assam would soon become free.

Noor admitted the government had no idea how many youth had left the country but blamed parents and the changing social structure for the entire mess. “Parents don’t have time even to give good education to their boys,” he said. “This is the reason most of the boys who are reportedly missing are from affluent families.”

The government has decided to conduct a door-to-door survey to find out how many boys are missing. It is also planning a permanent mechanism to track those who leave the country.