In June 2010, the India-Bangladesh border at Jaintia hills in Meghalaya was unusually tense after a senior officer of the Border Guard Bangladesh (BGB) asked his men to open fire on the Indian Border Security Force (BSF). The BSF did not retaliate because of an order from Delhi to desist from any sort of escalation. Home minister P. Chidambaram wanted peace to prevail on the border as there was an India-friendly government in power in Dhaka. “There was a clear instruction to all border outposts along the 4,100-km Indo-Bangla border that the BSF would have to reduce the firing on the zero line even if they were attacked,” said a senior BSF officer, who was in charge of the operation. The other side, however, did not reciprocate the sentiment of peace, he said. Although the Awami League government under Prime Minister Sheikh Hasina had asked the BGB not to open fire, the commanding officers on the border refused to listen.

“We called up Delhi for permission to return fire as they had already fired more than 5,000 rounds. Next morning, we were told that there could be some mild retaliation. But, by then, we had suffered heavy casualties,” said the officer. When the BSF officers in Shillong called up the colonel in charge of the BGB outpost, he said he would teach them a lesson. “Don’t expect from us what our government does for you,” said the colonel. On June 24, when a peace meeting was convened, the BSF officer told his superiors that he would keep away if the BGB colonel was present. “Senior army officials in Bangladesh persuaded the colonel not to attend the meeting,” said the BSF officer.

Six years later, the mindset of the BGB and the Bangladesh army has not changed, although firing on the border has come down. Alarmed by a mutiny in 2009, the government had altered the structure of the BGB (then Bangladesh Rifles), giving the army more supervisory powers. “Today there is no difference between the Bangladesh army and the BGB. That is why the BGB listens to the army headquarters rather than to the government,” said the BSF officer. “When we were there, we got the feeling that a majority of the army and the BGB were indifferent to India-Bangladesh friendship. Only a small section of the force supports the Awami League government.”

Some senior pro-government army officers, in fact, expressed fear that the Bangladesh government could be brought down by radical groups with the support of a section of the army. THE WEEK has learned that the Bangladesh government has shared such an apprehension with New Delhi. The Indian Army and the pro-government officers of the Bangladesh army are working together on the issue by sharing intelligence. A team comprising members from Bangladesh’s army, air force and navy visited the Indian Army’s eastern command at Fort William in Kolkata on December 16 and reportedly discussed these issues. “The senior officers of both sides met that day. But I have not got any such information regarding this,” said Wing Commander S.S. Birdi, spokesperson for the eastern command.

THE WEEK ACCESSED a document, which revealed that terrorist outfits Jamaat-ul-Mujahideen Bangladesh (JMB), patronised by the Jamaat-e-Islami Bangladesh, and the Harkat-ul-Jihad-al-Islami Bangladesh (HuJI) were working in tandem with international terror outfits Jaish-e-Muhammad and Lashkar-e-Taiba. The JMB has recently distributed an audio tape of JeM chief Masood Azhar to its cadres. Indian intelligence sources said Sahidul Alam Rahaman, head of the JMB, recently travelled to the US from Pakistan. “Other top leaders of the JMB are fanned out all over the world. In a recent message, they have threatened to unleash major terror attacks in Bangladesh. Rahaman is also coordinating with the LeT and the JeM. In Bangladesh, radical forces are out to instigate the people, especially the youth,” they said. These groups have recently set up a branch of the Islamic State in Bangladesh.

Major General (retired) K.K. Ganguly, an expert on Bangladesh, said the Arab world was the real financier of the JMB and the Jamaat. “The JMB and other outfits have sent a number of Bangladeshi youth to Syria. They are now out to overthrow the Bangladesh government,” said Ganguly.

An officer in the Indian Intelligence Bureau said the IS had radicalised a large number of people in Bangladesh. Terror outfits in Bangladesh feel that the IS tag would attract more youth. Bangladeshi sources said the IS unit was born out of several splinter groups of the Jamaat following the arrests and executions of its senior leaders for the 1971 war crimes. The IS branch, headed by a person called Mahmud Islam, has been circulating propaganda documents to prospective cadres in different parts of Bangladesh and in three districts of West Bengal—Malda, Murshidabad and Nadia, which have a significant Muslim population. Recently in Malda, radical Islamist forces used a remark by a Hindu right-wing activist to unleash arson and violence. They burned down the Kaliachak police station where police records of many terrorist leaders were kept. It could affect the National Investigation Agency's probe into the nexus between Kaliachak’s terror network and its fake currency racket. 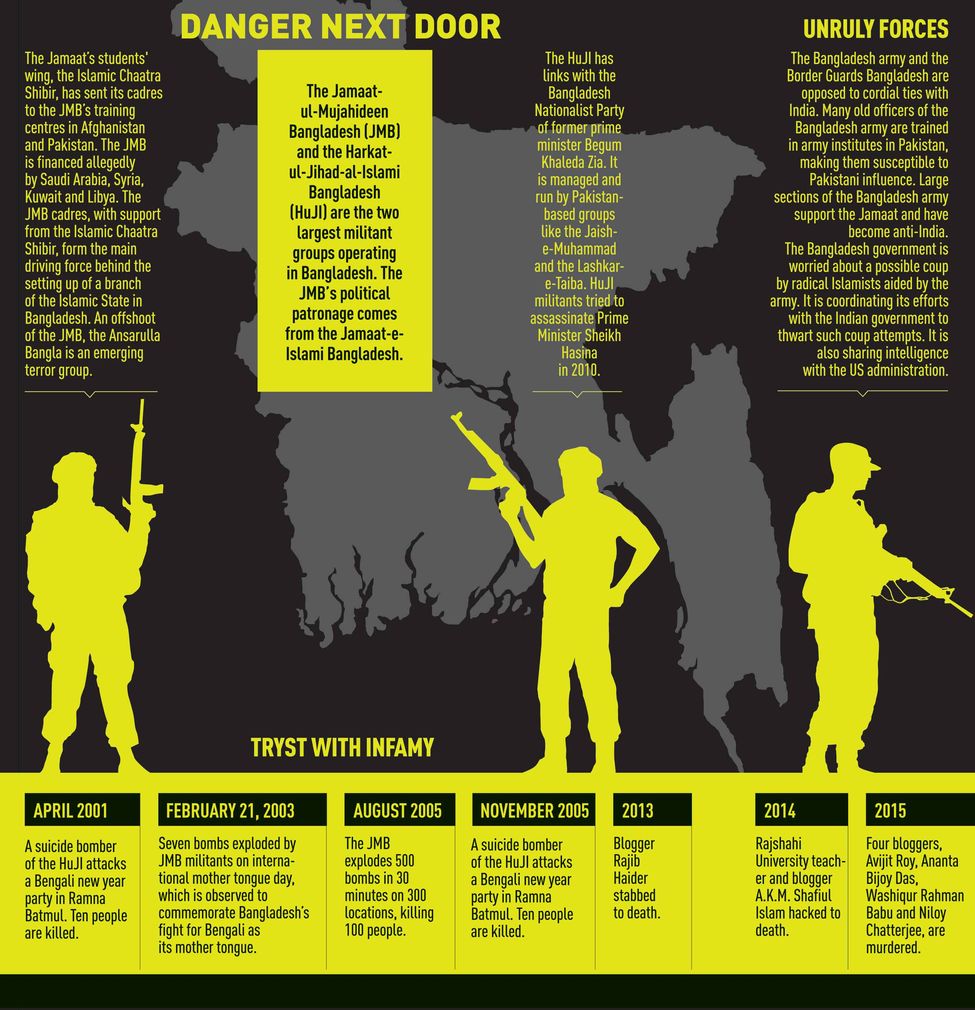 “After the Burdwan blasts, we have seen how the JMB militants were operating deeply within India. Similarly, if the IS is successful in Bangladesh, it would be a catastrophe for the eastern part of India,” said Ganguly.

AJOY ROY, father of Avijit Roy, the US-based blogger who was murdered on the streets of Dhaka, has no doubt that the IS is growing in Bangladesh. “I am sure that my son was killed by terrorists who have now formed the Bangladesh branch of the Islamic State,” he said. “The way he was murdered, with his throat being slit, was an act of absolute cruelty. Yes, they have come and set up their units. I am sorry we have surrendered to them. We need to attack them to save ourselves, the people of Bangladesh,” said Roy.

The document with THE WEEK, which is written in Bengali, quotes IS chief Abu Bakr al-Baghdadi extensively. “We will have to stick to our policy of killing Muslims who are anti-Islamic. We are not at all bothered if our enemies come to fight us. In fact, it gives us strength that we are on the right direction.” It called upon the people of Bangladesh to leave the country and attack it from outside.

While the Jamaat acknowledged that it was opposed to the Sheikh Hasina government, it denied the charge that it was behind the setting up of the IS branch. Said Shafiqul Rahaman, the acting chief of the Jamaat, “No doubt the present government is a curse for us. It is eliminating our leadership through fake trials. It should go. But we are not carrying out any attacks now. We have no hand in setting up the IS branch. We also condemn the Pathankot attack.” When asked about the murder of the four bloggers, Rahaman said the bloggers themselves were responsible. “They demeaned Islam and wrote against the Prophet. But we do not support the murderers.” 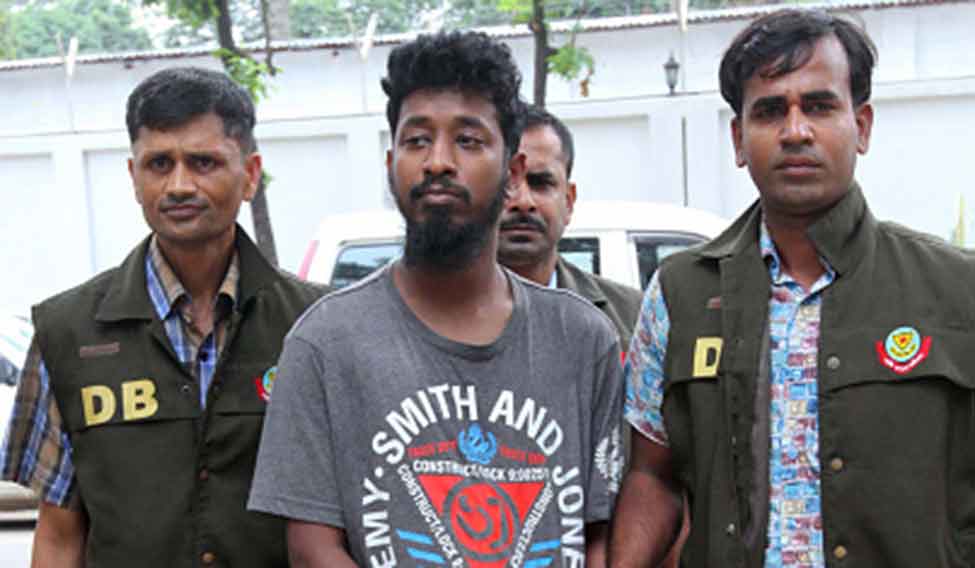 Caught in the act: Abdullah Al Galib, son of a former army officer, who was arrested on charges of floating an organisation like the Islamic State | Getty Images

AWAMI LEAGUE LEADER and former commerce minister Mohammed Farooq Khan said Bangladesh today was full of religious fanatics. “The killings of the bloggers have shown that there are a number of religious fanatics who are intolerant and ready to kill people.” He said the government was trying its best to control them. “Look how many people were executed for the 1971 war crimes. This means we are serious. We are working closely with India as India, too, would suffer if we fail,” said Farooq. Though he was not sure whether the IS had been launched locally, he said the government was working hard to negate the effects of radicalism. He said that after the Pathankot attacks, the Awami League was scared and the authorities were jittery. “We are not ruling out anything. Our country is on a high alert and we are working with the Indian government to save our government and our people,” he said.

According to Bangladesh strategists, a section of the army was against improving ties with India. They opposed the decision to hand over wanted men like Anup Chetia and Arvind Rajkhowa to India. Some of them were also against signing the extradition treaty with India. Moreover, the army has a number of Jamaat sympathisers, who would like to see a return of former prime minister Begum Khaleda Zia of the Bangladesh Nationalist Party to power. With Jamaat as her coalition partner, a government under Khaleda Zia would enjoy huge support from the army and the paramilitary forces. It has become a major cause of concern for Indian policy makers and the defence and intelligence establishments.

But the Bangladeshi government remains steadfast in its resolve to fight back. “Our prime minister has made it clear that our government would not bow down,” said Asaduzzaman Noor. “Just as we are punishing the human rights violators of 1971 now, Bangladesh will punish terror outfits. This time, the danger is that the name of the Islamic State is being used as a strategy by the terror groups. We are not taking it lightly. We are happy that India is with us in our war against terror.”